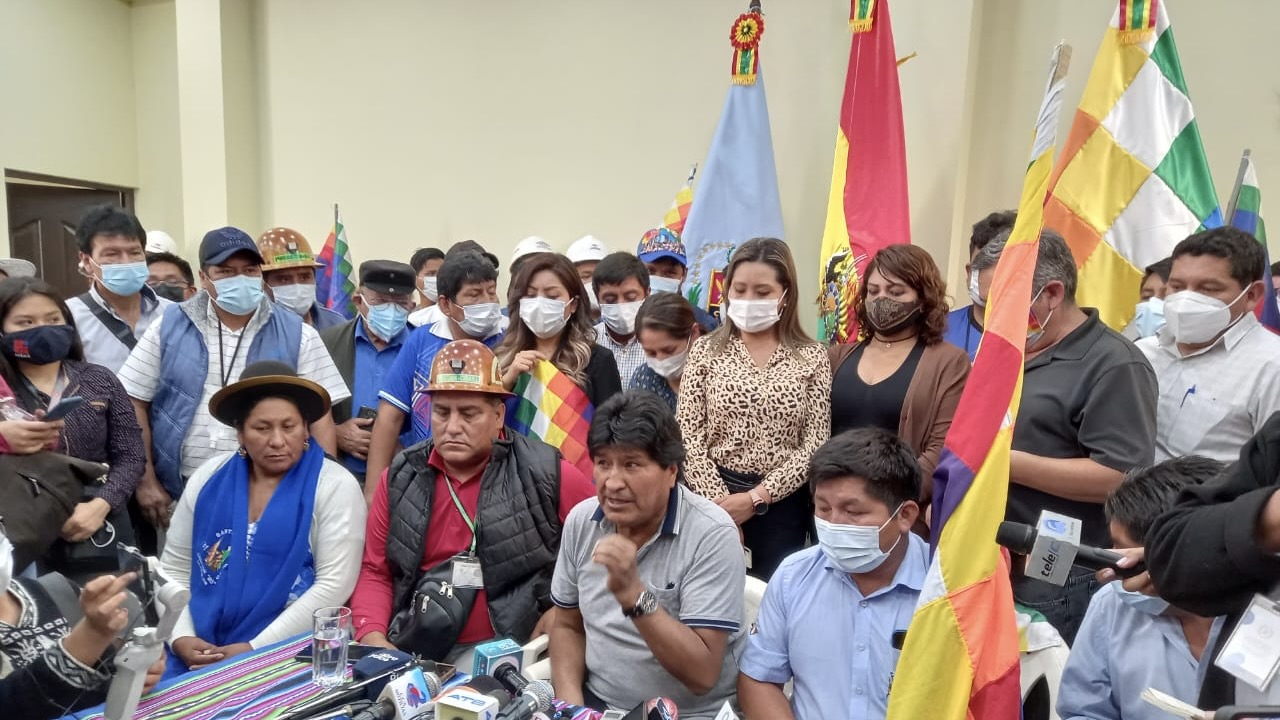 On October 4, the General Staff of the People for the People, a platform of social organizations in Bolivia, declared their support for the pro-government mobilizations on October 12. Photo: Evo Morales/Twitter

Indigenous and social movements of Bolivia will hold nationwide mobilizations on October 12, Indigenous people’s day, in defense of democracy, the Indigenous Wiphala flag, the process of change, and the socialist government of president Luis Arce.

Former president and the current head of the ruling Movement Towards Socialism (MAS) party and president of the trade union Six Federations of the Trópico of Cochabamba, Evo Morales, made this announcement during an interview with Radio Kawsachun Coca on October 3. Morales informed that a large demonstration would be held in Cochabamba city and a huge march in the capital La Paz.

“We call for a large demonstration on October 12, in Cochabamba, in honor of the Wiphala, in defense of president Luis Arce and our democratic and cultural revolution,” Morales tweeted later.

The supporters of the MAS in Cochabamba announced that they would mobilize in the department on October 12 during a public event on October 2. Yesterday, on October 4, at a press conference, the Board of the People for the People, a platform of social organizations, also declared their support for the actions next week.

The mobilizations in support of the national government have been organized in rejection of a march and a national strike called for by the far-right organizations against the government, on October 10 and 11, respectively.

On October 1, Bolivia’s Prosecutor’s Office summoned the opposition leader, former presidential candidate, and governor of the Santa Cruz department, Luis Fernando Camacho, to testify over his role in the 2019 coup d’etat. The same day, the Pro Santa Cruz Civic Committee gave the call for these anti-government demonstrations, accusing the government of alleged “political persecution” and calling it the “masista dictatorship.”

In response to the allegations, presidential spokesperson Jorge Richter told Radio Kawsachun Coca that the leaders of the “civic” movements seek the destabilization of the government and impunity for those responsible for the 2019 civic-military coup and the massacres of those who resisted it in the streets.

The civic committee has also rejected the Bill to Fight Against the Legitimization of Illicit Profits and Financing of Terrorism, with which the government seeks to attack high-level criminality in the country. Richter commented that the conservative groups have taken the law as a reference against them.

Meanwhile, in face of the maneuvers of the right-wing forces striving for immunity, the relatives of the victims of the massacre in Sacaba city in Cochabamba declared themselves in a state of emergency and warned that they would mobilize at national level if those responsible were not brought to justice.

Racist attacks against the Wiphala

The October 12 mobilizations have also been called against the insults to the Wiphala, a national patriotic symbol recognized by the Constitution, by Camacho and his supporters on two recent occasions.

On September 24, Camacho’s followers, in his presence, lowered a Wiphala from its mast shortly after it had been hoisted by vice president David Choquehuanca at the city’s central plaza during an event commemorating the 211th anniversary of the first Cry of Liberty in Santa Cruz. They shouted racist slogans against the Indigenous people and the MAS government and said that they don’t feel represented by this Indigenous symbol.

On September 28, the flag that represents the struggle for recognition and equality of the Indigenous people suffered another attack. A group of assembly members of the Creemos party, led by Camacho, removed it from its place in the Santa Cruz government building.

The Bolivian people gathered yesterday in La Paz to demand respect for the indigenous wiphala flag. This follows racist attacks against it from the opposition. pic.twitter.com/YPzN3UWPws

Morales considered the acts as “racist and outrageous.” He explained that during the October 12 mobilizations, each participant will mobilize holding a Wiphala as an act of atonement to the sacred symbol of the Plurinational State of Bolivia.

President Arce also urged Bolvians to respect the Wiphala. “Wiphala is to be respected brothers, because it is a language, it is history, it is the summary of the entire struggle of our Indigenous people, of our country, and it will not be erased at the whim of one or a group of people,” he said on September 17 during an event commemorating the anniversary of the La Paz department.

Since the progressive government has assumed office and has begun the process to seek justice for the numerous crimes committed by former ministers and officials of the coup-installed government, the right-wing forces in the country, who collectively led the coup in 2019 against the then-president Morales, have been accusing it of political persecution of the opposition leaders and trying to escape justice.

In August, the Executive Committee of the Permanent Assembly of Human Rights of Bolivia (APDHB) warned that a plan to break the de-facto president of the coup regime, Jeanine Áñez, out of prison was being organized by the main opposition leaders, including Camacho, and the Pro Santa Cruz Civic Committee. At that time, her children and allies were asking that she be transferred to house arrest on medical grounds.

This happened a few days after the Interdisciplinary Group of Independent Experts (GIEI) of the Inter-American Commission on Human Rights (IACHR) presented its report on the acts of violence and human rights violations committed during November and December 2019 and confirmed that de-facto government was responsible for massacres, torture, persecution, illegal detention and summary executions of those who protested in the streets. The report also confirmed that the violence was characterized by ethnic and racial discrimination.

Last week, on October 2, the criminal investigation court of La Paz extended the preventive detention of Áñez and two of her former ministers -former justice minister Álvaro Coimbra and former energy minister Rodrigo Guzmán-, for another five months. They were arrested by the authorities on March 13 in the coup d’état case and were charged with crimes of “terrorism, sedition and conspiracy.”

This has added to the worries of the local authorities of Santa Cruz, a strong base of right-wing groups and oligarchy in Bolivia. Camacho and his father, José Luis Camacho, both have been accused of allegedly financing the extremist groups to riot and paying the military and the police to oppose the then-democratically elected government of the MAS party by various social and political leaders. 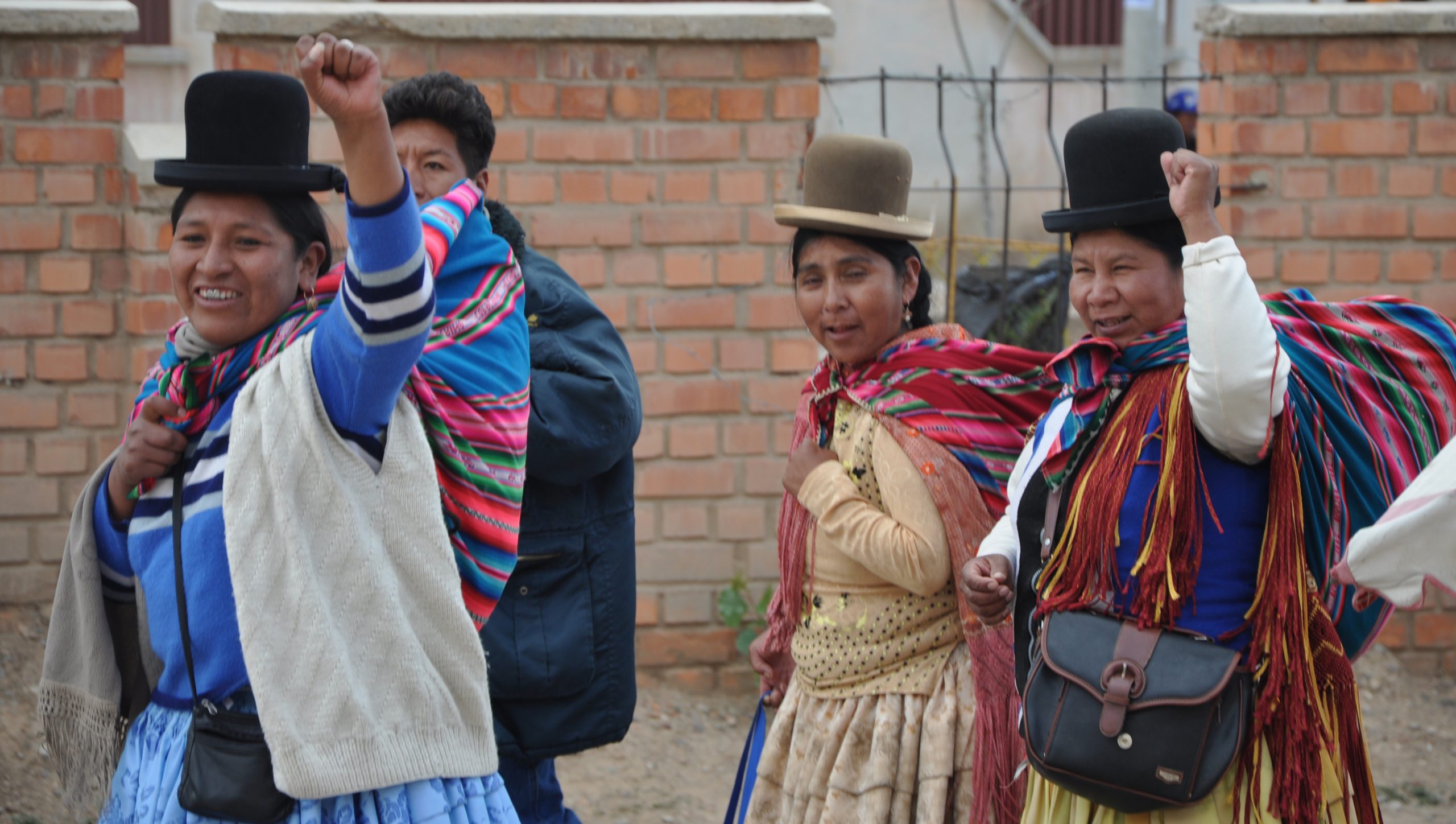