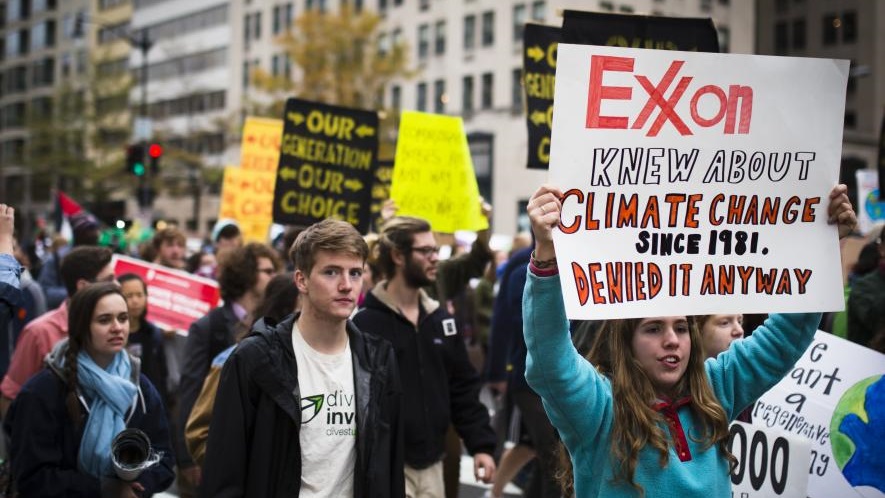 When then-ExxonMobil lobbyist Keith McCoy conceded in a secretly recorded video in May that the oil giant voiced support for a carbon tax only because it assumed it would never happen, ExxonMobil CEO Darren Woods said the company was “shocked by these interviews” and stood by its “commitments to working on finding solutions to climate change.”

Wood’s reaction was reminiscent of Captain Louis Renault feigning surprise to discover gambling at Rick’s Café in the 1942 film “Casablanca.” After quietly pocketing his winnings, Renault justifies closing down the nightclub by exclaiming, “I’m shocked, shocked to find that gambling is going on in here!”

Woods was shocked? Really? Just one look at his company’s financial records would show that despite claiming to endorse a carbon tax—initially in a cynical attempt to derail a cap-and-trade bill that was under consideration in 2009—ExxonMobil has funneled millions of dollars over the last decade to lawmakers who staunchly oppose the idea.

One tried-and-true way corporations ensure access to Congress is by making campaign contributions. Although there may not be a verifiable quid pro quo, donations guarantee access, and access guarantees influence.

So, given ExxonMobil’s professed support for a carbon tax, one might reasonably assume that the company’s political action committee (PAC) and employees would back lawmakers who sponsor such legislation and, over time, withdraw their funding for senators and representatives who stand in the way.

In fact, the opposite is true.

During the video interview, McCoy—who at the time was ExxonMobil’s senior director of federal relations—compared lobbying Congress with fishing.

“When you have an opportunity to talk to a member of Congress,” he said, “I liken it to fishing, right? You know you have bait, you throw that bait out…. And… [then you start to] reel them in…. They’re a captive audience. They know they need you. And I need them.”

The goal, he explained, is to develop a close relationship with legislative staff. “You want to be able to go to the chief… and say, look, we’ve got this issue, we need Congressman So-and-So to be able to either introduce this bill, we need him to make a floor statement, we need him to send a letter,” he said. “You name it, we’ve asked for everything.”

Not quite everything. ExxonMobil apparently has not asked for a carbon tax, notwithstanding the fact that the company was one of the founding members of the Climate Leadership Council (CLC), a bipartisan, industry-supported group, which was formed in 2017 to promote a carbon tax, and a year later, the company pledged to give $1 million over a two-year period to Americans for Carbon Dividends (AFCD), the council’s lobbying arm. Over the last decade, members of both houses have voted on a handful of carbon tax-related amendments and nonbinding resolutions. In every case, a sizable majority who received donations from ExxonMobil’s PAC and employees rejected the idea. For example:

The disparity between ExxonMobil’s PAC donations to supporters of the July 2018 Scalise resolution and its opponents is even more telling, given that PACs—which can contribute as much as $10,000 to a candidate per two-year cycle—more accurately represent a company’s agenda than that of individual employees. The ExxonMobil PAC contributed more than $935,000 to 74% of the resolution’s supporters, but only $109,500 to opponents during the 2018 election cycle. Scalise, the resolution’s sponsor, and 37 of his 48 resolution cosponsors received ExxonMobil PAC contributions.

The most recent congressional carbon tax vote took place in the Senate in February during a round of votes on the pandemic relief bill. John Hoeven (R-ND) sponsored an amendment that would have prohibited such a tax. It was rejected on a strict party-line vote: All 50 Republican senators voted for the amendment; all 50 Democratic senators voted no.

ExxonMobil PAC donations to those senators are mostly party-line, too. Twenty-seven of the 50 Republicans collectively have received $233,000 during the 2018 and 2020 election cycles. Over that same time frame, the PAC contributed just $62,000 to 11 of the Democrats.

In January 2018, ExxonMobil Vice-President of Public and Government Affairs Suzanne McCarron reaffirmed the company’s support for a carbon tax, the Paris climate agreement and other related climate policies in a blog post on the company’s website. ExxonMobil, she maintained, is “committed to being part of the solution.”

Nevertheless, during the 2018 and 2020 election cycles, ExxonMobil employees and its PAC donated nearly $834,000 to 28 of the 30 senators and 90 of the 109 representatives currently in Congress who, according to the Center for American Progress, still reject the scientific consensus that global temperatures are rising and that burning fossil fuels is largely to blame. The company’s PAC funded 16 of the climate science deniers in the Senate and 81 in the House.

Despite this decidedly lopsided funding pattern, McCoy insisted during the interview that ExxonMobil wants to work with lawmakers on carbon tax legislation. “Put forth a bill and we’ll show you that we’ll support that bill, we’ll help you work on that bill,” he said. But, he added, “Nobody wants to do that because it’s not politically expedient to put forth a tax for people, it just isn’t.”

In fact, a number of lawmakers have “put forth a bill” to establish a carbon tax in successive congressional sessions, but the company has shown no support, and neither McCoy nor ExxonMobil’s other in-house lobbyists have broached the topic with members of Congress since 2018—the same year it announced its $1 million donation to the Climate Leadership Council’s lobbying arm, AFCD—according to ExxonMobil’s quarterly lobbying reports.

Staffers working for Rep. Larson and Sen. Whitehouse, who both have been sponsoring carbon tax legislation for years, recently verified that ExxonMobil has not expressed support for their respective proposals. Larson introduced a bill in 2009, the same year that ExxonMobil announced that it favored the policy, while Whitehouse first sponsored one in 2014 and has reintroduced a version of it in every session since.

Out of frustration, Whitehouse and his fellow bill sponsor, Sen. Brian Schatz of Hawaii, sent a letter to ExxonMobil in August 2016 criticizing the company for its indifference.

“Regarding ExxonMobil’s alleged seven years of support for a carbon fee, we’ve seen no meaningful evidence of that,” the senators wrote. “None of the top executives that make up ExxonMobil’s management team has expressed interest in meeting with any of us to discuss the Whitehouse-Schatz proposal or any carbon fee legislation.”

Five years later, nothing has changed on that front. A Whitehouse spokesperson says his office is not aware of ExxonMobil supporting any carbon pricing legislation, let alone the senator’s.

But McCoy’s revelations did have consequences: The Climate Leadership Council kicked ExxonMobil out of the organization in August; the Union of Concerned Scientists and other public interest groups cited McCoy’s comments in a “friend of the court” brief filed in Minnesota’s climate science deception lawsuit against ExxonMobil; and the House Committee on Oversight and Reform asked McCoy to testify about his company’s campaign to mislead the public “about the dangers of fossil fuels and their role in causing global climate change.”

As for McCoy’s job status, an ExxonMobil spokesperson told E&E News in late September that “McCoy no longer works for the company.”

If McCoy does wind up testifying before Congress, he would serve as the opening act for a hearing that the Oversight Committee plans to hold on October 28 featuring his former boss Darren Woods and top executives from other major oil and gas companies. Finally, under oath, Woods and his colleagues will have to answer questions about their decades-long effort to block government action on climate.

Elliott Negin is a senior writer at the Union of Concerned Scientists.

This article was produced by Earth | Food | Life, a project of the Independent Media Institute.