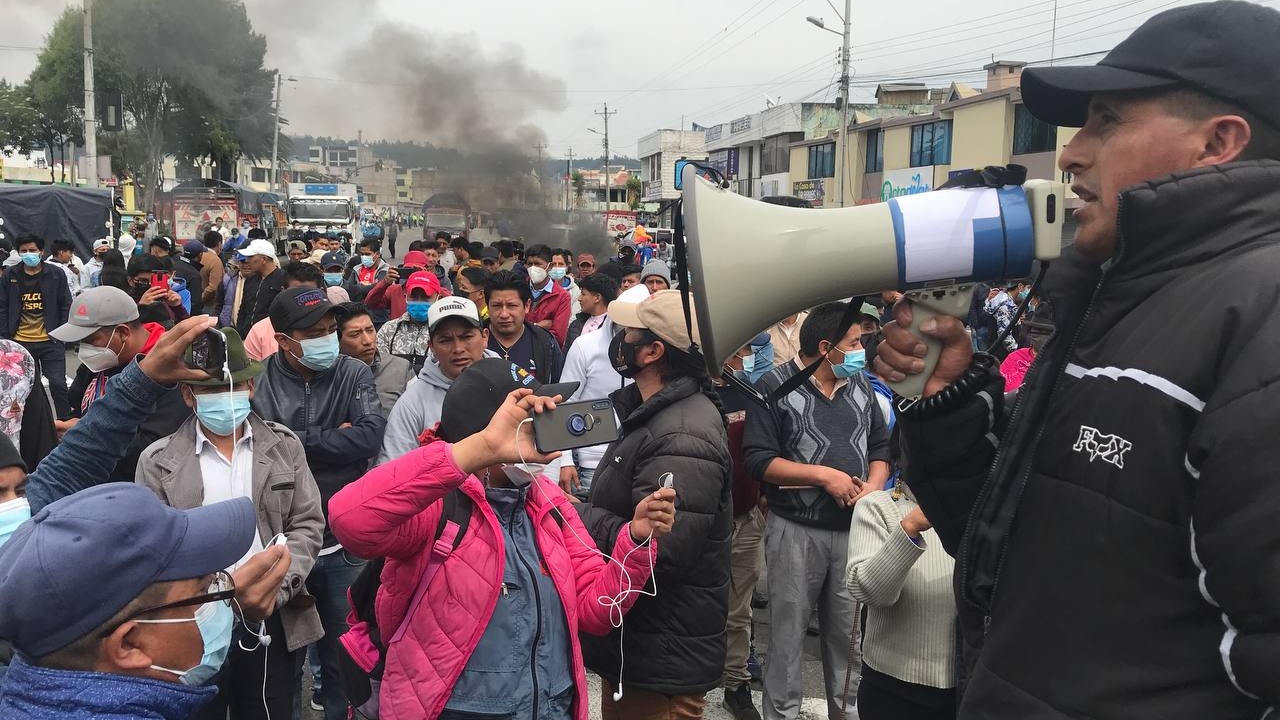 On October 26, thousands of Ecaudorians took to the streets across the country in rejection of an overwhelming increase in fuel prices. Photo: CONAIE/Twitter

On Wednesday, October 27, tens of thousands of Ecuadorians participated in mobilizations across the country for the second consecutive day against neoliberal economic policies of the government of President Guillermo Lasso. In some cities, protesters blocked the roads. In the capital Quito, officials of the national police force repressed the peacefully demonstrating protesters. The call to continue the mobilizations for a second day was given on the late night of October 26, after various demonstrations in different parts of the country were violently repressed by the police and military forces and over three dozen people were detained.

A day prior, as part of the national day of protests, workers, teachers, students, peasants and members of social movements and Indigenous organizations mobilized in large numbers in all provinces of the country in rejection of a recently approved reform, which increased fuel prices by 10%. In various parts, the protesters organized road blockades to express their dissatisfaction, despite the fact that it has been prohibited due to the 60-day state of emergency declared in the country to allegedly fight gang violence.

The October 26 protests were the largest anti-government protests in the five months of Lasso’s administration. According to reports, the security forces repressed at least three protests with tear gas and other repressive methods, including the one in Quito near the presidential palace.

The call for the national mobilization was given by the Unitary Front of Workers (FUT), the Popular Front (FP) and the Confederation of Indigenous Nationalities (CONAIE) on October 22. It received the support of the Federation of University Students of Ecuador and the National Confederation of Peasant, Black and Indigenous Organizations, among other organizations.

On October 22, Lasso repealed the decrees, passed by former president Lenin Moreno, which increased the price of petrol and diesel on a monthly basis until they matched international prices. However, he fixed the price of regular gasoline at 2.55 USD and the diesel at 1.90 USD, which far exceeds the current prices in the world market.

Those on the streets are demanding that the national government freeze the prices at 2 USD for regular gasoline and 1.50 USD for diesel, keeping in mind the hardships faced by the working class and the lower-income sectors, which have worsened due to the impact of the pandemic.

Leonidas Iza, the president of CONAIE, told local media that they had been forced to take the measure of protest because the government had refused to listen to their demands. “On several occasions, social leaders have spoken with Lasso to seek consensus on economic matters. Since we have not achieved any results, we must exercise our right to peaceful protest,” said Iza. “Oil is indispensable in all productive and commercial activities. An increase in its cost makes the price of all products more expensive. The neoliberal policies of the president make us back down on our rights,” he added.

The protesters also are demanding the immediate release of the people arrested on the previous day. They are also asking the authorities to support the draft Labor Code recently presented to the Legislature by the FUT. Likewise, they have expressed their complete rejection of the Law for the Creation of Opportunities, recently proposed by the government.