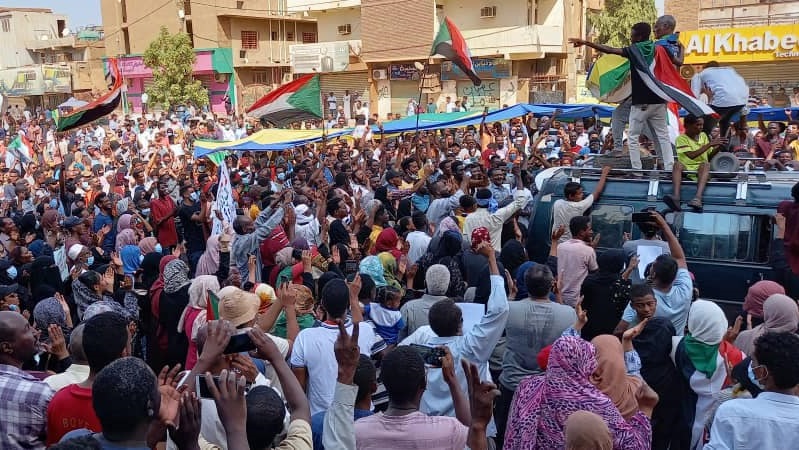 At least three protesters are confirmed to have been shot dead. An unverified count places the death toll at eight. Scores were injured, many grievously, as the army and the notorious militia called the Rapid Support Forces (RSF) opened fire at several marches.

The full scale of the casualties is yet to be known as the internet and telecommunication services remain largely cut off in the country since the coup on October 25.

Prior to the marches on Saturday, 11 protesters were already reported to have been killed and at least 150 injured in the country-wide protests after the coup.

Until Saturday, the majority of the protests were largely held in neighborhoods, behind the barricades raised by the youth. On being confronted, the protesters’ tactic had been to disperse and reassemble to raise new barricades, thus keeping the security forces stretched thin across the country.

On Saturday, however, main roads and highways across Sudan were swarmed by protesters marching in kilometer-long rallies, vastly outnumbering the security forces. Transportation was paralyzed across the country.

In Khartoum State, the bridges over the Nile connecting its three cities – the capital city Khartoum, Khartoum North and Omdurman – were closed by security forces. However, all the three cities witnessed multiple large demonstrations within.

Images and videos emerging from Khartoum alone show main roads of the city – including Al-Sahfa street, East Nile street, Abdullah Al-Tayib street and Sixty street – thronged by mass rallies. Multiple rounds of fire were opened on a rally passing behind the airport (shut since the coup), on its way to Sixty Street.

Casualties, if any in this incident, remain unknown. In Omdurman, three protesters were killed after being shot in the head by snipers, a source told Peoples Dispatch. There are other casualties in Omdruman who have survived bullet injuries.

Outside Khartoum, massive rallies were also witnessed in the States of White Nile, North Kordofan, El Gezira, Kassala, Red Sea, West Darfur, South Darfur etc. Observers have pointed out that these States, which have repeatedly suffered armed tribal violence, had seen the emergence of a civil society mainly as a consequence of the mobilizations for the December Revolution of 2018-19.

The rallies in Darfur region are of particular significance because most of the armed rebel groups here, which claim to represent its marginalized sections, have joined forces with the military after the Juba peace agreement of October 2020 and supported the coup.

The large participation in the actions here indicates the decreasing clout of these armed groups and increasing acceptance of the leadership of the civilian revolutionary forces.

The country-wide action on Saturday “is not a passing cloud… Crowds and revolutionary forces will not retreat from peaceful resistance, occupation of the streets, public political strike and comprehensive civil disobedience will continue,” said the Sudanese Professionals Association (SPA).

The SPA is a trade union coalition affiliated to the Sudanese Communist Party (SCP), which along with the Resistance Committees organized locally in neighborhoods, had spearheaded the December Revolution. This mass uprising forced the army to remove the former dictator Omar al-Bashir in April 2019. Demanding transfer of state power to civilian authority, the revolutionary forces had continued to struggle against the military junta which had subsequently assumed power.

However, after the massacre of protesters by the RSF outside the army HQ in Khartoum on June 3, 2019, the centrist and right-wing parties in the Forces of Freedom and Change (FFC) – a coalition of political parties and grassroots organizations formed to represent the December Revolution – struck a deal with the military.

Full civilian rule is the demand

This resulted in the formation of the now-dissolved transitional government in August 2019, in which power was shared between civilian leaders chosen by these parties and the military generals who held top positions under Bashir’s regime.

Protesting this power-sharing arrangement, the revolutionary forces, which stuck to their demands for full civilian rule, withdrew from the FFC. But they had continued to support the coalition from outside by mobilizing its mass following on the streets, hoping to strengthen the hand of the government’s civilian leaders in dealing with the military.

However, with the latter controlling the defense policy, foreign policy, internal security and most of the economy, the civilian leaders wielded little real power to solve the deep economic and security crisis the country has been reeling under for decades.

The limited power of the civilian forces in the government was further undermined by the Juba peace agreement. This agreement states that in case of a contradiction, it overrides the constitutional document in which the power-sharing between the FFC and the military was outlined.

The agreement thus ended up facilitating a deal where the armed forces won over the rebel groups by offering a share in state power. This was done in a manner that ate into the power-share promised to the FFC in the constitutional agreement.

Most of the Juba signatory rebel groups went on to form a separate coalition which, with the backing of the security forces, had begun demonstrations calling on the army to carry out a coup and dissolve the government to rid it of the civilian sections chosen by FFC.

In the meantime, it became clear to increasing sections of the masses that little hope could be placed on the FFC to face up to the armed forces within the confines of the transitional government. The revolutionary forces declared that they no longer supported this government, and would confront the military directly through street actions for full civilian rule.

Only days before the coup, on October 21, a ‘March of Millions’ was held. Slogans against the compromise and partnership between civilian political parties and the military resounded on the streets of Sudan.

The protest movement after the coup has continued with this slogan. Meanwhile, the ministers in the ousted transitional government chosen by the FFC acknowledged in a statement on Saturday that the revolutionary forces had rejected the power-sharing arrangement with the military. However, the statement added, the FFC had accepted such an arrangement hoping to reduce bloodshed and to prepare for a “transition towards democracy and complete civil rule.”

The SCP’s position at the time that compromises with the military, which cannot be trusted to act in good faith, will not lead to a transition to civil rule now stands vindicated. The revolutionary forces, which had held an unwavering position vis-a-vis the military, command the majority on the streets today.

Yet, after the coup, both media coverage and the response of key powers seems to have failed to capture this radical rejection of any alliance with the military. Instead they have chosen to focus on less expansive demands. For instance, various organizations have reported that a key demand of the protesters has been the restoration of the transitional government in which the military was the dominant player. This is even as the streets have explicitly rejected this option.  For instance, the SPA has insisted that the struggle is neither for the release of the arrested ministers nor even for the restoration of the transitional government. The SPA has pointed out that this will not be accepted as an alternative to full civilian rule.

On October 28, the UN Security Council went on to call on “all stakeholders to engage in dialogue without pre-conditions.” US president Joe Biden also said the “Sudanese people must be allowed to.. restore the transitional government.” Biden further elaborated that the restoration of the “institutions associated with the transitional government” should be done “in accordance with the constitutional announcement of 2019 and the Juba Peace Agreement 2020.” glossing over the above-indicated inherent incompatibility of the two documents.

Meanwhile, the SPA, in a statement on October 30, gave a call for the overthrow of military rule through an intensification of political strike and civil disobedience.

It has set as an immediate goal the formation of a new fully civilian government, composed of representatives chosen by the revolutionary forces, and tasked with arresting and putting on trial the now ruling military generals accused of committing crimes against Sudanese people.

Other radical tasks to be entrusted to the revolutionary government include: reforming the security sector; taking control of the vast portion of Sudan’s economy currently owned by the military; dissolution of state-backed militias and armed rebel groups and their integration into a single professional national armed force; and reorientation of the foreign policy away from the participation of Sudanese forces in western backed military interventions led by Gulf neighbors.

“With the Western and Gulf powers controlling most large media houses, they are bound to censor the radical content of the December Revolution,” a protester from SCP had earlier remarked to Peoples Dispatch. He added, however, that “they may control the media. But we control the streets here”. 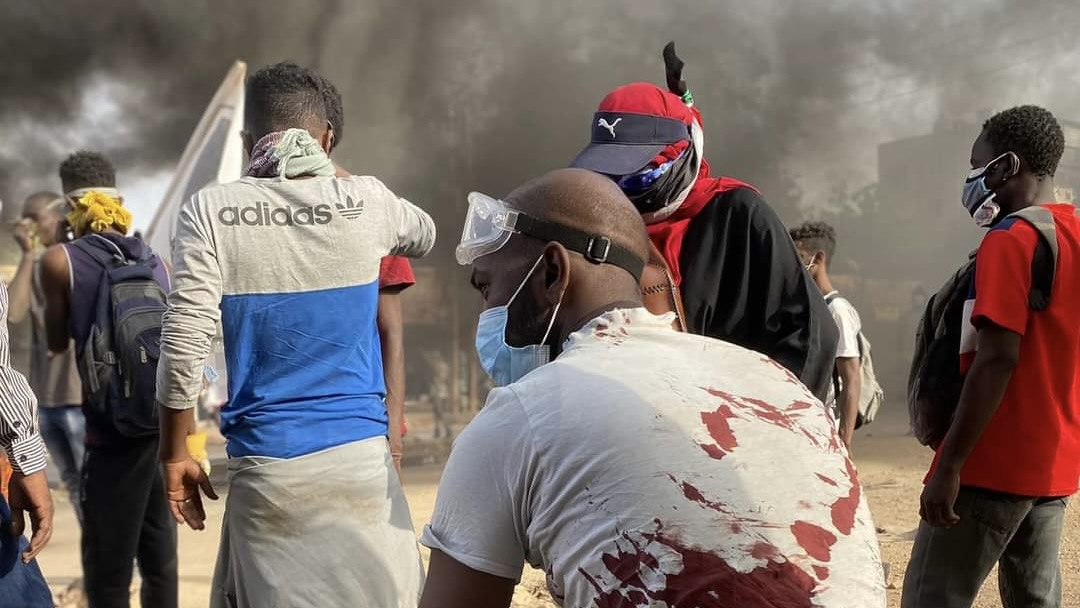