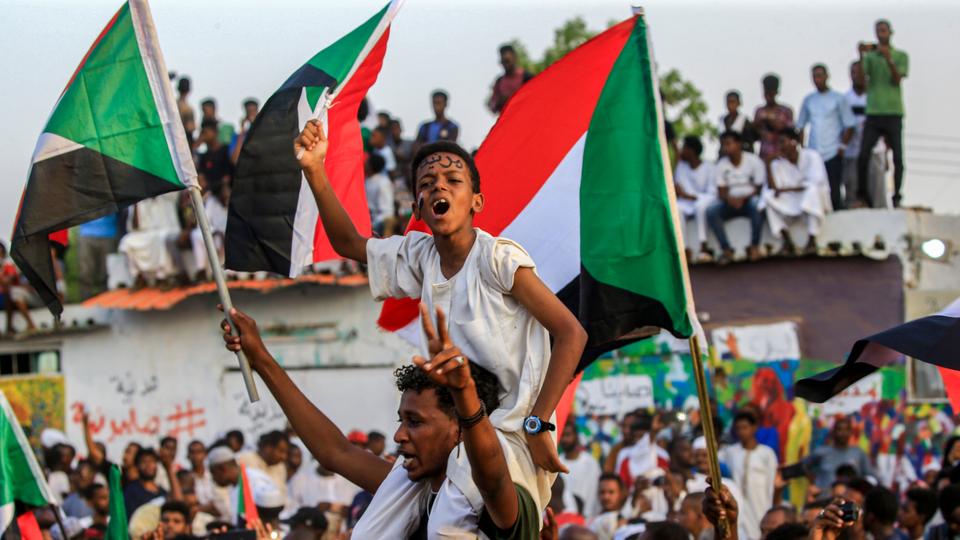 The Sudanese military junta and civilian protesters reached an agreement on July 5 on the transitional government for 39 months. Photo: AFP

As jubilant masses of protesters on the streets of Sudan celebrate their victory after the military junta agreed to deal on the transitional government, the Sudanese Communist Party (SCP) has cautioned them to be vigilant against any betrayals.

The SCP urged the protesters to keep up the pressure on the military junta by maintaining a presence on the streets. In a statement on July 6, it warned against complacency and against compromising with the agenda set for the transition period in the Declaration of Freedom and Change that was adopted by civilian forces in  January.

In pursuit of this agenda, its is necessary to negotiate an end to the civil war, pull the Sudanese troops out of Yemen and close foreign military bases in the country, the SCP said.

On July 5, the military junta and civilian forces reached an agreement on a transition period, which will last for 39 months before elections are held. During this period, the country will be administered by a three-tiered structure.

One of these structures is the legislative council, 67% of whose members will be appointed by the Declaration of Freedom of Change Forces (DFCF) – a coalition of political parties including the SCP and unions which together represent the protest movement.

The entire cabinet (or the council of ministers) will be appointed by the DFCF, which will also have five members in the 11-member presidential council. Five members will be military officers appointed by the junta and the remaining member will be a civilian with a military background who is acceptable to both sides.

“The public has.. been surprised by the presence of members of the military junta in the presidential council, [even] after recognizing the massacre,” the statement said. The massacre refers to the killing of over a 100 people in Khartoum on June 3 by a militia under the control of the vice-president of the junta, general Mohamed Hamdan Daqlo

Under the circumstances, “how do we ensure that the military junta implements the agreement?”, the statement asked.

Observers have pointed out that even if the government is formed as per the July 5 agreement, the presence of members of the military in the presidential council could hamper the pursuit of certain agenda.

This is because this council will have the final say in matters of declaration of war and participation in joint military exercises with foreign countries. General Dagalo had earlier reassured Saudi Arabia and the UAE that it would continue to support its war against Yemen. It is estimated that about 14,000 Sudanese troops are deployed in Yemen.

In order to have “balanced international relations for the benefit of the people of Sudan”  – which is one of the agendas set out in the Declaration – “withdrawal of our troops from Yemen [and] removal of military bases” is necessary, the SCP insisted.

The presence of military officers in the presidential council may also prove to be an obstacle in negotiating an end to the civil war and investigating the human rights violations committed by the military junta. The junta, known as the Transitional Military Council, assumed power after it overthrew president Omar al-Bashir in April following mass protests.

The resolution of these issues may prove especially challenging during the first 21 months of the transition period when a military officer will be heading the presidential council.

Under such circumstances, the “continued presence of public on the streets until the completion of the democratic transition, the abolition of all laws restricting freedoms.. and dissolution of all the militias” is the only “guarantee of the success of the transition period”, the statement asserted.

The SCP also demanded the lifting of the international embargo on Sudan that has been imposed at the behest of the US. Incidentally, the US has deemed Sudan a “state sponsor of terror”, while at the same time continuing to train and assist its security forces to help them fight the “war on terror”.

The only way to bring an end to these sanctions, which will be a necessary step in addressing the economic crisis affecting the country, is “the establishment of a democratic civilian governance”, the statement concluded.