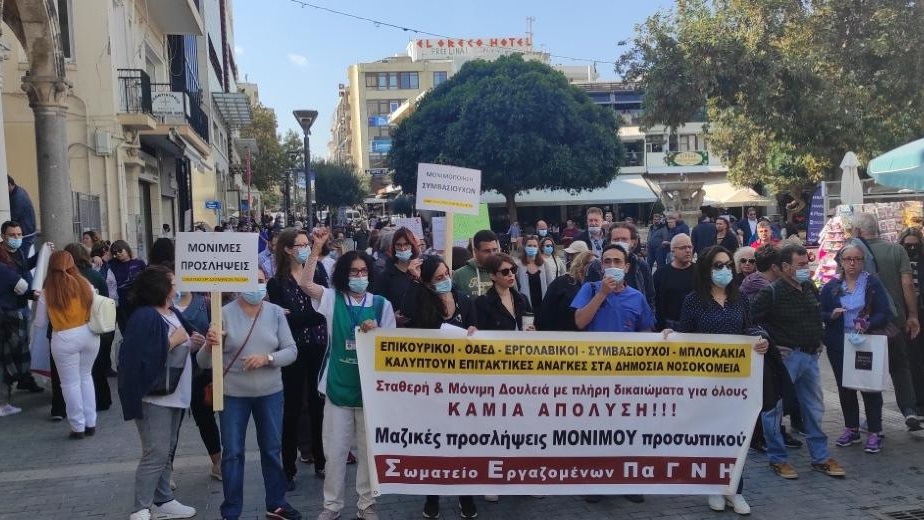 Following the call of the Panhellenic Federation of Public Hospital Workers (POEDIN) and the Federation of Hospital Doctors of Greece (OENGE), more than 1,500 public health professionals took to the streets of Athens on October 21, along with hospital sanitation personnel. Their demands included the strengthening of the public health sector, withdrawal of the suspension of contracts for health workers who did not get the COVID-19 vaccine, hiring of staff under permanent contracts, and increased wages.

In a statement, POEDIN declared: “We’re striking to give a strong, robust response to the government’s mockery that refuses to hire health workers under permanent contracts [..] invoking so-called legal barriers and institutional difficulties.”

The Greek healthcare system has been struggling for over 10 years due to the conditional loans administered by the Troika – the International Monetary Fund, European Central Bank and the European Commission. The conditions included fiscal austerity, drastic cuts in healthcare expenditure and rapid implementation of neoliberal reforms. The pandemic has further aggravated the situation. The public sector is characterized by tragic shortages of healthcare professionals and long waiting periods for medical appointments and scheduled operations, thereby forcing patients to seek help in the private for-profit health sector and bear the cost of their treatment.

So far, the government has been taking advantage of the pandemic to reinforce the privatization of the healthcare sector by promoting public-private partnerships, contractual agreements and merging of healthcare units. The enormous deficit of healthcare workforce that the pandemic highlighted was covered – albeit partly – with healthcare professionals on temporary contracts. A fleet of already overworked, burned-out personnel has been working overtime for all this time and official leave from work has been suspended. Numerous healthcare professionals, including opticians and psychiatrists, have been transferred to COVID-19 specialized units without training or adequate personal protective equipment.

In July, the government announced it would suspend the contracts of health workers who refused to get vaccinated immediately. Instead of investing in combating the roots of vaccine hesitancy, the Greek government decided to jeopardize the success of the national vaccination strategy.

As a result, Michalis Giannakos, the president of the POEDIN, estimates that 10,000 contracts were suspended in the first 10 days following the implementation of this decision, a number that corresponds to 8-12% of the total number of healthcare professionals.

“We cannot afford to lose any more coworkers,” health workers shouted during the demonstration held in Athens in front of the Ministry of Health. “We need money for health, not for war and police equipment,” they said. The latter chant was aimed at the fact that over the past year, the Greek government has spent more than 13 billion Euros for navy ships, combat aircraft and guns, and increased the budget of the Ministry of Justice substantially for police cars, equipment and police personnel. This expenditure should have gone to the health sector during the time of the pandemic.

Amid an already overwhelmed and understaffed healthcare system, the suspension of contracts has pushed it to the brink of collapse. Meanwhile, the supposedly fast-track recruitment that the government had promised faces bureaucratic barriers. “The government is victimizing the healthcare workers, while at the same time it is sweeping the severe problems of the healthcare sector and the mishandling of the pandemic under the carpet,” stated a protester during the demonstration held in Thessaloniki, Greece.

The strikers demanded that their jobs be categorized as difficult and hazardous occupations and their wages be increased to the levels before the Economic Adjustment Programs were signed. “Frontline healthcare workers are sending the message that in spite of the exhaustion, in spite of the feeling of abandonment by the state that does not provide substantial support nor prospect, they will keep fighting to provide the best healthcare services they can. Most importantly, they will keep fighting for a reliable public health system that respects the rights of both its patients and its workers,” added Andreas Xanthos, the head of the health department of the opposition party.

At the start of the pandemic, the government supposedly recognized its wrongdoing of leaving the public healthcare system undefended and committed to strengthening it. They were clapping for the healthcare workers that courageously fought at the front lines against an unknown, invisible and dangerous threat. And here we are, almost two years later, and those same health workers still have to protest demanding the obvious. The people’s responsibility is to stand next to them.

Zoi Parcharidi is a health activist in the People’s Health Movement Greece.