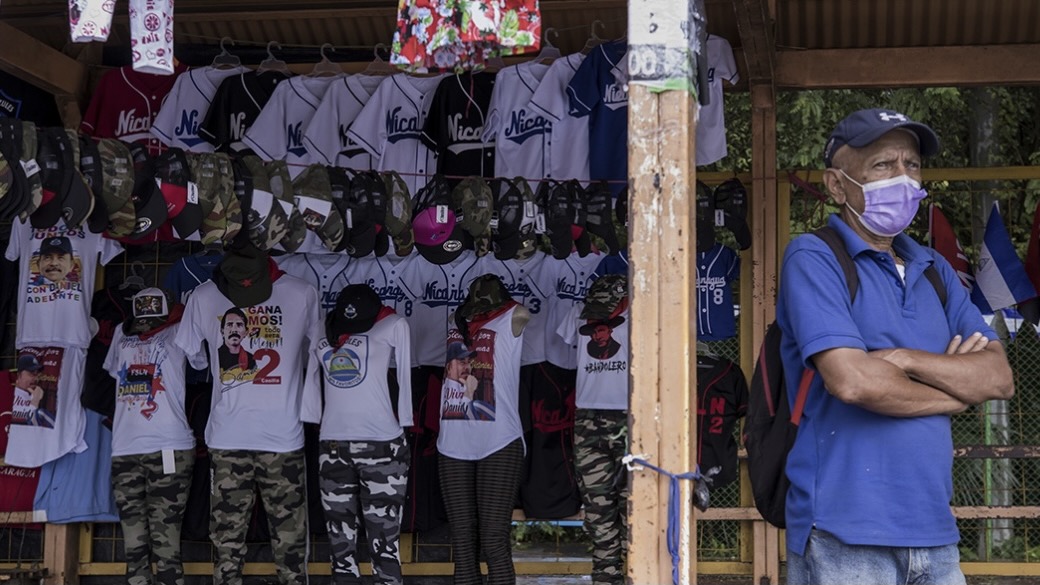 A man waits for a public transportation bus next to a stand that sells T-shirts, flags and hats, with a Sandinista theme, at a bus stop in Managua, Nicaragua, Wednesday, November 3, 2021. Photo: Morning Star

Morning Star journalist Steve Sweeney is unrepentant. He hadn’t even been back home in Britain for 48 hours when he agreed to a phone interview to discuss his three-day detention in a holding cell at Mexico City’s airport. During that period, he had received almost no food, and for the most part no clarity as to why he was being held.

During our conversation, it was clear that he wasn’t feeling one hundred percent. His voice would occasionally break, and more than once he mentioned he would have to find the time to go to the doctor that day to get checked out. Yet, far more important for Sweeney was to get the message out, even at the possible cost to his well-being.

For him, that message isn’t just about his cruel and degrading detention while en route to cover Nicaragua’s November 7 election. It is ultimately about the coordinated campaign to strangle Nicaragua’s sovereignty and self-determination by whatever means necessary. As it happened, he was the only journalist from a British newspaper due to cover the elections. That alone made him a marked man by the imperialist powers-that-be, who were determined on creating the impression that the vote was nothing more than a stitch-up to cement the rule of President Daniel Ortega and the Sandinista National Liberation Front (FSLN).

For Sweeney, who had visited Nicaragua in 2019 for the 40th anniversary of the Sandinista revolution, that notion is ridiculous.

Sweeney’s story of being detained while trying to reach Nicaragua – where he was invited as an observer by the government – doesn’t begin during his inhumane treatment in Mexico City. It began weeks before when he had booked a flight to Managua in which he would have to transit through the United States. As a British citizen, he simply had to fill out the customary US visa waiver known as the Electronic System for Travel Authorization (ESTA). This is generally a simple, 15-minute process that can be done online.

However, the application being made by a Communist journalist seemed to raise a red flag for the US authorities. Asked if he had previously visited Iraq, Sweeney – who has spent months there over the past year documenting US-backed war crimes committed by Turkey against the Kurdish population – had to check “yes”. Furthermore, the draconian changes made to the ESTA under the Trump administration that inquire about an applicant’s social media profiles, haven’t been undone under the Biden administration. In short, he was rejected, banning him from even transiting through the US.

“As I then obviously couldn’t go through the United States, I was looking at alternative options, and I wasn’t going to be kept away from Nicaragua. The only alternative was to fly by Lufthansa to Mexico City via Frankfurt, and then on from Mexico City to get an Aeromexico plane to Managua. Now, I didn’t foresee any particular problems arising from this…I thought this is a safe route.”

Trouble began to brew as soon as he touched down in Mexico City, however. What is usually a rather smooth transit process – though albeit sometimes long, given the numbers of passengers that use the airport as a connection hub – turned into what he calls a “Kafkaesque nightmare.”

“I was at a desk and then suddenly I was forced to relinquish my phone, sign some paper that they gave to me, and asked to fill out a form. I went into a room that had at least 60 plus people – this in a very tiny, tiny room where people were on the floor, people spilling out into the corridors. There was no ventilation. I was very concerned over COVID safety because we’re in the middle of a pandemic.”

At this point, he still saw the events unfolding as a minor inconvenience. Assuming there was some kind of mistake that led him to this holding room, he was optimistic he would make his flight to Managua, which he had a seven-hour window to board. Things soon began to appear to be more politically motivated, however.

“The Mexican immigration authorities said that I didn’t have permission to enter Nicaragua, which was laughable because I was invited as a guest of the Nicaraguan government. I mean, it was it was a really bizarre thing.”

After calling Nicaragua’s Foreign Ministry, it seemed that it had all been sorted.

“Instead of me being allowed to go to check-in, the immigration people took me back to the holding cell. I was locked in again! They said it’s fine, and they told me they, ‘Yes, we have all your papers, all your documents have been approved. Everything’s fine. We’ll come and get you before your flight.’ Then they never came.”

By the time he was seen again by an immigration agent, the Aeromexico connecting flight had long departed.

“I said, what’s going to happen now? They said, ‘Don’t worry, sir. Don’t worry, we’re going to get you on the next plane, sometime before lunchtime.’ Okay, I can accept that. But then they just didn’t show up. They didn’t show up in the morning, they didn’t show up at mid day. I lost the timing a little bit, because you have to remember that there again that the room was constantly, the lights are on. There was no clock. It’s really, really disorientating.”

Compounding an already aggravating situation was the fact that Sweeney – a diabetic – was being refused anything to eat. He has witnessed other passengers in the holding area being given food every few hours. Their respective airlines would come to give them meals, as he says, “four or five times a day.” Yet, when he asked for some food, he was flatly told no.

After having missed his scheduled transfer to Managua, as well as at least one other flight he had been guaranteed he could board, he was presented with an ultimatum – one so dubious that there was no way he could accept the only option that would have theoretically allowed him to arrive in Nicaragua.

“An agent came to me and said, ‘You can either go back to Birmingham, and we’ll put you on a plane this evening. Or, alternatively, we can fly you to Panama, and then to Managua.’ I said, can you explain about this? He said, ‘The flight to Panama won’t leave until later on Monday!” Bare in mind, it was Saturday, so this meant two more days in this cell. The election I was due to cover was on Sunday. I said, what happens when I get to Panama? He said, ‘You have to stay in a detention center in Panama for two days.’”

The absurdity of the proposal left Sweeney baffled. For him, it was not only completely unacceptable, it was also a highly dangerous offer. It would have meant going for days on end with little or no food.

At this point, his hopes of reaching Nicaragua began to dwindle, and it certainly looked as if he was going to miss any part of election day. Finally, after what seemed like an eternity of trying to gain clarity into what motivated his detention and treatment, it all came spilling out courtesy of one of the immigration agents.

“Someone came and told me very clearly that ‘the Mexican authorities have said they do not want you to enter Nicaragua from Mexico, that they are not prepared to allow you to fly there.’ I asked him to repeat it, because this now becomes a political decision taken by the Mexican authorities. He said he was certain of it, and this is why that Panama route has come onto the table.”

With Sweeney’s health beginning to deteriorate, and after having asked for food on “five or six occasions,” desperation began to kick in. He starting looking through rubbish bins for any spare food, eventually stumbling across half a sandwich that he would need to “pick at a bit, but found it to be edible.” At a later point, a family from India that was also in detention was generous enough to offer a few items from their meals, shocked that this man was having to dig through garbage in order to find a few scraps of food.

Eventually, the ordeal ended. Sweeney found himself on a flight at last, but not to Managua, not to Panama, but back to Europe. Although infuriated with the Mexican authorities for their cruel treatment that certainly amounted to torture, his thoughts even at this point were mostly on the bigger picture, of which his detention was a mere microcosm.

Back in Britain, Sweeney is forging ahead with his work – reporting on his detention, reporting an alternative narrative (from afar) about Nicaragua, and calling out the hypocrisy around those who have sought to incorrectly frame his not being allowed to enter the country as the fault of the Nicaraguan government.

“Many of these press freedom advocates have effectively said, ‘Journalists need to be free to report on Nicaragua,’ to which I said that it isn’t Nicaragua that prevented me from doing this. It was Mexico, and it was the United States. This was just a continuation of Washington’s long war against the Nicaraguan people.”

This wasn’t Sweeney’s first detention or the first time he has been banned from entering a country. In 2019, he was set to report on the Turkish elections, covering the campaign of the pro-Kurdish Peoples’ Democratic Party (HDP). The HDP is the victim of what Sweeney calls “the largely political genocide operation in the world,” with over 20,000 members in jail.

Upon his arrival in Turkey, he was quizzed about his views on the Kurdish people, asked to give his views on Kurdistan Workers’ Party (PKK) leader Abdullah Ocalan, and then deported. Being banned from Turkey has clearly made Sweeney heartbroken, who recounts the story with a great deal of sorrow. It’s the same kind of sorrow that is felt when he speaks on not being able to see comrades and friends in Nicaragua.

“There are similarities between my ban from the US and my ban from Turkey. The US is tightening the screws against the Nicaraguan people, on the one hand. On the other, the government of Recep Tayyip Erdogan in Turkey is an outpost of US imperialism and NATO in the region. Both the Sandinistas and the HDP get in the way of this dominance. It’s really no coincidence that on both occasions I was barred from covering these elections.”

If the Turkish authorities and US authorities have seen Sweeney’s work as disruptive of the narrative they feel they are free to peddle, it is a tribute to tenacity of journalism that represents the people. It’s that work, despite all of the obstacles and bans, that he pledges to continue.

Marcel Cartier is an independent journalist.