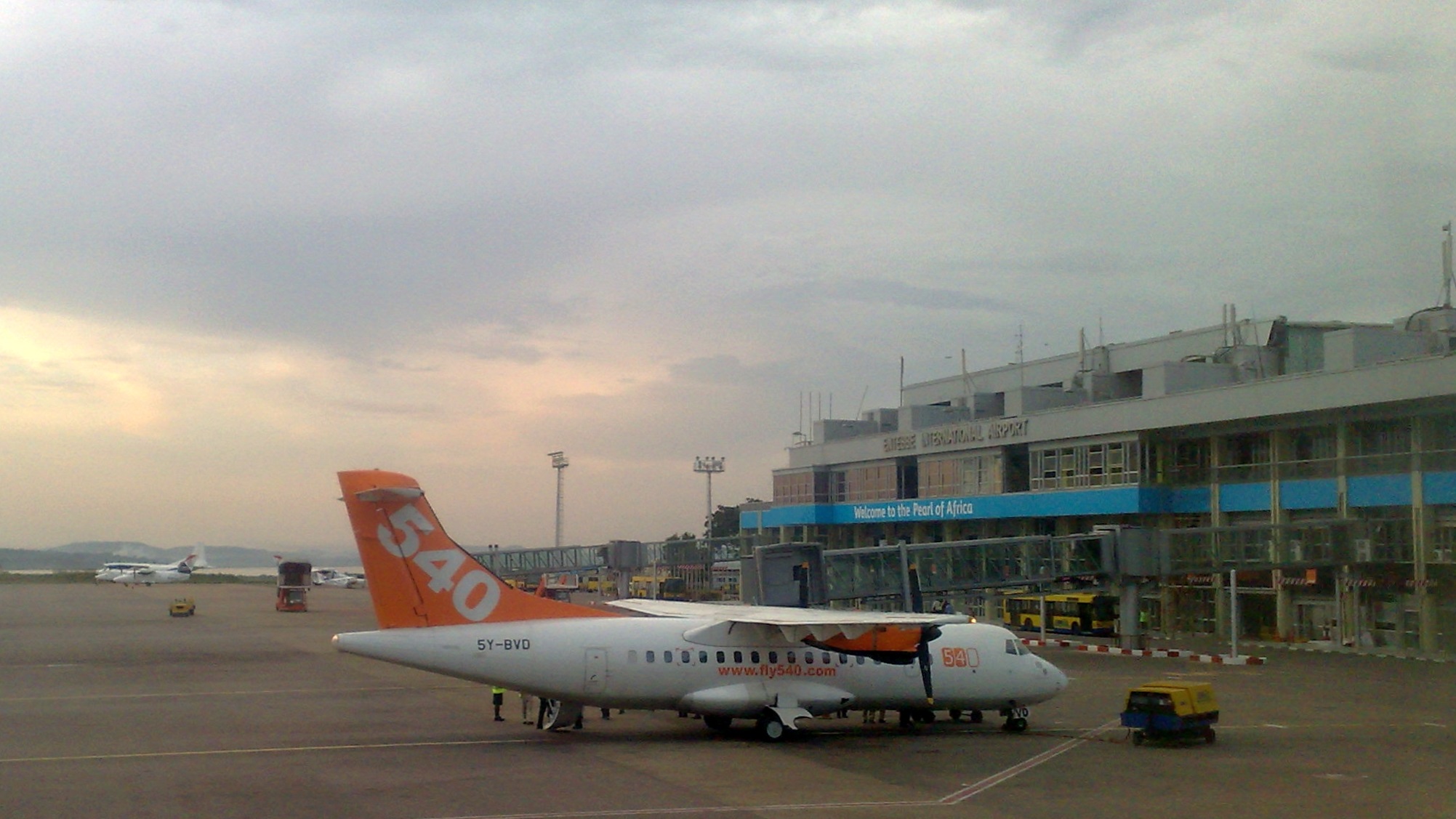 The Entebbe International Airport in 2009. Photo: By PetterLundkvist - Own work, CC BY 3.0, https://commons.wikimedia.org/w/index.php?curid=7028754

On November 25, 2021, an article appeared in Uganda’s national newspaper the Daily Monitor with the headline: “Uganda surrenders airport for China cash.” The article pointed to “toxic clauses” in the loan agreement signed by the Ugandan government with the Export-Import (Exim) Bank of China on March 31, 2015. The loan—worth USD 207 million at 2% interest—was for the expansion of the Entebbe International Airport—a project under the Chinese Belt and Road Initiative (BRI). Work on the expansion of the airport began in May 2016.

The article in the Daily Monitor, which was written by Yasiin Mugerwa, said that the Chinese authorities were going to take control of the airport because of the failure of Uganda to pay off the loan. A few days after the Daily Monitor article, US media company Bloomberg also ran a similar article on November 28 without providing any further details on this news development, as did other US and international outlets. The story by the Daily Monitor, meanwhile, went viral on Twitter, WhatsApp, and beyond.

The story is not new. On October 28, the Ugandan Parliament Committee on Commissions, Statutory Authority and State Enterprises (COSASE) held a hearing on the loan with the finance minister Matia Kasaija (member of parliament [MP] for Buyanja County) in attendance, according to NTV Uganda. Several members of parliament grilled Kasaija about the loan, with Nathan Itungo (MP from Kashari South) asking him if he and his department had been “doing due diligence” within the negotiating framework. Answering this question, Kasaija said, “I think we did, by looking at other agreements that have been signed along the same lines.” While explaining why the government went ahead with the loan agreement for the Entebbe International Airport, the finance minister said of the agreement that Uganda was looking at the “cheapest alternative, and we jumped on it.”

Joel Ssenyonyi, the chair of COSASE, said that many of the clauses in the loan agreement between Uganda and China’s Exim Bank would cause problems, since the termination of the contract based on the clauses would come “at a huge cost.” Kasaija apologized to the parliamentarians and said, “We should not have accepted some of the clauses.” On the fundamental point of the ownership of the airport, Dan Kimosho (MP, Kazo County) asked, “What happens to the Uganda Civil Aviation Authority (UCAA) and the Ugandan Airport if we fail to pay this money?” “I don’t think it’s at risk,” Kasaija said, adding that if there is a problem and the UCAA was unable to generate the revenue required to pay for the loan, “then the central government will step in.”

At no point did Kasaija or any of the other parliamentarians say that China would take over the Entebbe International Airport. The UCAA managers had pointed to 13 clauses that they said were onerous. These included the clauses that give the right to China’s Exim Bank to inspect the accounts of the UCAA and provide for any dispute resolution to go through the China International Economic and Trade Arbitration Commission (CIETAC).

Neither of these two examples, nor the other clauses, are outside the bounds of normal trade practices. In terms of the clause allowing for CIETAC to be the main arbitration panel for the loan agreement, this would not have happened if the World Trade Organization’s Dispute Settlement Body (DSB) was allowed to operate.

Countries of the Global South have long complained about the effectiveness of using the dispute resolution mechanisms of the World Trade Organization—whose function has been compromised by the US blocking of appointments to its appellate body. Meanwhile, US firms continue to take refuge in the US Trade Representative and the powers that stem from Section 301 of the US Trade Act of 1974, “which allowed the United States to take retaliatory action against nations whose trade practices it deemed unfair or discriminatory.”

On November 27, two days after the story was reported by the Daily Monitor, Vianney Luggya, spokesperson for the UCAA, wrote on his official Twitter account, “I wish to make it categorically clear that the allegation that Entebbe Airport has been given away for cash is false.” The government of Uganda, he wrote, “can’t give away such a national asset,” the country’s only international airport. “There isn’t an ounce of truth” in the story, he wrote, dismissing rumors regarding China taking over control of the airport. Luggya further tweeted that the UCAA controls the funds it deposited in the Stanbic Bank Uganda as part of the agreement and that the UCAA remains within the loan grace period of seven years. On his own personal Twitter account, Luggya further clarified that the seven-year “grace period ends in December 2022.”

Flooded with accusations, the Chinese Embassy in Kampala, Uganda, posted a statement on its Twitter account on November 28. The embassy said that the story in the Daily Monitor “has no factual basis and is ill-intended only to distort the good relations that China enjoys with developing countries including Uganda. Not a single project in Africa has ever been ‘confiscated’ by China because of failing to pay Chinese loans. On the contrary, China firmly supports and is willing to continue our efforts to improve Africa’s capacity for home driven development.” The next day, on November 29, China’s foreign ministry spokesperson Wang Wenbin repeated the word “confiscated,” refuting allegations of China’s takeover of Entebbe International Airport and underlining the fact that China has not “taken over” any “China-Africa cooperation project” on the African continent due to nonpayment of loans.

A study by the Center for Global Development in Washington, D.C. shows that none of the Chinese Belt and Road Initiative projects have been the author of debt distress; of the 68 BRI projects, only eight are in countries struggling with debt, but this struggle predates Chinese investment. Close studies of Chinese investment in the Sri Lankan port of Hambantota (published in the Atlantic) and in the African country of Djibouti (published in the Globe and Mail) show that there is no evidence of asset seizure in either of these cases.

In 2020, Uganda’s deputy head of mission to the embassy in China, Ambassador Henry Mayega, said, “China has been a very good development partner to many African countries especially Uganda and that’s why it gives us loans every time we are in need.” Mayega’s comment came at a time of great tension on and around the African continent regarding Chinese investments and relations with African countries. In 2000, the Chinese government, in partnership with several African states, set up the Forum on China-Africa Cooperation (FOCAC). A few days after the Daily Monitor ran its story, FOCAC gathered in Dakar, Senegal, for its Eighth Ministerial Conference from November 29 to November 30. The news from Uganda threatened to overshadow the events across the African continent.

Nonetheless, China’s president Xi Jinping made two announcements that caught the eye: China will provide one billion doses of the COVID-19 vaccine to the continent (600 million as donations and 400 million produced in joint ventures with certain African countries), and China will invest USD 40 billion in the African continent. The announcement of the vaccines comes just as Europe, the US and several other nations shut their doors to Africa after fears and rumors that the COVID-19 variant Omicron—which was declared a variant of concern by WHO—originated from Botswana. This decision to initiate travel curbs against certain southern African countries was harshly criticized for its racism by Dr. Ayoade Olatunbosun-Alakija of the African Union’s African Vaccine Delivery Alliance.

The false story from Uganda did not derail the FOCAC meeting, but it has inflamed public opinion—particularly on Twitter—about Chinese investments.