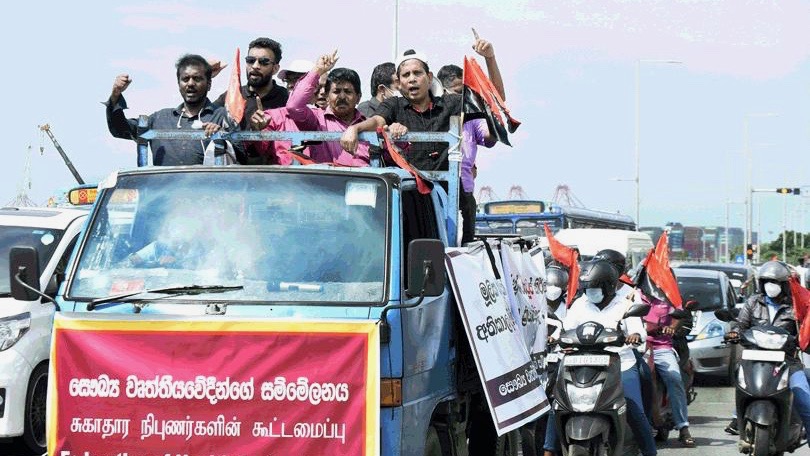 On Wednesday, December 8 , more than 600,000 public servants affiliated to the Sri Lanka Government Officers’ Trade Union Association (SLGOTUA) went on a strike to protest over the government’s failure to solve the salary anomaly issue while cost of living continues to rise.

According to SLGOTUA National Organizer B.A.P. Basnayake, the number of public servants who engaged in the strike action on Wednesday was about 80% of the total cadre.

In a year that has seen repeated price hikes of essential commodities, the workers are demanding that the government raise the salary of public servants by at least 18,000 rupees (USD 89) .

So far, the Gotabaya Rajapaksa government has ignored these demands saying that “there is no possibility of raising salaries under the present circumstances.”

According to The Morning, state-sector employees attached to the Sri Lanka Government Officers’ Trade Union Association (SLGOTUA) had given a call for a one-day strike due to the non-response from the government.

Several workers’ organizations, including the Sri Lanka Public Officers Trade Union Federation (SLPOTUF), an alliance of 35 unions comprising the All Ceylon Development Officers Union, the Agriculture Research and Production Assistants Union and the Sri Lanka Village Officers Union, had said they would participate in the strike.

The strike call by government officers and workers came after a month of agitation by various sections of Sri Lankan society, including development officers, health workers, teachers and electricity board workers, as the state of economic emergency imposed in August continues.

The frequent civil protests this year indicate the public’s anger towards the policy-making of the current Rajapaksa government and its big-business-friendly approach.

Last month, the Teachers’ and Principals’ Trade Union Alliance (TPTUA), which had been staging protests on the salary anomaly issue, was successful in achieving its demand for higher wages after 120 days of demonstrations.

On November 24 and 25, more than 50,000 public sector health workers in Sri Lanka held a two-day sick leave strike to protest the government’s repeated rejection of their demands. In its 2022 budget, the government has announced a six billion rupees cut for the health sector citing the current economic crisis that the island nation is facing.