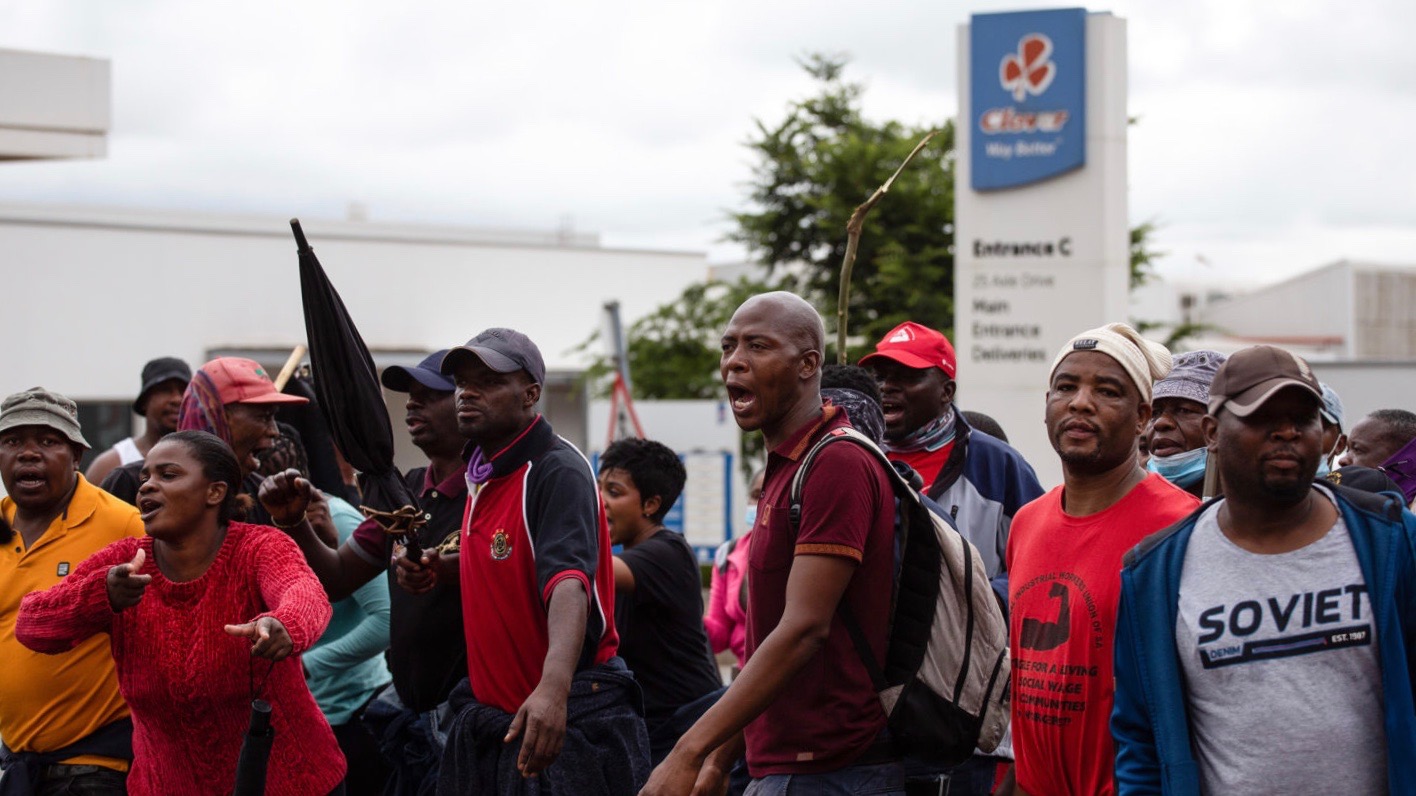 The striking workers at Clover, South Africa’s largest and oldest dairy sector employer, will hold a demonstration outside the office of the minister of economic development, unions stated on Wednesday, December 29. The unions took this decision after a meeting with the minister the previous day.

The General Industries Workers Union of South Africa (GIWUSA) and the Food and Allied Workers Union (FAWU) have been leading the strike by 5,000 employees who have downed tools since November 22.

“In the meeting, [the] government restated what the company said to unions in the negotiations,” the statement said, accusing the government of taking a position against the South African workers and siding with Israeli business interests which took over Clover in 2019.

To get approval from the Competition Tribunal at the time of Clover’s takeover by MILCO, the latter had “promised to create additional 500 jobs, but since then about 2000 jobs have been shed,” the unions complained.

At the meeting, the unions called on the minister “to instruct the Competition Tribunal to declare MILCO and Clover to be in breach of the conditions contained in the authorization of the merger which precludes the employer from retrenching workers or introducing less favorable conditions of employment.”

Apart from planning to retrench another 1,000 workers and closing several branches, the company is imposing several changes in the conditions of employment. These include “wage cuts of 20% across the board”, reduction of the number of assistants per van for loading and unloading goods from two to one, and “Compressed working hours of 12 hour days, 6 day weeks and no rest,” according to the union.

The unions demand that the government, taking note of these violations by MILCO, should nationalize Clover and bring it under democratic control and management of its workers. This demand, unions said, was “all but refused by the minister, leaving us no choice but to embark on mass action against the government and the Department of Economic Development in particular.”

Objecting to Clover’s takeover in 2019, GIWUSA had already complained to the Tribunal that 60% of MILCO is owned by Israeli Central Bottling Company (CBC), which is based in the occupied Palestinian territories.

“Unfortunately, [the Tribunal] dismissed this as a matter outside of its jurisdiction. We condemn such flagrant apathy shown by the Tribunal on a matter of significant moral concern,” said the Palestine Solidarity Alliance.

“International economic measures were imperative to end Apartheid in South Africa. If our lawmakers acted with moral fortitude, such measures would be critical to ending Apartheid in Palestine as well,” its statement added.

“Whilst the government is reluctant to decisively intervene to save jobs and [prevent the] closing [of] factories,” unions complained, “it has not shown hesitance to swiftly deploy police to become the private security guards of Clover for the duration of the strike. This clearly shows the class loyalty of this government, which is not with the Black workers and their communities who will be devastated by factory closures and job loses, but with the bosses who in this case are the Zionist Israeli imperialists.”

This policy of the government has ominous implications for South Africa’s dairy sector, antagonizing not only workers but also South African dairy farmers and consumers, GIWUSA’s president Mametlwe Sebei warned.

“They closed two factories in Western Cape last year. This year, they are closing about four. Within two years of taking over, they have effectively closed six plants. And they are relocating operations from inland to the coastal areas,” Sebei told Peoples Dispatch.

“The only conclusion that can be drawn from this is that MILCO’s primary plan is imports,” Sebei argued. “So it is destroying the production capacity of South Africa’s oldest dairy and maintaining only its distribution network to secure the South African market for imported Israeli products.”