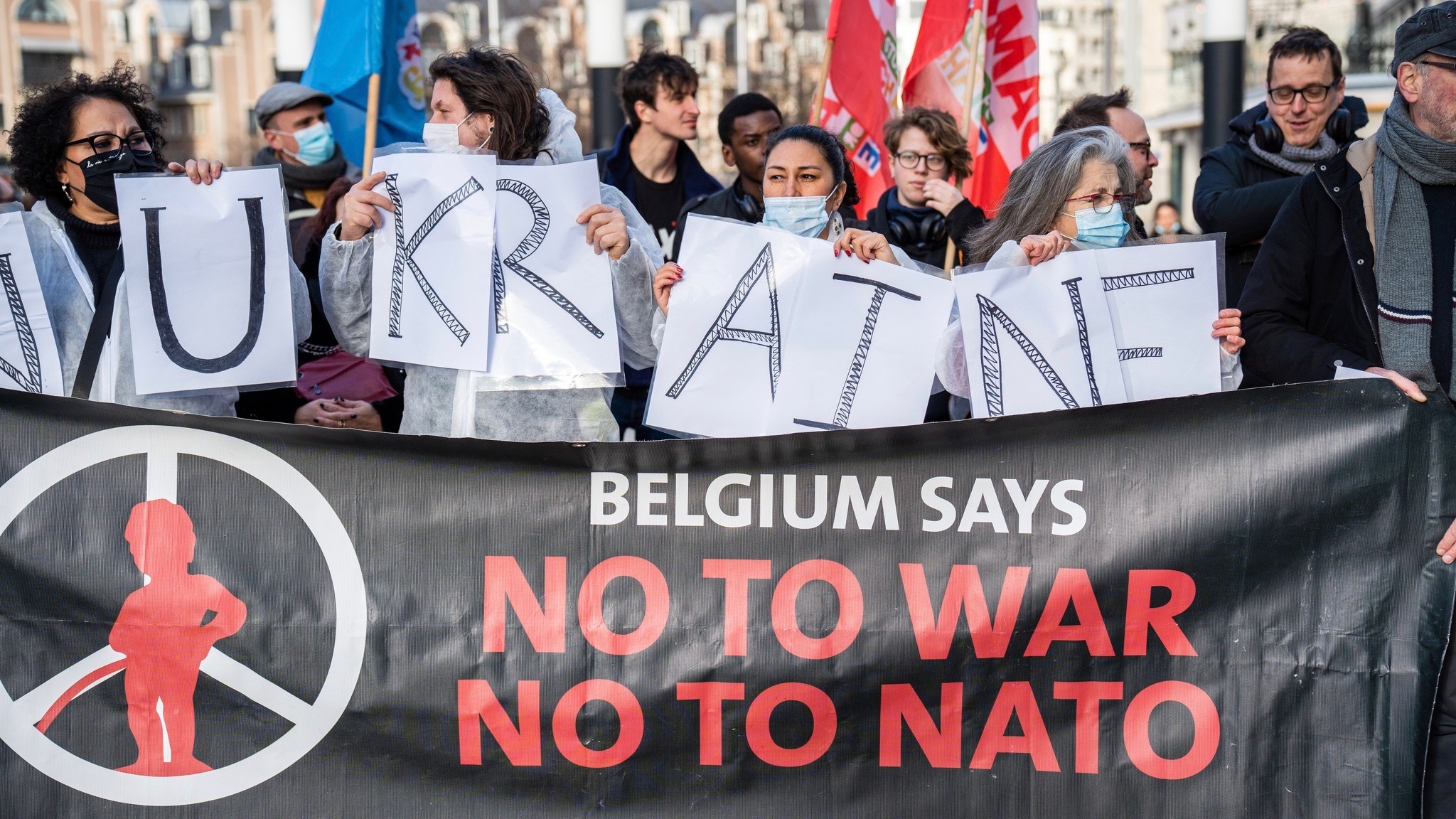 Mobilization in Brussels on February 5. (Photo: via Intal Globalize Solidarity)

On Saturday, February 5, peace groups and anti-imperialist sections in Belgium organized a demonstration in capital Brussels to protest the government’s plans to increase its defense budget amid the simmering Russia-Ukraine conflict. The demonstration was attended by members of left parties and progressive organizations such as Intal Globalize Solidarity, Vrede vzw, Cnapd Asbl, the Workers Party of Belgium (PTB/PVDA), the Comac youth movement, among others. They urged Russia and Ukraine to engage in dialogue to peacefully resolve the conflict.

The coalition government in Belgium has agreed to allocate EUR 10.2 billion (USD 11.4 billion) in additional defense spending over the next eight years to procure helicopters, special forces aircrafts and other military equipment. Meanwhile, progressive sections in the country are outraged that the government is increasing defense spending to strengthen NATO’s agenda and goals in the region while common people are facing the brunt of higher energy bills amid the severe winters. The US and NATO have been trying to escalate tensions in the Russia-Ukraine conflict to advance their agenda for military expansion in Eastern Europe.

25 peace groups participated in Saturday’s protest with the collective demand of immediate negotiations for de-escalation and ending threats, troop concentration and arms shipments. They also demanded a ceasefire in Ukraine and the implementation of existing agreements, halting NATO’s expansion, and no further increase in the defense budget of Belgium. They have instead called for investing these resources in public health, education, social progress and climate action.

PTB/PVDA president Raoul Hedebouw, who was part of the demonstration in Brussels on Saturday, stated that “the government – which includes in particular the social democratic and ecologist parties – keeps saying that there is no money for our energy bills, while it has decided to spend more than 10 billion more on war material. We say enough!”

“On the other hand, we must invest in social needs, and make efforts to prioritize peace, dialogue and cooperation.” Or as the demonstrators sang: “No money for war, but to fight misery!” he added.

Intal Globalize Solidarity said, “we do not want an increase in military spending to pay for NATO wars. We say NO to military surrogacy at the borders of Europe. Due to tensions, energy prices will explode and we will leave thousands of Belgian families in the cold. The U.S. is fueling the fire and giving oxygen to the conflict by sending troops and providing financial assistance to Ukraine. We call on our political decision makers to choose the path of dialogue and peace!”