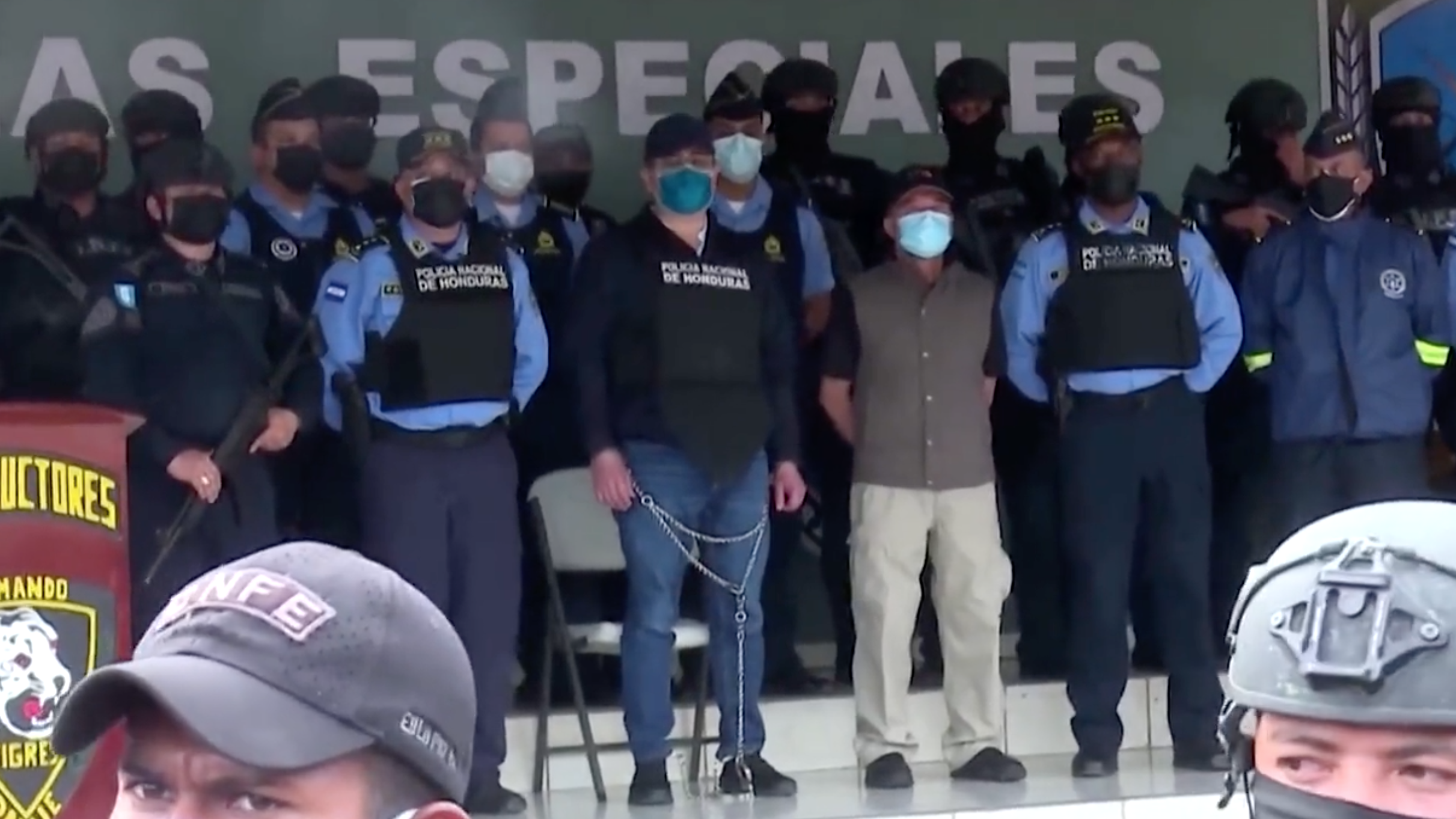 On Wednesday, February 16, former Honduran president Juan Orlando Hernández (JOH) appeared in court in Tegucigalpa for the first time in connection with the extradition request from the United States to face trial on drug-trafficking charges.

On Tuesday, Honduran national police arrested JOH from his residence in the capital Tegucigalpa. It came a day after the US government requested JOH’s extradition by the Honduran Supreme Court of Justice for allegedly conspiring to traffic drugs in the US. On Tuesday morning, Supreme Court judge Edwin Ortez formally accepted the extradition request and issued an arrest warrant for Hernández. Hours later, Hernández was handcuffed by officials and moved to a high-security detention center.

On February 14, the Honduran Foreign Ministry reported that it had sent an official request from the US Embassy to the Supreme Court, requesting the provisional arrest of an unnamed Honduran politician for the purpose of extradition to the United States. Hours later, Honduran media reported that security forces had surrounded the house of former president Hernández, awaiting the court’s order for his arrest.

Upon learning of the police presence outside JOH’s residence, hundreds of citizens, members of social organizations and political parties took to the streets and gathered in the locality, celebrating the measure against Hernández and demanding his capture.

Hernández, of the conservative National Party, was president from January 27, 2014, to January 27, 2022. His party was in power continuously from 2009 following the US-backed coup that overthrew the progressive president Manuel Zelaya. JOH ‘won’ a second term following the extremely controversial election in 2017 which was marked by widespread fraud. During his tenure, he was a close ally of the US and enjoyed its support for his neoliberal policies and also served as a key advocate of US interests in the region.

During the trial of his younger brother, Juan Antonio “Tony” Hernández, who was sentenced to life imprisonment in the United States for cocaine trafficking in March 2021, JOH’s name and those of his associates were mentioned numerous times. New York Prosecutor Jason Richmon alleged that Tony Hernández used his brother’s administrative connections to smuggle large amounts of cocaine into the US for years in exchange for bribes, while JOH provided protection. The prosecutor labeled JOH as a co-conspirator of the case.

The evidence surfaced during Tony’s trial indicates that JOH accepted around 1.5 million USD in bribes from drug traffickers, and used the money to finance his election campaigns.

On February 7, the US Secretary of State, Antony Blinken, declassified Hernández’s inclusion in the list of people accused of corruption or undermining democracy in El Salvador, Guatemala and Honduras. Blinken stated that Hernández was included in the said list on July 1, 2021, on the basis of credible journalistic information indicating JOH’s involvement in acts of corruption and drug trafficking. The same day, the US government revoked Hernández’s visa and prohibited him from entering the country.

Movements had indicted JOH long ago

While the US has only recently demanded JOH’s extradition, the people of Honduras have been denouncing the former president’s crimes for years now. In 2019, the same year that Tony Hernández was convicted of drug trafficking, massive protests took Honduras by storm. Masses of people were in the streets, demanding JOH’s resignation for crimes of drug trafficking. The slogan, “Fuera JOH narcodictador!!” (Get out JOH narco-dictator), rent the air. Similarly, the ousting of the narco-dictator was a key plank of the the campaign of Xiomara Castro who was elected president of Honduras in 2021.

In response to JOH’s arrest, The Civic Council of Popular and Indigenous Organizations of Honduras (COPINH), an Indigenous Lenca organization founded by Berta Cáceres, tweeted “The corporate banking mafia of #Honduras made up of #Atala and others have been the main beneficiaries and backers of #JuanOrlandoHernandez. We will not forget: the #Atala and #JOH are the most responsible for the murder of #BertaCáceres.” Bertha Zúñiga, daughter of Cáceres, posted on Facebook on the day of JOH’s arrest, “This is a national holiday! How this scumbag made us suffer!

The Honduran Secretary of Security, Ramón Sabillón, told local media that Hernández had been charged with four criminal offenses by a New York court, including drug trafficking, arms trafficking, illicit association with drug cartels, and corruption.

The spokesman for the Supreme Court, Melvin Duarte, stated that the Judicial Secretariat is open to receiving the documentation from Hernández’s defense, and that the procedure to hand over the former head of state to the US is in progress. The extradition process could take three months.

The newly inaugurated government of president Xiomara Castro seems prepared to hand over JOH for extradition. According to several Libre Party legislators, the Honduran justice system in its present state would not be able to carry out criminal proceedings against JOH, as the court system remains in the control of the former government’s allies.