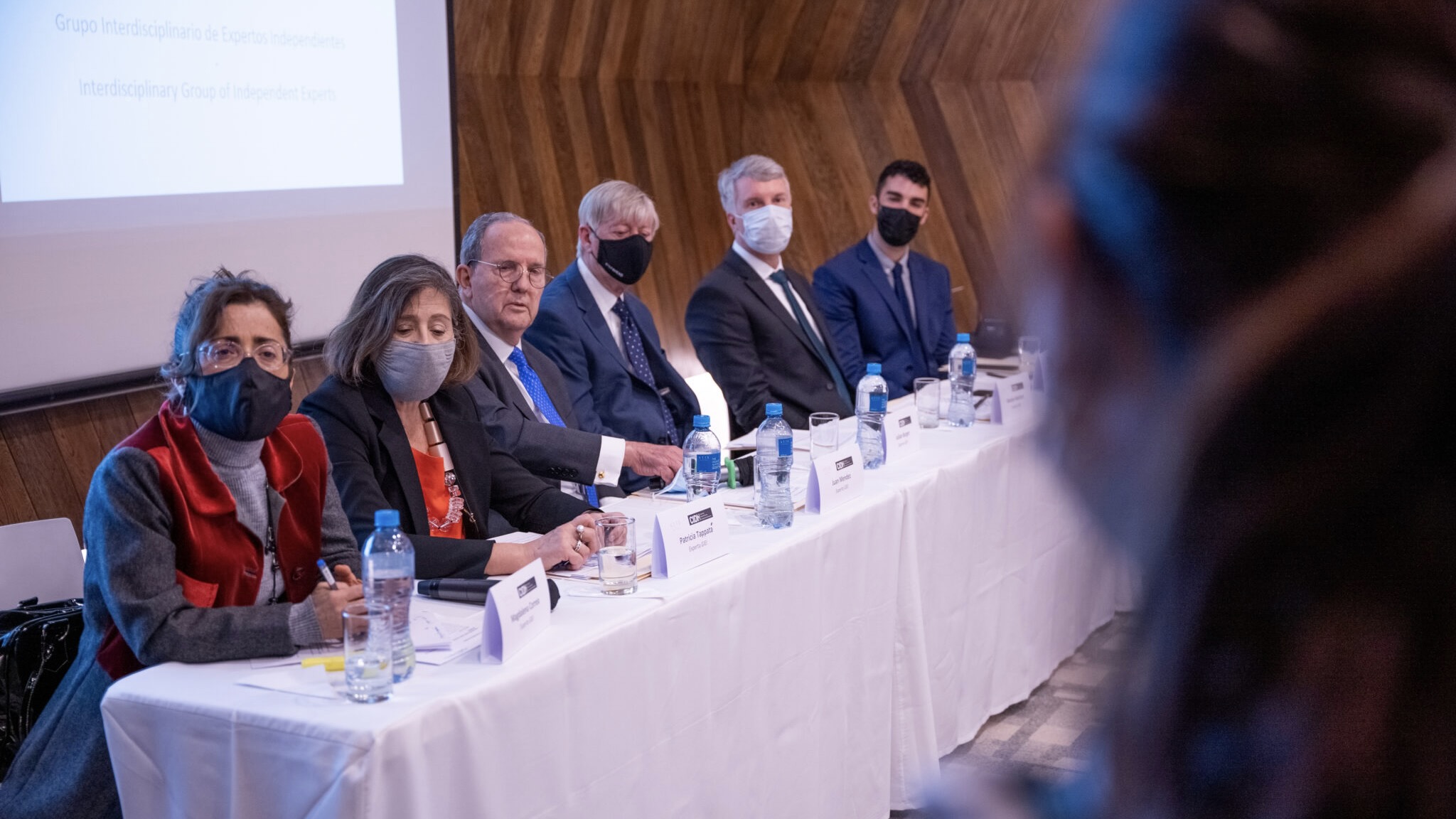 The GIEI presented the report for the first time in August 2021. Photo: GIEI

The Interdisciplinary Group of Independent Experts (GIEI), on March 2, presented to the Permanent Council of the Organization of American States (OAS) its final report on the acts of violence and human rights violations committed between September 1 and December 31, 2019, in Bolivia. The group of experts, sent to Bolivia by the Inter-American Commission on Human Rights (IACHR), confirmed that following the coup d’état against former president Evo Morales and during the interim government led by far-right de-facto president Jeanine Áñez, a series of  serious human rights violations were committed.

The report established that at least 11 rights were violated during the last quarter of 2019, including the right to life; right to personal integrity; right to freedom and personal security; right to honor, dignity and privacy; right to judicial guarantees and due process; right to freedom of expression; right of assembly and freedom of association; right of every woman to a life free of violence; right to access healthcare; among others. It also pointed out the discrimination faced by Indigenous people, the attacks against their property and the denial of their right to work under the coup-installed regime.

The report, which was first made public in August 2021, confirmed the occurrence of two massacres by security forces, recurring use of torture, political persecution, illegal detention and summary executions of those who took to the streets in rejection of the coup and in support of the democratically elected socialist president Morales. It reiterated that “in the context of a political conflict surrounded by violence, at least 37 people lost their lives in various parts of the country and hundreds received serious injuries, both physical and psychological.”

The 470-page-long report extensively referred to the breakdown of constitutional order in the country and the misuse of state’s institutions for political purposes, such as the security forces and the judiciary. It mentioned that the Supreme Decree 4078 passed by Áñez, which exempted the police and military officials participating in repression operations from criminal responsibility,  paved the way to state violence.

Marlon Weichert, a member of the GIEI, stated that “the police and the armed forces, in separate actions or in joint operations, frequently used excessive and disproportionate force; likewise, they failed to prevent acts of violence practiced by groups of civilians.” Weichert pointed out that during that period justice was used “for political persecution, and both the Public Ministry and the Judiciary became actors of investigations without due diligence, of criminal persecution without due process.” Regarding the censorship of independent media, Weichert said that various journalists were “intensely harassed and injured.”

The report did not address whether or not there was electoral fraud or a coup d’état, however, it did acknowledge the pressure and threats suffered by Morales and other government officials and the irregularities in Áñez’s inauguration/self-proclamation.

The GIEI made at least 60 recommendations regarding criminal investigation processes and reparations for damages to victims. The group called on the government to ensure that “there be justice,” and that the facts be investigated “in a serious, effective, exhaustive and diligent manner with full respect for the due process of the rights of the victims and of the accused or prosecuted persons in the trial.”

In this regard, Magdalena Correa, another member of the GIEI, proposed to prioritize the investigation of cases related to sexual violence and gender-based crimes, with a diligent and sensitive approach based on the conditions of the victims.

Meanwhile, for his part, Julián Burger, another member, recommended speeding up the investigation into the Sacaba and Senkata massacres and bring those responsible to justice. Burger, along with Patricia Tappatá, thanked the national government, president Luis Arce and his ministers for the support provided during the GIEI’s investigation.

Bolivia’s ambassador to the OAS, Héctor Arce, also expressed the country’s gratitude to the expert group for the report on the acts of violence that occurred in Bolivia in 2019. “This 479-page final report constitutes one of the documents with the greatest international legal contribution in the field of human rights for the restoration of memory, truth and justice in Bolivia,” said Arce.

He announced that Bolivia would sign an agreement with the IACHR to establish a monitoring table for the follow-up of the GIEI’s recommendations. “We hope that this experience will also serve other countries so that constitutional order is never interrupted in a country again. There are many legal and political responsibilities that will be addressed in the future,” he added.

After the presentation of the report, Argentina and Mexico criticized the role of the OAS and its secretary general, Luis Almagro, in promoting destabilization in Bolivia and supporting the falsified allegations of electoral fraud in the October 2019 general elections, which were used as a pretext by the right-wing sectors to begin violent mobilizations demanding Morales’ resignation, eventually ousting him.

Mexican ambassador to the OAS, Luz Elena Baños Rivas, said that the “political instrumentalization” of the OAS electoral observation mission in Bolivia in 2019 “facilitated the coup.” Baños stressed that “it is necessary to rescue the memory, truth and justice of what happened in that country (Bolivia) and ensure that it is never repeated anywhere else in the hemisphere. The matter is open until the role of the OAS is clarified in an action that sets an unacceptable precedent for our countries and constitutes a serious precedent of interventionism in a political action format that can be applied in any of our countries if it is endorsed in the OAS, it is doubly serious and undermines the prestige of the organization.”

Likewise, Argentine ambassador to the OAS, Carlos Alberto Raimundi, said that “the OAS has a deep responsibility in having created the conditions and the social and political climate for that coup d’état.” Raimundi also emphasized that this role of the hemispheric organization “is not a closed case” and that “it would help a lot to recover the legitimacy of this organization if it recognizes the historical responsibility that the leadership of this organization had when it endorsed certain positions of the electoral observation to create the conditions for that coup d’état”.