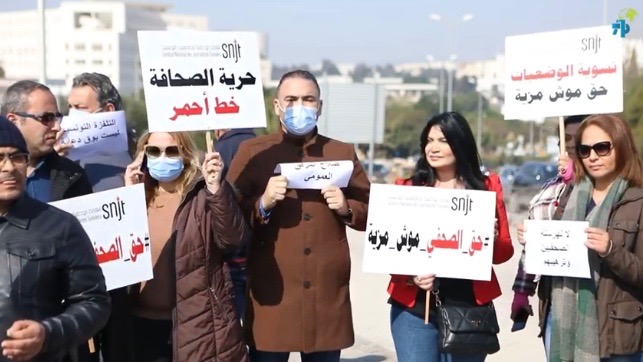 Journalists in Tunisia are set to go on a mass general strike to protest the increasing authoritarian and restrictive measures introduced by the current regime headed by president Kais Saied, multiple news reports stated on Tuesday, March 15. Quoting the National Syndicate of Tunisian Journalists (SNJT), news reports said that the date for the general strike is not yet finalized but it will be observed by journalists from both private and state-owned media. The strike is also aimed at putting pressure on the government to implement the long-delayed media reforms, especially in state-owned institutions.

SNJT vice-president Amira Mohammed was quoted in news reports saying that the decision was taken in coordination with the General Federation of Information during meetings held at the headquarters of Tunisian Television. She added that the strike is being held to denounce the “government’s incapacity to interact seriously with media stakeholders” and that the government has no will to find solutions to public media’s problems in view of facilitating its own control. According to her, despite the renewed collective strike action, the SNJT is open to reasonable negotiations that lead to “concrete results.” At the same time, she warned that “we will not allow tailored reforms,” which journalists fear the government will try to introduce to weaken the independence of the media and to increase the level of government control. She highlighted the fact that she had already suggested a number of reforms in the media sector for the government to implement, which have been ignored.

Tunisian journalists have regularly organized protests against the government and its intentions to expand state control over the media, especially since July last year when president Saied assumed all legislative and executive powers in the country and dismissed the government in a series of extraordinary measures that many have described as a ‘presidential coup.’ Last week on Friday, several journalists, technicians, photojournalists and television staff staged a protest in front of the state television headquarters against the ongoing government crackdown on the media and to demand urgently needed press reforms.

Protests against the president’s extraordinary measures to grab power last year and the subsequent steps taken by him to cement his hold on authority have been growing. On Sunday, demonstrations were organized by the Free Constitutional Party. More than 2,000 demonstrators raised banners and chanted slogans against the president and the current interim government appointed by him and demanded that national elections be held as soon as possible. Citizens continue to face widespread economic hardship, including shortages of food items and other essential commodities. The government also has to deal with massive international debt and try to balance its budget to avoid default. In this regard, it has been holding talks with the International Monetary Fund and other prospective international donors.