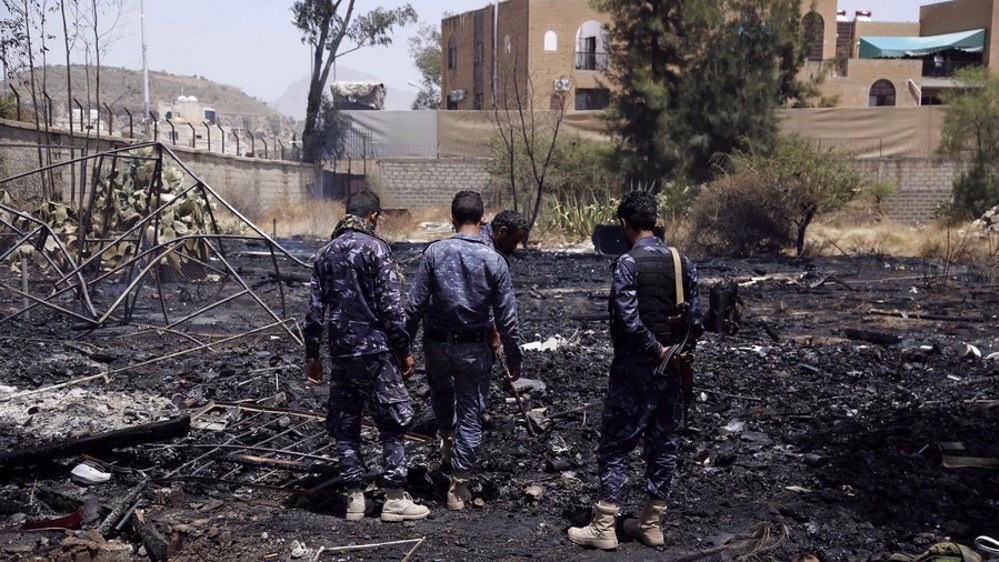 Yemeni security forces inspect the site of airstrikes that killed at least eight people and injured several others in Sana’a, Yemen, on March 26, 2022. (Photo: Xinhua)

Turki al-Maliki, spokesperson of the Saudi-led coalition forces involved in the seven-year-long ongoing war in Yemen, announced on Tuesday, March 29, that the joint forces command of the coalition will cease its military operations in Yemen beginning at [6:00 AM] Wednesday, March 30.

He announced that the decision was taken on the request made by the Gulf Cooperation Council (GCC) secretariat “with the view of creating propitious conditions needed for successful consultations and favorable environment” to “make peace, and achieve security and stability in Yemen.” However, a top Houthi leader termed in meaningless considering the siege of Yemen. “The Yemen blockade is considered a military action because it was imposed by force of arms. If the siege is not lifted, the coalition’s announcement of the cessation of military operations will be meaningless,” Mohammed al-Bukhaiti, a member of Ansarullah’s political bureau, tweeted, according to Press TV.

The Saudi-led coalition’s ceasefire came in response to the announcement of a voluntary and unilateral ceasefire for three days made by the Houthi-led government in Yemen on Saturday, March 26, when it commemorated a National Day of Steadfastness.

The Saudi-led coalition of over a dozen countries started its offensive against the Houthi-led forces to restore president-in-exile Abdrabbuh Mansur Hadi back to power. Hadi first fled to the southern Yemeni city of Aden and then left the country after the fall of capital Sanaa to the hands of the Houthi-led forces in 2015.

Yemen’s Supreme Political Council had announced on the occasion of Ramadan that it will unilaterally cease attacks on Saudi Arabia and its allies for three days. Announcing the decision, Mehdi al-Mashat, who heads the council, said that the ceasefire can be permanent if the Saudi-led coalition stops its attack in Yemen, withdraws its forces, and lifts the air, sea and land blockades imposed on the country since 2015.

The Houthi forces have clarified that their offer of ceasefire has nothing to do with the so-called ‘Riyadh consultations.’ The GCC-sponsored “intra-Yemeni consultation” began in Riyadh on March 29 to chalk out a “clear roadmap that ends the war.”

The Houthis have refused to join the talks. Mashat claimed in a TV interview on Tuesday that the offer of ceasefire came in the “context of ensuring the legitimate rights of the Yemeni people.” He claimed that Sanaa is always ready for “dialogue in a neutral country and what is being arranged in Riyadh” is “a gathering of ranks of the aggression coalition” and not a peace consultation, Yemen news agency Saba reported.

Hopes of a permanent ceasefire

The announcement of the ceasefire by both the parties of the war in Yemen was welcomed by the UN and other countries in the region. Spokesperson of UN secretary general Antonio Guterres in a statement on Wednesday expressed hope that this cessation would create momentum to achieve permanent peace in Yemen and the end the violence. According to the UN, over 400,000 Yemenis have been killed in the war which has caused the “worst humanitarian crisis of the century.”

Iran welcomed the Houthi movement’s unilateral announcement of ceasefire. Foreign ministry spokesperson Saeed Khatibzadeh said in a statement on Tuesday that the Houthi ceasefire plan was presented in “good faith” and shows Yemen’s “strong will to end the war, lift the oppressive siege against the people and resolve the political crisis.”

Hoping it will lead to the end of “genocide” in Yemen, Seyed Mohammad Marandi, a professor at Tehran University, said that the ceasefire was a result of realization by the Saudi-led coalition that they are not immune to Houthi retaliation.

Now that the #Yemeni government and #ansarallah have shown the #Saudi regime that they can destroy key oil installations and that the US is incapable of stopping their drones and missiles, there is a glimmer of hope that MbS & his western allies will end the genocide. https://t.co/wIe0exipd5

Despite the coalition’s consistent air strikes and ground offensive, Houthi-led forces have not only been able to take control of the majority of the populated areas in Yemen, but have also managed to attack deep inside Saudi Arabia and the UAE through drones, disrupting their oil production. Last week, it attacked an Aramco oil refinery in Jeddah.

This is the second such major announcement of ceasefire in Yemen since the beginning of war. In April 2020, both the parties had agreed to a two-week ceasefire. However, earlier attempts of making the ceasefire permanent failed due to Saudi Arabia’s refusal to lift the blockade, a key demand of the Houthis.