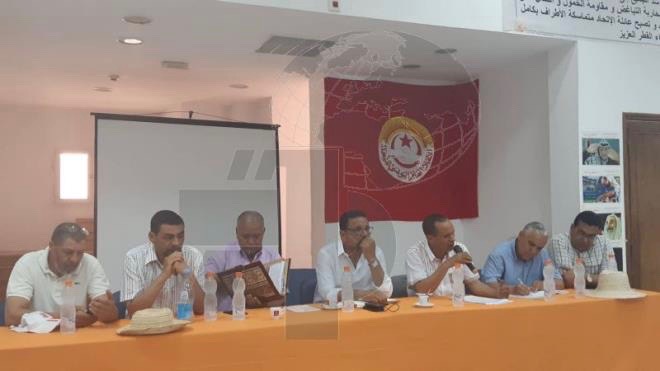 In a statement, the UGTT National Administrative Board demanded that the government led by President Kais Saied withdraw its circular number 20 issued on December 9 which restricts negotiations between the government and the trade unions.

The UGTT has over one million members. According to its statement, employees of all 159 public sector firms will participate in the strike on June 16.

The union has demanded the rollback of the proposal to cut back public spending, including a freeze on the wages of public sector employees and further privatization. It also demanded that the state take effective measures to control price rise and abolish the 1% solidarity contribution in government funds made from employees’ salaries.

The UGTT has been demanding wage increases for some time now, claiming that the current wages are not adequate to cover the rise in prices of essential commodities that is affecting the workers’ purchasing power.

The Tunisian government led by President Saied has been trying to negotiate with the International Monetary Fund (IMF) for a USD 4 billion loan in order to face the growing financial concerns of the country.

Tunisia now has a 100% debt-to-GDP ratio. Slow recovery from the slump during the COVID-19 pandemic has put an additional burden on the country’s fiscal situation.

The IMF has refused to proceed with the fourth such grant of loans to Tunisia since 2011 until the government takes measures to reduce subsidies on food and energy and freezes the wages of public sector employees.

The UGTT announced in May that it will oppose any unilateral move by the government to impose economic hardships on people at a time when most of them are already suffering due to the high price rise and lack of employment.

The UGTT had earlier also announced its boycott of the national dialogue initiated by the Saied government to frame a new constitution for the country by July 25. The government is planning to conduct a national referendum on the proposed constitution.

#Tunisia: @UGTT_TN on Monday announced its refusal to participate in the national dialogue according to the formula set out in the presidential decree on the creation of the national advisory committee for the new Republic, saying it was not the result of prior agreement. #TAP_En pic.twitter.com/jisiZ7he8b

In July last year, President Saied dismissed the country’s elected government and dissolved the parliament alleging that politicians had indulged in corruption and were responsible for the country’s financial problems.

Tunisia’s political parties have termed Saied’s takeover as a coup and have been conducting public protests against it for the last one year. Some of them, including the Tunisian Workers’ Party, have announced that they will not participate in the proposed national referendum.