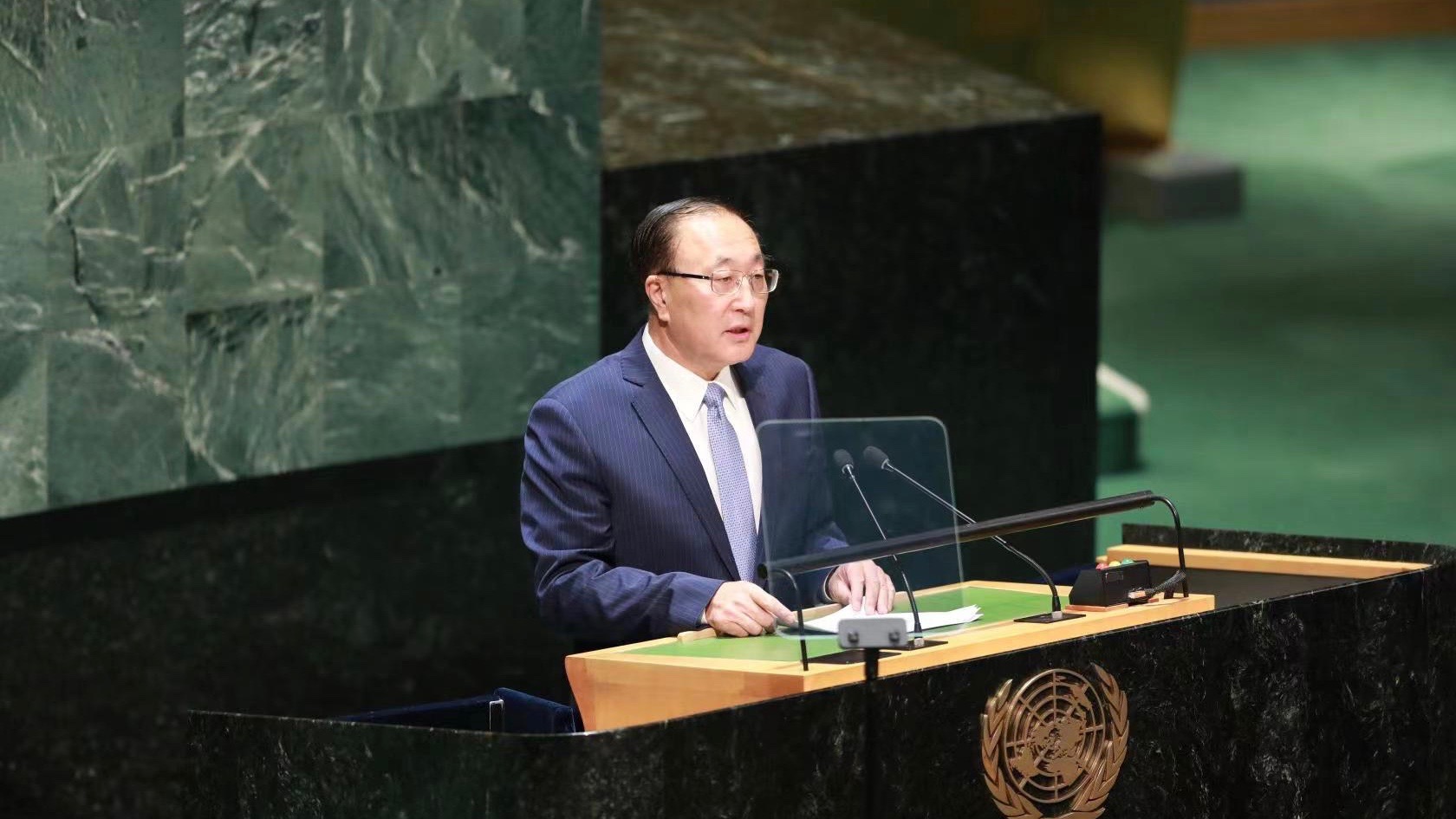 The Chinese ambassador to the UN speaks at the UN General Assembly on June 8, defending China’s veto of the US-drafted resolution to put further sanctions on North Korea. (Photo: Permanent Mission of the People's Republic of China)

China and Russia criticized the United States at a special meeting of the United Nations General Assembly (UNGA) for stoking tensions in the Korean peninsula on Wednesday, June 8. Tensions have recently escalated with competitive missile tests by the two Koreas.

The session was the first of its kind as it was based on a recent resolution that a requires explanation by permanent members of the UN Security Council (UNSC) for using their veto power. China and Russia were called in the first such meeting to explain their vetoes last month on a US-drafted UNSC resolution to impose further sanctions on North Korea for its missile tests.

The UNSC vote, held on May 27, was the first time since 2007 that the body was split on sanctioning North Korea. Ever since the Democratic People’s Republic of Korea (DPRK) conducted its first nuclear test in 2006, the UNSC has imposed a total of 10 sanctions that were widely criticized for failing to establish deterrence of any kind.

China’s ambassador to the UN, Zhang Jun, told the UNGA that the current state of tensions in the peninsula is largely due to the “flip flop” by the US towards the peace process in the peninsula.

“It must be pointed out that the Peninsula situation has developed to what it is today, primarily due to the flip flop of US policies, its failure to uphold the results of previous dialogue, and its disregard for the reasonable concerns of the DPRK,” Zhang told the UNGA.

“Since the DPRK took denuclearization measures in 2018, the US side has not reciprocated the DPRK’s positive initiatives…nor has it demonstrated the necessary sincerity for resolving the issue,” he added.

Russia’s deputy ambassador to the UN, Anna Evstigneeva, also echoed the same views at the UNGA meeting, pointing out the damage that such sanctions have done to the country. Evstigneeva also reportedly said that North Korea needs more humanitarian aid and that the West should stop solely blaming it for the tensions.

The strong criticism of the US’ role comes at a time when inter-Korean relations have taken a nosedive ever since the conservative President Yoon Suk-yeol took office in South Korea on May 10, succeeding Moon Jae-in who had advocated for inter-Korean peace and reconciliation.

Even before his election as President, Yoon had consistently called for a hostile stance against North Korea and rejected the reconciliatory policies of his predecessor. Since May 10, North Korea has conducted three missile tests that were met with a similar response from South Korea in a sharp departure from the five-year hiatus on missile launches under Moon.

The US also joined in these competitive missile tests, firing its own missiles in the last two such incidents. The missile launches are a show of strength and never conducted on any targets on either side. But the launches have often indicated deteriorating relations between the two governments and threaten to undo any progress made during the peace process.

The US also contributed to the escalating tensions by calling on more UN-mandated sanctions. It recently made the unsubstantiated claim of another possible nuclear test by the North. The DPRK’s representative responded to the allegations made by the US saying that the UN Charter “clearly stipulates that every state has inherent rights of individual or collective self-defense.”

“The measures that the DPRK is taking for bolstering national defense capabilities are an inevitable choice to cope with the hostile threats of the US within the scope of self-defense rights,” added Kim Song, the DPRK’s ambassador to the UN.

The North Korean government has defended its nuclear tests as part of building its defense capabilities against the US and has long argued that the latter’s extensive military presence in the peninsula and the region poses an existential threat to it.

This was also echoed in China’s statement which also pointed out recent US maneuvers in the Asia-Pacific. “The US has been vigorously implementing its Indo-Pacific strategy, and strengthening military alliances with relevant regional countries, which aggravates the risks of a military confrontation in the region,” Zhang stated.

Hitting back at the US attempt to cast doubt on China and Russia’s commitment to denuclearization, Wu Jianjian, part of the Chinese mission to the UN, argued that “continuing to increase the sanctions against DPRK would only make the likelihood of a political solution even more remote.”