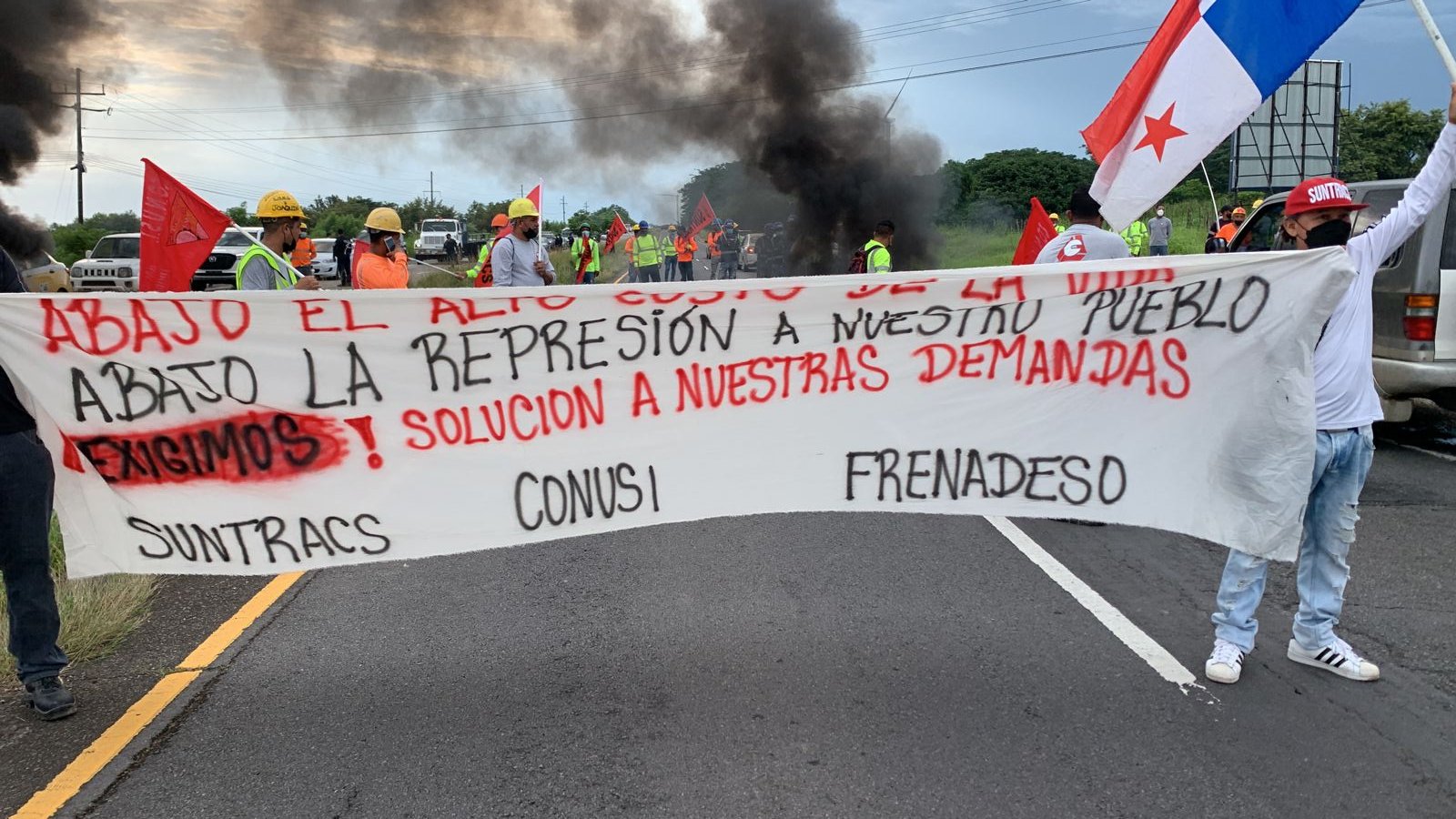 Workers participate in a road blockade to demand the government take immediate measures to address their demands. Photo: SUNTRACS

The people of Panama continue protests against the high cost of living and to demand government action to resolve the growing economic crisis. The protests began on July 1 to mark three years since the beginning of the government of right-wing president Laurentino Cortizo. Since then, workers, fisherfolk, students, educators, and civilians have braved heavy police repression, staging blockades of key roads and marching in major cities to make their demands to the government heard.

The mobilizations are organized by social movements and trade unions from across diverse sectors of Panamanian society that came together in the People United for Life Alliance including the National Front for the Defense of Economic and Social Rights (FRENADESO) and the Single Union of Construction Workers (SUNTRACS). During a meeting in May, the Alliance created a list of 32 demands “in light of the grave economic, political, and social situation the country is suffering under and the lack of response and attention of the authorities.”

“We want to send a clear message to the government that we are willing to fight for a better quality of life, for a better salary, down with the high fuel costs! Without struggle, there can be no victories”

The demands include freezing the price of fuel and basic commodities, a general increase in salaries and pensions, freezing the price of medicine and resolving the lack of supply, measures to combat corruption, repairing schools, roads, and public infrastructure, rejecting the four bilateral US-Panama military bases, policies to support the Indigenous communities and ensure the respect of their autonomy, among others.

In their letter to the national government, they highlighted that in response to the crisis that was made worse by the COVID-19 pandemic, there is consensus amongst international bodies such as the ILO and the UN, that governments should take measures that protect the rights of people and broaden the social safety net for the most vulnerable. However, they state, Panama has taken the opposite approach and has continued to be oriented towards the “recovery only of the rate of profit and the protection of capital”.

The Alliance had attempted to raise the list of demands to the national government on several occasions, but had been summarily told that the government could not address any of them. The closure of the doors of dialogue led the Alliance to call for national mobilizations beginning on July 1.

In a statement released by FRENADESO, they highlighted that the protests take place “amid a social crisis, provoked by neoliberal policies that got worse during the pandemic, such as the price of food, medicine, fuel, the increase in unemployment and informal employment, debt, corruption among other things.” They emphasize that “the Panamanian people have taken to the streets to demand effective solutions for the collective good…while the government of Cortizo continues to put the country in further debt, making Panama, according to Bloomberg, one of the most indebted of the continent.”

FRENADESO further denounced the arbitrary detentions of several leaders during the protests such as Ariel Rodríguez, a union leader from SUNTRACS, who on July 1 was arrested and put in jail in Chiriquí. Rodríguez was released later that day following protests and social media campaigns demanding the same.

Leaders from the Alliance will meet in the Meeting of Leaders on July 6 in Panama City to discuss their list of demands and the response of the government so far.