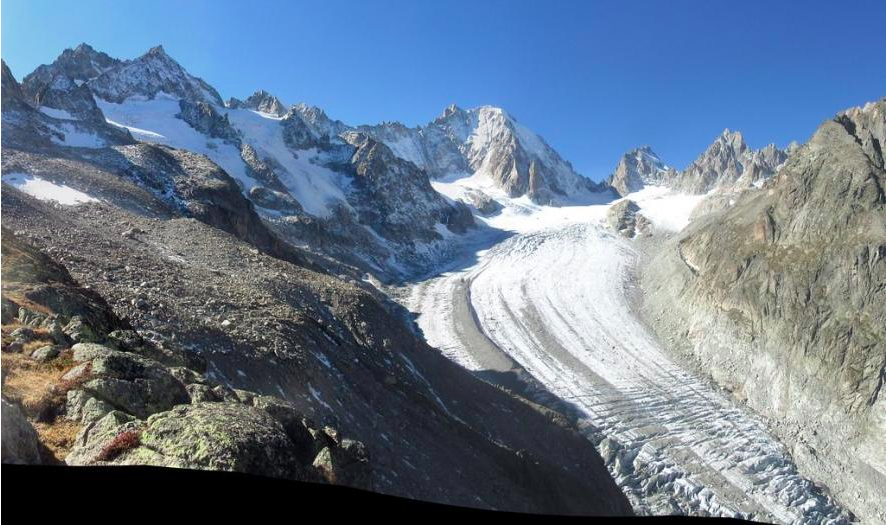 Within a period of 85 years, from 1931 to 2006, the volume of glaciers of Switzerland has come down by half. Research published in the journal The Cryosphere on August 22 reported the development. Researchers from ETH Zurich and the Swiss Federal Institute of Forest, Snow and Landscape Research WSL teamed up and produced a scientific analysis of the historical perspective on Swiss glaciers with the help of advanced techniques.

Rapid melting of glaciers as a consequence of man-made climate change has been monitored by scientists and researchers quite intensely. However, the glacial melting monitoring systems have seen the improvement for precise analysis only since 2000s, especially in assessing the changes in volume. Not much is known about glacial melting during the 20th century. Of course, there have been efforts made to reconstruct the topography of the glacial surface during 19th and 20th centuries, but these have shown large discrepancies with analyses made out of climate models, especially while assessing glacial volumes.

In the new study, the researchers attempted to reconstruct the topography of the Swiss glaciers in 1931. This reconstructed data is then compared with the data from the 2000s. With this comparison, the researchers concluded that the glacial volume has shrunk by half during 1931-2016.

For the reconstruction of the glacial topographies, the researchers resorted to a sophisticated technique known as stereophotogrammetry. This technique is generally used in determining the nature, shape and position of objects based on comparison between image pairs. The researchers used material from the terrestrial image archive called TerrA, which stores around 86% of Switzerland’s glacial areas. They analyzed about 21,700 images taken between 1916 and 1947.

Erik Schytt Mannerfelt, the lead author of the study, said in a statement, “Based on these photos, we determined the glacier surface topography. If we know the surface topography of a glacier at two different points in time, we can calculate the difference in ice volume.”

The study authors presented side by side pairs of pictures depicting the same spots. The pictures are nearly a century apart. This comparison revealed that the Swiss glaciers have changed dramatically. As an example, the authors compared the status of the Fiescher Glacier that showed a massive ice sea in the year 1928, which in 2021 had a few spans of white snow. The study took the year 1931 as the reference and the researchers reconstructed the surface topography of the glaciers in that year.

Interestingly, the researchers found that the glaciers did not continuously recede in the century; in fact, there had been massive growth of the glaciers during 1920s and 1980s. However, despite the sporadic growth of snow expanses, the big picture revealed a grim situation of massive glacial loss, said Daniel Farinotti, co-author of the study and professor of glaciology at ETH Zurich and WSL.

“Glacier retreat is accelerating. Closely observing this phenomenon and quantifying its historical dimensions is important because it allows us to infer the glaciers’ responses to a changing climate. This information is needed to develop reliable scenarios for future glacier changes,” Farinotti further said in a statement.

While the study revealed a retreat of glaciers in the period 1931-2016, data from the glacier system GLAMOS, managed by ETH Zurich, shows that the Swiss glaciers have witnessed a further 12% depletion during the period 2016-2021, which is just six years.