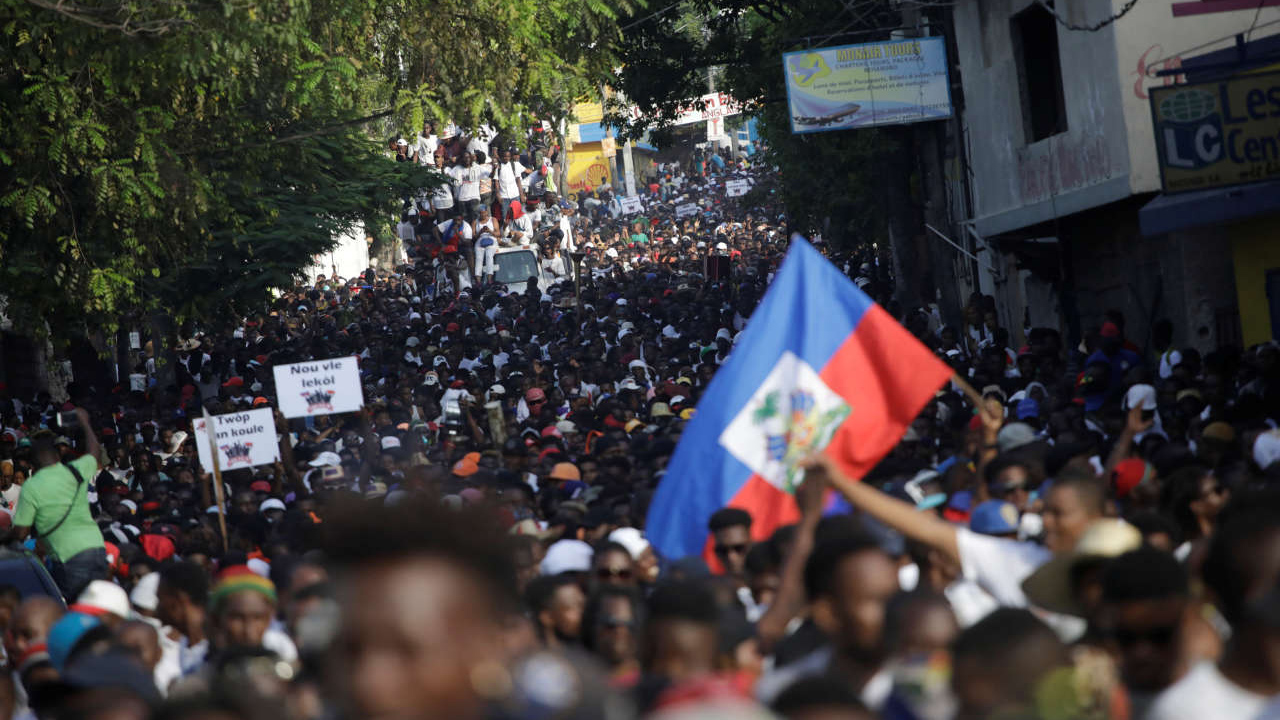 On Monday October 17, under the banner of “Occupation is Over, Long Live Our New Independence,” hundreds of thousands of Haitians flooded the streets across the country, demanding the unequivocal resignation of de-facto President Ariel Henry and rejecting his treasonous request for international military assistance to fight criminal gangs. Citizens organized massive demonstrations, marches and roadblocks in all ten departments of the country against Henry’s decision, claiming that it would pave the way for another foreign military occupation of the country.

In the capital Port-au-Prince, thousands gathered at the Champs-de-Mars public square and marched to the US embassy to demand an end to the US imperialist intervention in Haiti. However, before reaching the embassy, police repressed protesters using tear gas. Only over a hundred people managed to reach the embassy. Those who did arrive at the embassy raised slogans demanding that the US government, the UN and the international community as a whole respect the right to self-determination of the Haitian people and revoke their support for Henry’s illegitimate government.

In cities such as Les Cayes, Jacmel, Cap-Haïtien, Jérémie and Gonaïves, thousands of people demonstrated, denouncing the Henry administration for requesting foreign military support, despite knowing that previous military interventions did not fix the country’s problems. Security forces violently repressed the peaceful protests in all of these cities.

The massive nationwide mobilizations coincided with the 216th anniversary of assassination of Jean-Jacques Dessalines, the leader of the Haitian Slave Revolution against French colonial rule (1791-1804) and considered “Father of the Nation” by the Haitian people. Every year, Haitians mobilize on this day in commemoration of his life and revolutionary contributions to the country. This October 17, Haitians vowed to continue struggling against any new foreign invasion and live up to his legacy.

“The population has sworn to keep struggling and not let foreign soldiers contaminate Dessalines’ land,” he added.

As the protests were taking place, the UN Secretary-General António Guterres at the UN Security Council on Monday once again called for “armed action” in Haiti, warning that residents face a “nightmarish” situation.

“I believe that we need to not only strengthen the Haitian police, with training, equipment, and other measures, but that in the present circumstances, we need an armed action to release the port and allow a humanitarian corridor to be established,” he added.

For the past two weeks, gangs have blockaded the Varreux terminal in Port-au-Prince, which has led to critical shortages of fuel and water and has complicated efforts to respond to a dangerous outbreak of cholera.

On October 5, in an address to the nation, Henry expressed his intention to request the help of the international community to deal with the humanitarian crisis caused by gangs. On October 9, Henry, through an official letter to the UN Secretary General, asked the UN to intervene militarily in the country. On October 10, Guterres urged the international community to consider deploying forces to Haiti to address growing humanitarian and security crises in the country.

On October 12, a delegation of the US government visited the country to evaluate Henry’s request. The same day, US Secretary of State Antony Blinken announced that the US imposed visa sanctions against gang leaders in Haiti.

This Monday, the UN Security Council met to discuss the US and Mexican governments’ proposals for the deployment of a non-UN multinational force in Haiti, and the imposition of targeted sanctions on gang leaders like Jimmy Chérizier, a former police officer known as “Barbecue,” who leads a gang alliance called G9 and Family.

During the session, representatives of some governments such as China supported imposing sanctions against gang members and their supporters, but disapproved of the deployment of an international armed force in the country. The UNSC is scheduled to vote on the resolutions on Friday, October 21.

China is correct. Targeted sanctions (travel ban, assets freezes and arms embargo) against #Haiti's criminal oligarchs that arm and finance gangs to maintain their economic grip is exactly what the UN needs to do. https://t.co/EdhIHzYH6q

“They created the mess so that they could present themselves as rescuers, as saviors,” he added.

According to Bien-Aimé, “the Haitian people will not allow the deployment of foreign troops on national soil.” He added: “What Haiti needs as help from the international community is equipment for the national police, so that they can confront the gangs.

Canada and the US send military equipment to Haiti

Additionally, amid widespread rejection of international interference, on Saturday October 15, Canadian and United States military aircraft delivered “security equipment,” including tactical and armored vehicles and other supplies to Haiti.

In a joint statement, the Canadian and US government indicated the equipment was purchased by Haiti’s government, and was aimed at supporting the Caribbean country’s police to fight criminal gangs.

“This equipment will assist the Haitian National Police in their fight against criminal actors who are fomenting violence and disrupting the flow of critically-needed humanitarian assistance, hindering efforts to halt the spread of cholera,” read the statement.

According to reports from local media, on October 15, four armored vehicles were received in the capital Port-au-Prince, and by October 28, Haiti will received 18 more.

In recent weeks, gangs occupied two police substations and stole an armored car, without the police being able to confront them. The police had admitted on several occasions their inability to contain the armed groups due to lack of equipment and preparation.

Nevertheless, Haitians citizens and social organizations are skeptical about the use of military equipment as Henry has repeatedly criminalized the mass protests demanding his resignation, claiming that the protests are being led by gangs.

Since August 22, Haitians have been demonstrating against chronic gang violence, poverty, food insecurity, inflation and fuel shortages. The Haitian people have argued that the multidimensional crisis facing the country has deepened due to the mismanagement of the ruling far-right Haitian Tèt Kale Party (PHTK). They are demanding that Henry must leave power because he is incapable of stabilizing the country.