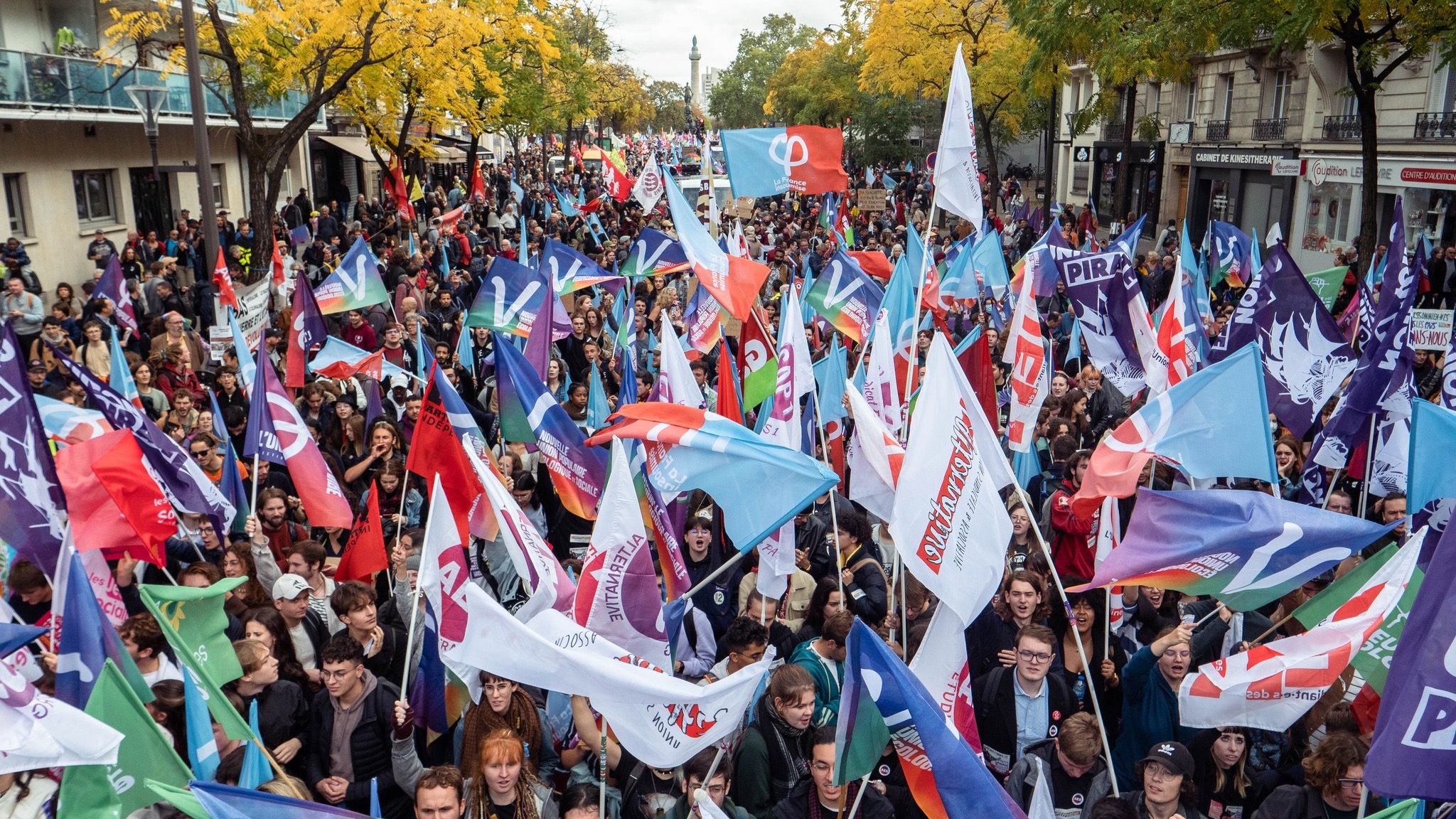 Mobilization in Paris. (Photo: via LFI)

Massive protests against the soaring cost of living crisis continue across Europe. Acute energy shortages and skyrocketing prices of fuel and basic commodities have pushed people to the brink, even as governments and energy companies resort to warmongering and profiteering from the crisis. With a harsh winter predicted, without adequate and affordable energy, broad sectors of society have started joining mobilizations demanding concrete measures to tackle the cost of living crisis.

Working class groups leading the mobilizations are demanding governments to increase wages and pensions and restore the purchasing power of people, along with placing caps on fuel and food prices to curb inflation. Progressive political parties are calling for taxes on the excess profits made by energy companies. In this line, many have underlined the importance of a peaceful solution to the Russia-Ukraine war to restore stability to the region.

On Sunday, October 16, over 100,000 people marched in Paris, France denouncing the Emmanuel Macron-led government’s failure to tackle the cost of living crisis and the climate crisis. Activists and leaders from the newly formed left-wing coalition New Ecological and Social People’s Union (NUPES), its constituents La France Insoumise (LFI) and the Communist Party of France (PCF), and trade unions like the General Confederation of Labor (CGT) participated in the march. LFI leader Jean-Luc Melenchon and the Nobel Laureate in literature (2022) Annie Ernaux also joined the march. Major trade unions in the country have called for a general strike on October 18 demanding an increase in wages and restoring the purchasing power of people affected by the crisis.

Following the mobilization, Melenchon, the leader of NUPES and LFI, stated, “With what we are doing today, with so many organizations calling for it, we are drawing the construction of a new Popular Front that will exercise power in this country when the time comes. And which, as always, will begin by taking care of the poor people, of those who suffer and cannot defend themselves. The freezing of prices, the increase of wages, the restoration of the wealth tax, a serious plan against climate inaction and the defense of pensions are the principles demanded by this new Popular Front.”

On Sunday, tens of thousands of people marched in Moldovan capital Chisinau protesting against soaring inflation and demanding the resignation of President Maia Sandhu and the government led by the pro-EU Party of Action and Solidarity (PAS). According to reports, police blocked several protesters from entering the Central Square in Chisinau and also demolished a large number of tents placed by the protesters. Opposition parties in the country including the Party of Communists of the Republic of Moldova (PCRM) condemned the police crackdown on protesters.

In its statement, PCRM said that Moldova under President Sandu and PAS is no longer a legal or democratic state. “The crackdown on peaceful protesters was the last straw that overflowed the cup of people’s patience, and popular anger. This regime, which daily makes people’s lives unbearable, engages in moral repression against dissidents, pushes the country to hunger, cold, devastation, war, must undoubtedly go.”

On Saturday, October 15, working class sections in Cyprus, under the leadership of the Pancyprian Federation of Labor (PEO), marched to the Ministry of Finance in Nicosia demanding concrete measures to fight inflation and the ongoing cost of living crisis. Members of the United Democratic Youth Organization (EDON) also joined the march. In its memorandum submitted to the government, PEO demanded a decent minimum wage with adequate rights, institutional measures to strengthen Collective Agreements, and immediate reduction in the VAT on fuel, electricity and other essentials.

The Progressive Party of Working People (AKEL) in Cyprus had earlier stated that “since the government is deaf to society’s request to relieve and support households and businesses from the energy crisis, since the government refused to implement parliament decisions in this direction, it is obvious that we need another government that can fix all the problems and implement the proposals, suggestions and decisions of AKEL and the opposition related to comprehensive planning on energy, electricity and fuel to be able to relieve households and business.”

On Saturday, progressive sections in Italy, including the Communist Refoundation Party (PRC) and We Don’t Pay Campaign, organized mobilizations in the cities of Rome, Bologna, Palermo, Ancona, and others, protesting the high cost of living, profiteering by the energy companies, and the ongoing imperialist wars.

On Friday, October 14,  cadres of the Workers Party of Belgium (PTB/PVDA) protested in front of the headquarters of the energy supplier group Engie in Brussels as part of the Fridays of Rage protests that the party has been organizing each week. They called on the government to tax the super-profits earned by the company during this crisis. Protest marches were also held on Friday in the cities of Charleroi and Gand.

People in the Austrian city of Graz hit the streets on Friday protesting the soaring inflation and demanding an increase in wages. Members of the Communist Party of Austria (KPO) and the Communist Youth of Austria (KJO) took part in the mobilization. The committee of the KPO in Graz stated, “the government is just watching as life becomes unbearable for more and more people. Government has no means against the horrendous heating and electricity costs. The two-time increase in benchmark rents has waved through the federal government, now a third increase could be on the way, due to which tenants would pay almost 18% more rent than last year.”