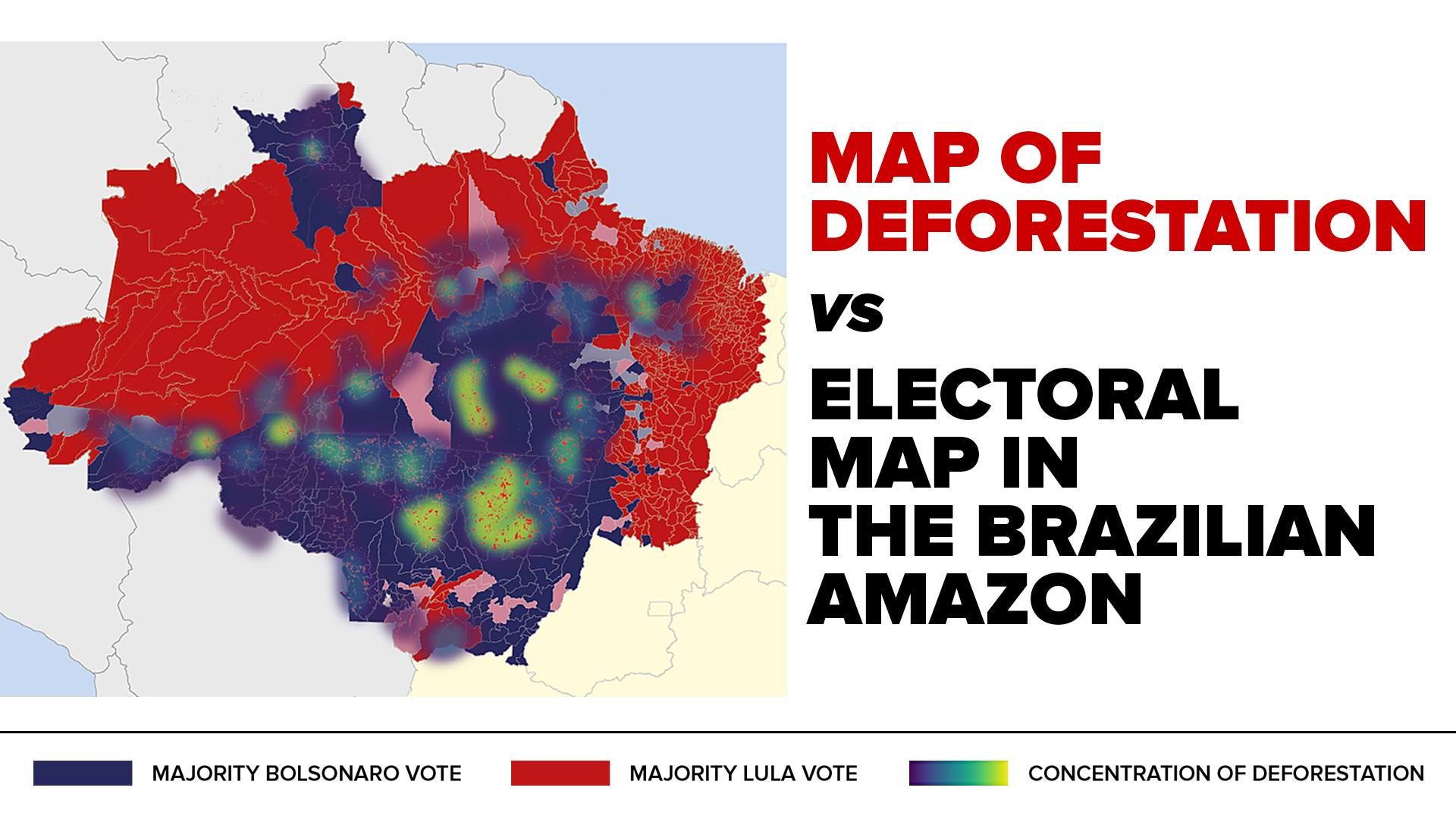 The support for environmental devastation has earned votes for president Jair Bolsonaro, who is running for re-election on the ticket of the Liberal Party (PL). These votes have appeared above all in the regions that have deforested the Amazon the most, including the so-called arc of deforestation, which runs from Acre to Maranhão. This is proven by a comparison between an electoral map of the first round of voting in 2022 and the points of greatest environmental pressure, elaborated by Brasil de Fato.

The crossing of the data takes into account the deforestation alerts accounted for by the “Deter” system of the National Institute for Space Research (Inpe) throughout the Bolsonaro government. These are municipalities where the economy is driven by illegal deforestation, land grabbing, and land invasion, with a predominance of cattle ranching, soybeans, and mining in protected areas.

The map was prepared by forest engineer Newton Monteiro, who is getting a Master’s degree in Geodetic Sciences at the Federal University of Paraná (UFPR), and is available in its original version here. The images show where there were deforestation alerts between 2019 and 2022 and the regions where these alerts cover larger areas, above 150 thousand km².

With 40 years of activity in the environmental area, the founding partner of the Socio-environmental Institute (ISA), Márcio Santilli, guarantees that the overlap between Bolsonarism and environmental crime is not by chance. According to him, those who commit environmental crimes profited more during the mandate of the current president and increased their investment in politicians who support the candidacy of Bolsonaro.

“There is no doubt that this predatory economy is considerably more capitalized than it was four years ago. We are talking about large enterprises that mobilize state-of-the-art equipment, in addition to political corruption schemes, of giving money to mayors, deputies, and senators who defend predation as an economic option,” Santilli points out.

The vote in the new areas of environmental devastation

One of the key areas is the region called Amacro (an acronym for Amazonas, Acre and Rondônia, since it covers parts of the three states), one of the new environmental pressure zones consolidated under the Bolsonaro government. 20% of deforestation in the Amazon between 2020 and 2021 took place in this region.

On the map, another pole of environmental devastation with prevalence of votes for Bolsonaro is in the state of Pará in the municipalities of Itaituba (57.7% of votes for Bolsonaro), Altamira (57.7%) and São Félix do Xingu (63%), which appear monthly among the most deforested in the country.

In the same region is the town of Novo Progresso of Pará wherein 79.6% of the valid votes went to Bolsonaro and was where the so-called “day of fire” in 2019, when ranchers purposely set fire to a large portion of the forest. Protected areas such as the Kayapó Indigenous Land and the Jamanxin National Forest are targets of continuous illegalities committed by loggers, gold miners, and cattle ranchers.

In Mato Grosso, all ten municipalities that lead the state deforestation ranking gave a majority of votes to Bolsonaro. In six of them the vote for Bolsonaro exceeded 70%: Colniza, Nova Bandeirantes, Aripuanã, Querência, Marcelândia and Juara.

In Roraima, cities that have experienced an explosion of environmental crimes elected Bolsonaro with more than 60% of the votes, among them Caroebe, Rorainópolis, and Caracaraí. The culprits are soy, logging, and cattle ranching. In the first year of Bolsonaro’s mandate, the loss of vegetation cover more than tripled in the state, according to data from Inpe.

For the ISA founder, the election result expresses majority support for Bolsonaro in the parts of the Amazon with the highest level of attacks on the environment. “It is not a hegemony that we can generalize for the entire Amazon. But [we see that] environmental crime finances electoral corruption,” he summarizes.

This article was written by Murilo Pajolla in Portuguese and published at Brasil de Fato.