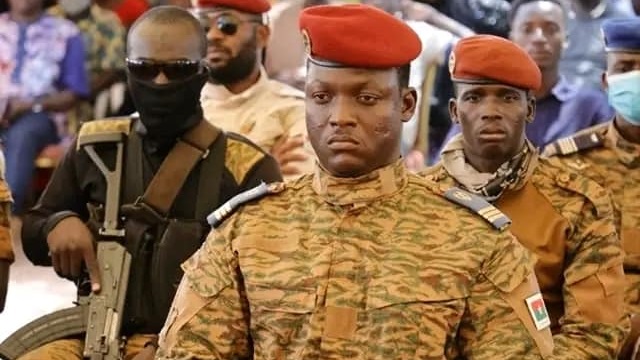 34-year-old Capt. Ibrahim Traore, who deposed his senior Lt. Col Paul-Henri Damiba in a military coup on September 30, was sworn in as the new president of the transitional government of Burkina Faso on Friday, October 21.

On October 14, amid demonstrations by Traore’s supporters in capital Ouagadougou, he had been appointed as the Transitional President by a National Forum, consisting of 300 delegates from the army, police, civil society, unions, and political parties.

This timeline upholds the agreement that the former military government of Damiba had reached with the Economic Community of West African States (ECOWAS) in July this year to hold elections to make way for civilian rule in 24 months, so as to avoid facing sanctions.

However, with the government having lost 40% of the country’s territory to Islamist terrorist organizations that are committing repeated atrocities on civilians, securing the country to hold such an election in less than two years is an uphill task. Two governments have fallen after popular coups this year, owing mainly to their failure to secure the civilian population from terrorist attacks.

Burkina Faso hosts a significant portion of the currently 3,000-strong French forces, deployed under Operation Barkhane since 2014, in France’s former colonies in Africa’s Sahel to fight the Islamist insurgencies France itself helped create by participating in NATO’s war on Libya in 2011.

Since the start of this counter-insurgency operation, incidents of organized violence in Burkina Faso went up from 16 a year in 2014 to 1,315 by the end of 2021. Under the government of Roch Kabore, president of Burkina Faso between 2015 and January 2022, the country lost a third of its territory, including to Al-Qaeda affiliated groups while in a security partnership with France.

Under these circumstances, amid mass demonstrations against French deployment, a group established within the army called the Patriotic Movement for Safeguard and Restoration (MPSR), led by Damiba, seized power in a coup against Kabore on January 24, 2022.

“People’s expectations were high after Damiba’s coup. They first expected an improvement in the security in the country as promised by the MPSR,” Moussa Diallo, General Secretary of the General Labor Confederation of Burkina (CGT-B), told Peoples Dispatch. Burkinabes had largely trusted Damiba to fulfill the stated “primary objective” of the coup, which was “the restoration of the national territory,” he said.

However, Damiba’s military government not only failed to recover lost territory but also lost more land to terrorist groups, and area under Islamist control went up from a third to 40% in the eight months under his leadership. The coup against him on September 30 by his junior officer, Captain Traore, came from within the MPSR itself.

In the aftermath of the coup, protesters also attacked the French embassy in Ouagadougou after the new junta’s spokesperson claimed on television that “Damiba [had] tried to retreat to the Kamboinsin French military base to prepare a counter offensive.”

The French Foreign Ministry said that the “camp where the French forces are located has never welcomed Paul-Henri Sandaogo Damiba, nor has [their] embassy.” Mondafrique reported, however, that “contrary to denials” by France, Damiba “was indeed a refugee in the camp of the French special forces,” according to its sources. It added that, after the popular mobilization against the French embassy and other French centers in the capital city, Damiba “was forced to capitulate and go into exile in Lomé,” the capital city of neighboring Togo.

The resentment against France is part of a broader regional process. Neighboring Mali has already moved away from relying on French support, turning instead to a security partnership with Russia, citing the failure of French counter-insurgency operations in the region. It was in Mali that the French regional deployment began in 2013 under Operation Serval, before expanding in 2014 under Operation Barkhane to four other former colonies in Sahel, including Burkina Faso.

After two governments fell to popular coups in 2020 and 2021, Mali’s transitional military government asked France to withdraw its troops from the country in February 2022. This was celebrated by demonstrators who had been protesting against French deployment in the country as Mali’s victory against imperialism.

Read: Withdrawal of French troops from Mali is a historic, anti-imperialist victory

The French withdrawal from Mali was completed by mid-August, soon after which Mali’s government complained to the UN Security Council (UNSC) that France had been assisting terror groups in the country, including by air-dropping arms and ammunition.

The US claims that the Russian mercenary group, Wagner, has been operating in Mali since the start of this year. Mali’s government, however, has denied these reports, and claims to be taking assistance only from Russian military advisers to defeat the terrorist groups.

“The populist approach of Malian authorities who have chosen Russia in their fight against terrorism has also contributed” to the popularity of the idea of a security partnership with Russia as an alternative to Burkina Faso’s dependence on France, Diallo added.

The “exacerbation of anti-imperialist sentiment against France in Burkina Faso” has been driving the popular demand for a partnership with Russia, Diallo explained. “It can be seen that the presence of French troops in Burkina Faso does not add anything to the fight against terrorism; on the contrary, the security crisis has only been getting worse. There are people who suspect French imperialism of instrumentalizing armed terrorist groups to justify its presence in the Sahel and plunder its resources,” he added.

“In such a context, Russia is considered as a power opposed to France, [and] has proclaimed itself since the period of the USSR as an anti-colonialist and anti-imperialist power. This anti-colonialist and anti-imperialist past works in favor of Russia,” he further elaborated, adding on a note of caution, however, that this could be used to “lure populations” into “blindly believing” that Russia holds a solution to Burkina Faso’s crisis.

Amid several reports that the Wagner group is attempting to strike a deal to work with Burkina Faso’s government, its founder, Yevgeny Prigozhin, welcomed the coup and hailed Traore for doing “what was necessary… for the good of the people”.

He added further that given the dire security situation in the country, the task of defeating terrorism could not be a “prerogative of the Burkinabe army alone.” Diallo stressed the need to mobilize vast “populations in the fight against terrorism by organizing them, training them, and providing them with substantial means of defense.”

Speaking on behalf of the CGT-B, he clarified that their vision of how to defeat terrorist groups does not “exclude the possibility of establishing multilateral or bilateral relations with Russia or with any other state.”

However, “the French troops stationed in Burkina Faso often carry out operations on our territory and in the sub-region without even involving the Burkinabe soldiers. These agreements on several points squarely alienate the sovereignty of the people of Burkina Faso,” argued Diallo.

“What we reject are partnerships that alienate the sovereignty of our country and our people, that prevent us from freely establishing cooperative relationships with partners of our choice,” he concluded.