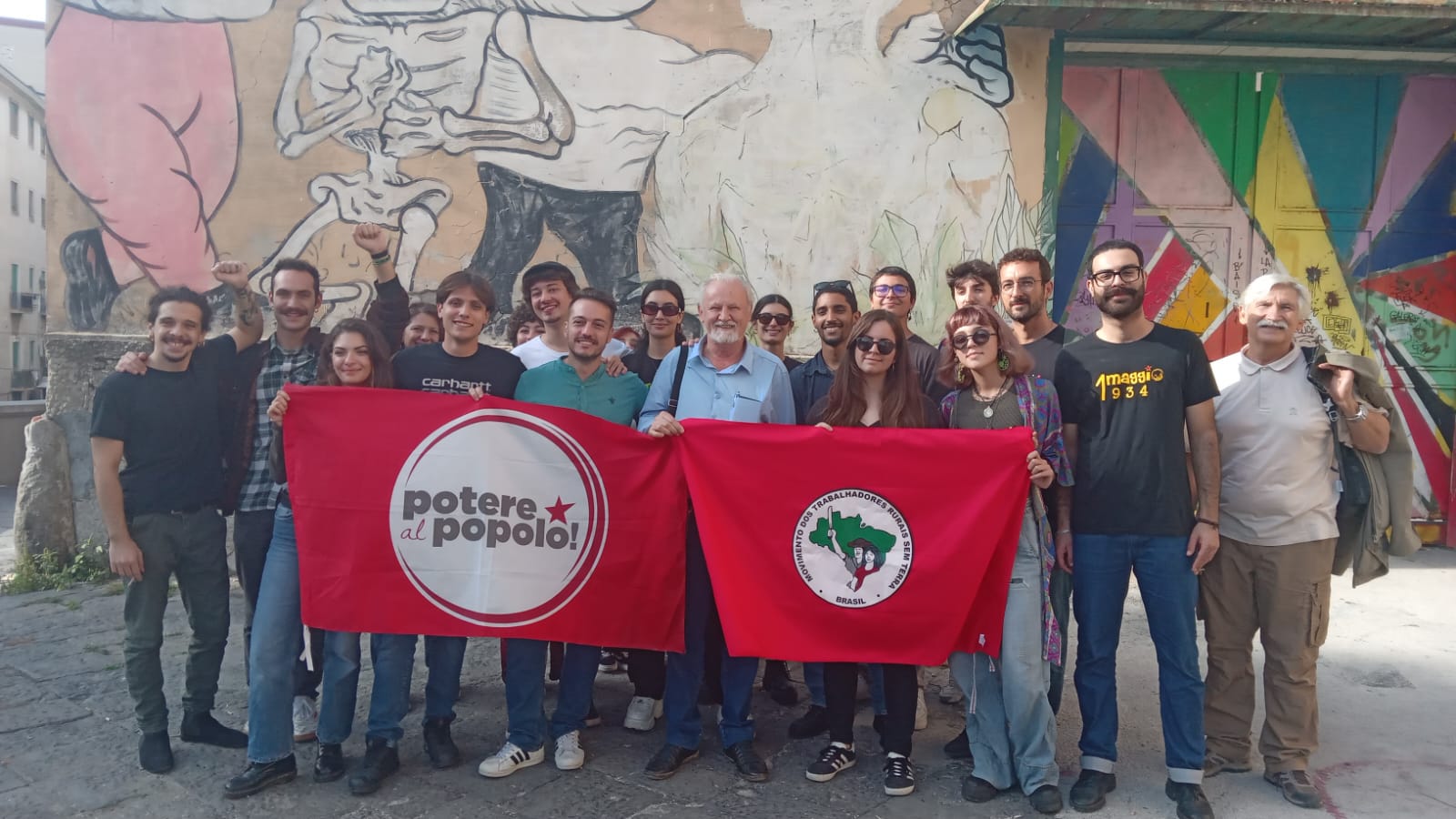 Members of the Italian left party Potere al Popolo met João Pedro Stedile, of the Landless Rural Workers’ Movement of Brazil (MST) on Wednesday October 26. The landless workers’ movement leader, who is also a member of the International Peoples’ Assembly (IPA), visited the southern Italian city of Naples while in Italy to participate in Pope Francis’ International Peace Conference.

Peoples Dispatch spoke to Giuliano Granato, a national spokesperson of Potere al Popolo about the exchange between the left party and the Brazilian leader, as well as the rise of neo-fascism in Italy and Brazil.

Peoples Dispatch: Tell us about the visit of João Pedro Stedile to Naples.

Giuliano Granato: João Pedro came to Italy and he came especially to Naples to speak at a conference at the University of Naples “L’Orientale” about what is happening in Brazil.

He also visited our Popular Clinic, where more than 40 scientists, doctors, nurses take care of more than 3,000 people every year for free. They do not have a salary for their activities in this place, nor does any patient have to pay one euro for their health.

The MST leader had the opportunity to talk about internationalist activities and how they serve to develop solidarity between peoples. In our case, between the Italian people and the peoples of the world, and also to have exchanges with the youth on the need for political training and to study in schools, to build new methods of entrepreneurship, and to build the struggle at the international level.

João Pedro also had the opportunity to visit the criminal asylum at l’OPG [now an occupied space where the Naples branch of Potere al Popolo works]. Under the Bourbons and under the kingdom of Italy it served as a prison. During the time of fascism it was transformed into a criminal asylum and functioned as such until 2007. In 2007 it was closed, in 2008 it was abandoned and in 2015 it was occupied by political activists and this site was born in 2017.

Shortly after the visit to the prison, João Pedro read some letters written by some of the people incarcerated at the Criminal Asylum. Together with the activists in Naples, he reflected on the memory of suffering, but also of the importance of political and social subjects who fight for mental health. In the South of Europe, mental health is not on the political agenda of the big political parties, but it is on the agenda of the daily life of thousands of people.

PD: What was discussed in the conference at the University of Naples?

GG: João Pedro spoke to us first of all about capitalism in Brazil in the countryside, showing us the three models that are in competition.

First, the latifundia model, not only a huge territorial extension of these lands that belong to the big landowners, but also a model of appropriation of the resources of the commons that belong to the people. Secondly, the model of agribusiness. And thirdly, there is peasant agriculture, the only model that is sustainable from a human, social and ecological point of view. The peasant model foresees that peasants cultivate the land first of all for their own subsistence, for their own communities. The eventual surplus is put to the market. And since the peasants are the first to consume what they produce, they have no interest in using poison and pesticides.

Meanwhile in the other two models, the owners of the land can live anywhere and they have no interest in not using poisons, because they are not the consumers of their products.

Secondly, João Pedro spoke to us about the political situation in Brazil. He explained the power relations in the countryside, the historical trajectory of the obstacles against Lula’s candidacy and the attacks on PT and Lula himself, which allow us to understand what power is. Power is not only political power, but also media power. Fake news and lies were decisive in guiding the consensus towards Bolsonaro and against the PT, Dilma, and Lula.

And of course, the landless workers’ movement leader also spoke of the struggle that is going on in Brazil and why this struggle is of central importance. He spoke not only of the movement for land, but broader movements and struggles of social and popular struggles that have engaged in the political battle in the country, as has Potere al Popolo in Italy.

PD: What similarities do you see between the growing neo-fascism in Europe and Brazil?

GG: Bolsonaro’s government was a neoliberal government until it worked for the social destruction and attacked the popular strata, of the weakest sectors, of the population, of the workers, of the women workers and of the LGBTQI+ community, of the Black people, of the Indigenous people.

And here a few decades ago, and speaking a few years ago, there was talk of the social right-wing, a right-wing that yes, is fascist, but attentive to the popular classes.

The government in Italy adheres to and upholds the international logic of neoliberalism. It has spoken of the need to fight for a minimum wage for instruments for the poorest, similar to the family in Brazil, for example, and at the same time to allow companies to do what they want to do with complete freedom.

And this adherence to neoliberalism is going to be achieved with an international positioning that is linked, that is subordinate to NATO and also to Washington. So in Italy, there is not going to be any questioning of its international role, the support for the war in Ukraine, the sending of weapons to Ukraine and also the role of China as an adversary, as a fatal enemy of the US empire, to which Europe also belongs.

They talk about the traditional family as if it is the only normal family, and that homosexuals show that the LGBT community is outside of God’s design, and they are going to continue in this attack exactly as Bolsonaro did.

Bolsonaro and now the right-wing in Italy have been enabling a part of society that was silent because they were ashamed of their own positions or because they were socially denied the possibility to speak loudly, to express their racism, their classism, their homophobia, their misogyny.

PD: Why do you as Potere al Popolo stand in solidarity with the struggle of the Brazilian people?

GG: We are in solidarity with and very interested in what is happening in Brazil for different reasons. First, Brazil is not a country like other countries. Brazil is a continental country. What happens in Brazil is going to have an effect on what happens, not just in the Latin American continent, but in the whole world.

Brazil is a continental country that had the experience of a neo-fascist government, of a government that resembles in many, many ways what could be the new Italian government headed by Georgia Meloni.