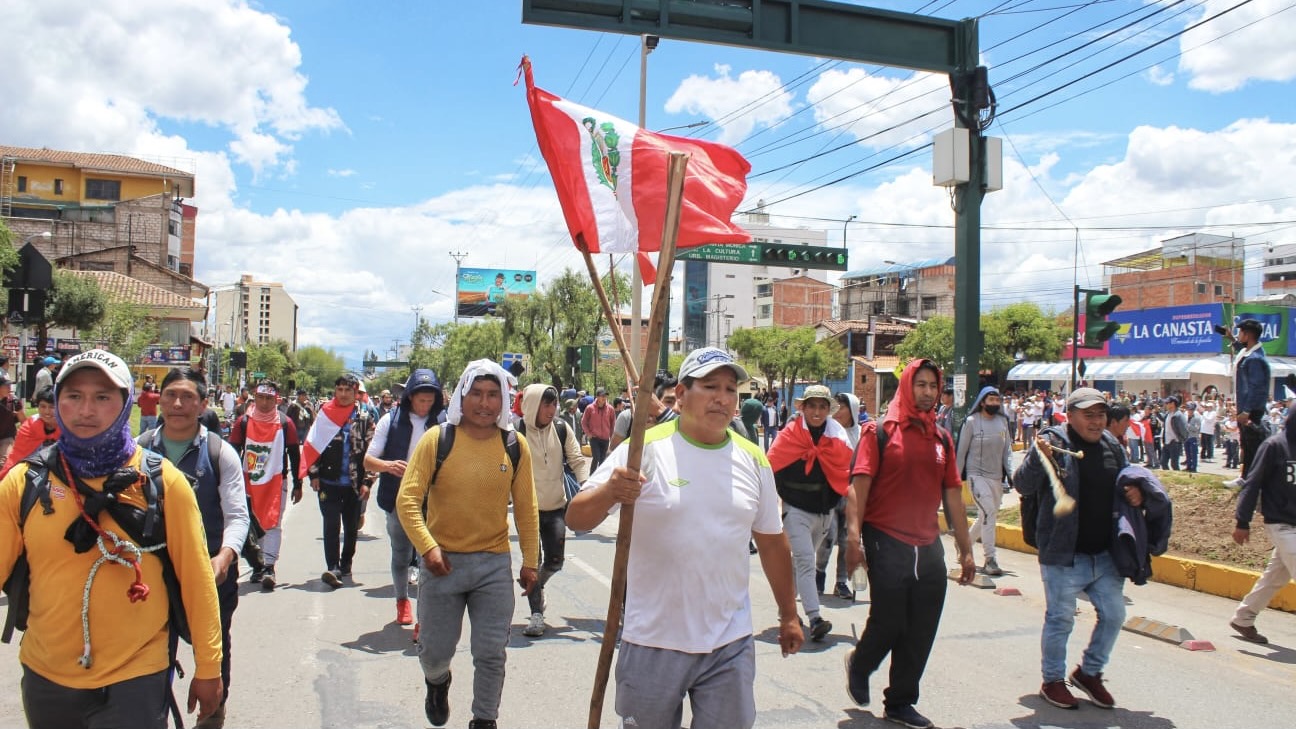 Since December 7, tens of thousands of Peruvians have been protesting in different parts of the country, demanding release and reinstatement of President Pedro Castillo, closure of the Congress, new elections and new constitution through a Constituent Assembly. Photo: Wilson Chilo / Wayka Peru

Since December 7, tens of thousands of citizens have been protesting in different parts of Peru against the ouster of democratically elected left-wing President Pedro Castillo in a legislative coup carried out by the right-wing dominated unicameral Congress.

For the last week, Peruvians have been on the streets demanding that the former President Castillo, who was illegally arrested following his removal from office, be immediately released and reinstated. They are also demanding the effective dissolution of the Congress which currently has an 11% approval rating. The citizens are also demanding that a Constituent Assembly be convened to draft a new constitution to replace the current neoliberal one, which favors the right-wing oligarchy. The 1993 Peruvian Constitution was written and imposed during the far-right dictatorship of Alberto Fujimori (July 1990–November 2000).

The protesters have been organizing mobilizations, road blockades, and occupying local airports across the country demanding structural changes. The agrarian unions, peasant and Indigenous movements as well as social and women’s rights organizations have embarked on an indefinite national strike, beginning December 13, to push for these demands. Several student associations and teachers unions have also joined the protests. The protests are taking place in 13 of the country’s 24 regions.

The government of newly appointed President Dina Boluarte, who entered into a political alliance with the right-wing to govern, has responded to protests with the militarization of rural provinces where there are large mobilizations taking place. On December 12, Boluarte declared a “state of emergency” in several provinces, restricting the citizens’ right to freedom of movement and assembly.

The police and military have been heavily repressing these protests, using tear gas as well as firearms. The Ombudsman’s Office, on December 13, reported that at least seven protesters, including two minors, had been killed in the police repression in Apurímac and Arequipa regions due to injuries suffered from firearms. It also reported that at least 32 people had been severely wounded.

On December 14, the Ombudsman’s Office reported that a minor girl and a 20-year-old boy suffered eye injuries during repression against protesters in the Andahuaylas province in Apurímac. Additionally, the residents denounced that more than 50 protesters were detained in Andahuaylas and had been locked in inhumane conditions at the Abancay police station.

Former President Castillo, by means of a letter shared on his Twitter, called for an end to the repression and blamed President Boluarte for the deaths.

“Given the serious acts of massacre of my people, I urge the National Police and the Armed Forces to lay down their arms in order to stop the bloodshed of my people. Ms. Dina Boluarte be considerate of the place you occupy. I hold you and your entire circle that accompanies you responsible for the ferocious attacks on my compatriots. I call on the people to remain alert and optimistic,” wrote Castillo.

Castillo, who had been preliminarily detained for a period of seven days and was supposed to be released on December 14, called on the people to accompany him during his hearing and receive him free at the Directorate of Special Operations (DIROES) in the capital Lima. He said that he was “unjustly and arbitrarily detained” and that he had “not committed any crime of rebellion or conspiracy.” He thanked the people “for their confidence, effort, struggle and affinity” and vowed that he would “never resign or abandon this popular cause that has got me here (presidency).”

Nevertheless, on December 14, the Judiciary of Peru suspended the hearing and extended Castillo’s preliminary detention for another 48 hours. It scheduled another hearing for December 15 to rule on a request made by the Prosecutor’s Office for the extension of the preventive detention against Castillo for 18 months.

Castillo rejected the step taken by the Prosecutor’s Office and called on the Inter-American Commission on Human Rights (IACHR) to protect his rights.

“Enough is enough! The abuse, humiliation and maltreatment continue. Today they coerce my freedom once again with 18 months of pretrial detention. I request the IACHR to intercede for my rights and the rights of my Peruvian brothers who demand justice. I hold judges and prosecutors responsible for what happens in the country. Millions of thanks to my compatriots for their love and support. Only the people save the people

Enough! The assault, humiliation and mistreatment continues. Today they coerced my freedom again with 18 months of pretrial detention. I ask the IACHR to intercede for my rights and those of my Peruvian brothers and sisters who demand justice. I hold the judges and prosecutors responsible for what happens in the country. I’m thankful to my compatriots for their love and support. Only the people save the people,” wrote Castillo.

“It is not new to the world that President Castillo Terrones, from the day of his election, had been the victim of undemocratic harassment, in violation of Article 23 of the American Convention on Human Rights, “Costa Rica Pact”, adopted on November 22,1969, to later be the subject of judicial treatment in the same manner, in violation of article 25 of the aforementioned convention,” said the heads of states in a joint statement.

“Our governments call on all the actors involved in the previous process to prioritize the will of the citizens that was pronounced at the polls. It is the way of interpreting the scope and meanings of the notion of democracy contained in the Inter-American System of Human Rights. We urge those who make up the institutions to refrain from reversing the popular will expressed by free suffrage,” they added.

They also requested that “the authorities fully respect the human rights of President Pedro Castillo and that he be guaranteed judicial protection under the terms enshrined in the last cited article.”

In his last letter shared on Twitter, Castillo, “on behalf of the thousands of Peruvians who have turned to the streets and spend the night there,” thanked President Petro, President Obrador, President Arce and President Fernández “for affinity and solidarity with my people and our legitimate Government.”

Castillo took the opportunity to recall that he was chosen “by the forgotten men and women of deep Peru, by the dispossessed who have been neglected for more than 200 years,” and condemned that since he took office, the right-wing opposition majority Congress “had not stopped for a minute in rejecting such a decision of the people.”

He said that in their “nefarious attitudes,” the legislators “refused (his request) to visit the sister nations of Colombia and Mexico,” and added that “in this difficult context, the coup plotters, the exploiting and starving sectors, today they want to silence my people with the role of the press, which has just received 1.8 billion soles (472 million USD) to silence the massacre and the crisis throughout Peru, an amount that my government allocated for the Second Agrarian Reform, as well as for the Christmas bonus to the Police and the National Magisterium. It is urgent to recover that benefit.”

The long legislative coup against Castillo

Peru’s Congress, where the Popular Force, Popular Renewal, Avanza País, We are Peru and Alianza para el Progreso, among other conservative parties hold a majority, made constant attempts to overthrow Castillo and destabilize his government soon after he assumed the presidency in late July 2021. On December 7, after two failed impeachment motions over the past one and half year, they succeeded in achieving their agenda. On that day, the Congress approved the third vacancy motion against Castillo, which led to his immediate dismissal from office.

In the following hours, he was arrested and charged for allegedly “breaching constitutional order” for having tried to dissolve the Congress before the vote on the motion. The Prosecutor’s Office is investigating Castillo for the crimes of rebellion and conspiracy, abuse of authority and public disturbance for announcing the dissolution of Congress.

On December 12, the Congress, which over the years had been passing laws that strip the president of their powers and make the legislature the supreme power in Peru, advanced further and approved a bill to deprive Castillo of his presidential immunity, enabling the Prosecutor’s Office to criminally prosecute him.

Nonetheless, the people of Peru declare to be determined to restore and strengthen democracy. Following the extension of Castillo’s preliminary detention, the social movements and trade unions across the country have called for intensification of protest measures. The social sectors called for nationwide mobilizations on December 15 in support of Castillo and in defense of their demands.

Additionally, the social pressure also drove her government to increase repressive measures. Boluarte’s Defense Minister, Alberto Otárola, announced the imposition for a 30-day-long state of emergency at the national level in Peru. 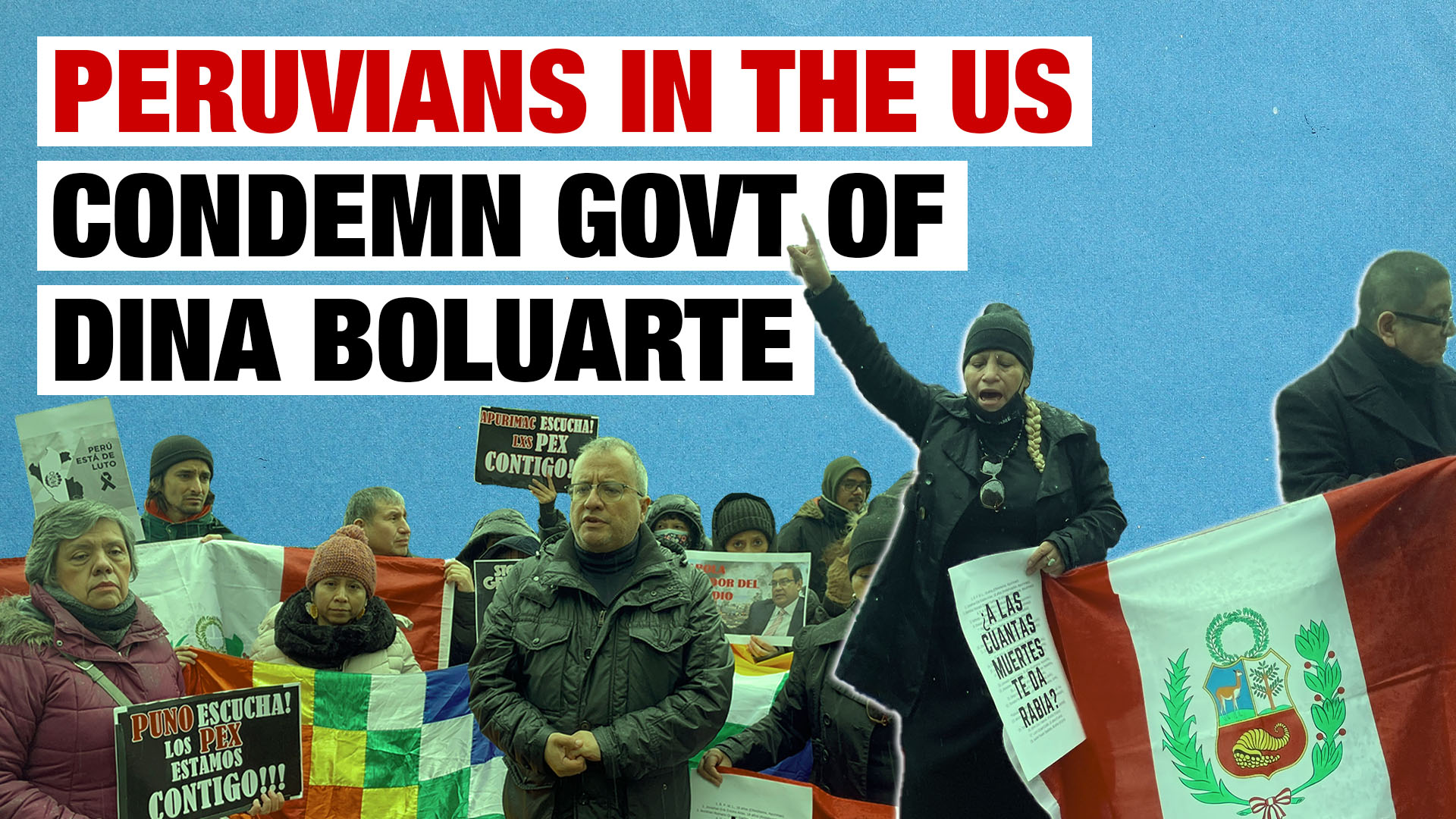