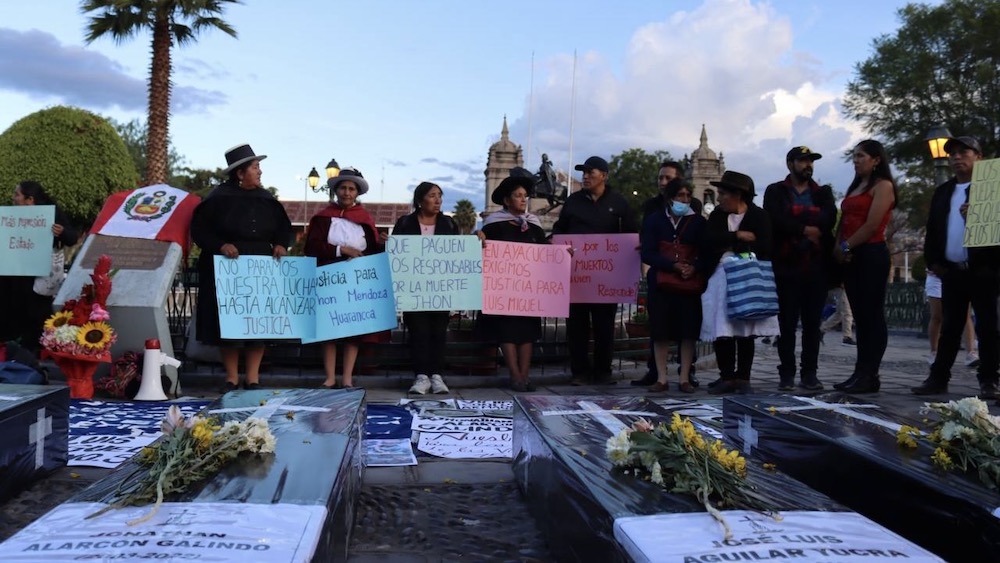 Women from the Ayacucho-based National Association of Relatives of Kidnapped, Detained and Disappeared of Peru (ANFASEP) hold signs in the central plaza of Ayacucho condemning the deaths of protesters. Photo: Zoe Alexandra

On December 15, 2022, while helicopters flew overhead, members of Peru’s national army shot down civilians with live bullets in the outskirts of the city of Ayacucho. This action was in response to a national strike and mobilization to protest the coup d’état that deposed President Pedro Castillo on December 7.

On December 15, hundreds of university students, shopkeepers, street vendors, agricultural workers, and activists gathered at the center of Ayacucho to express their discontent over the removal of Castillo and continued their mobilization toward the airport. Similar action was witnessed in several other cities across the southern Andean region of the country.

As protesters approached the airport, members of the armed forces opened fire and shot tear gas canisters directly at them. The firing by the army from the helicopters proved to be the most lethal. As the hundreds of unarmed people ran for their lives, the shooting continued.

Ten people were killed as a result of this violence inflicted by the army, and dozens more were injured, according to official numbers provided by the ombudsman’s office. At least six people are still fighting for their lives in hospitals in Peru’s capital Lima and in Ayacucho. Autopsies of 10 of those who died in Ayacucho show that six of the victims died from gunshot wounds to the chest. The youngest was just 15 years old.

On December 27, Reuters reported how one of these fatal victims in Ayacucho, 51-year-old Edgar Prado, was shot and killed while attempting to help someone else who had been shot down during the protests.

The exceedingly violent response of the security forces to the anti-coup protests across Peru was widely condemned. A delegation of the Inter-American Commission on Human Rights (IACHR) visited the country from December 20 to 22 to receive testimonies from local human rights organizations and victims about the violent repression suffered by protesters and also spoke to families of the 28 fatal victims. The delegation traveled to Ayacucho on December 22.

More than a dozen other family members, Ayacucho inhabitants, organizers, and a couple of independent journalists, including myself, waited on the sidewalk of one of the city’s narrow and colorful streets as the meeting was underway. As people came and went, much of the events and tragedies of December 15 were recounted.

“They won’t show you this on the news here,” Carmen (name changed) told me as she showed me a video on her phone of a young boy with blood all over his shirt being dragged to safety by fellow protesters. “That’s her nephew,” she said, pointing to a woman sitting on the ground.

Pedro Huamani, a 70-year-old man who is a member of the Front in Defense of the People of Ayacucho (FREDEPA), was accompanying the victims waiting outside the IACHR meeting. “We have suffered a terrible loss,” he told me, “I was present that day in a peaceful march toward the airport.”

Carmen brought over some of her friends and one of them, who was wearing a gray sweatsuit, told me, “We all live near the airport, and saw everything happen. You should’ve seen how they shot them down like animals. We tried to help some of the injured, but it was hard.”

The massacre in Ayacucho, as well as the violent repression across the country, has only intensified people’s demand that Dina Boluarte step down. Boluarte was sworn in on December 7 immediately following the coup against Castillo. In interviews and public addresses, she has justified the use of force by police against protesters calling their actions as acts of “terrorism” and “vandalism.”

Huamani, while shaking and holding back tears, said: “She is a murderous president and in Huamanga, we do not want her, nor do we recognize her as president because this woman ordered the police and the army to shoot at us Peruvians. And these bullets, these weapons, are really bought by us, not by the army, nor the soldiers, but by the people. And for them to kill us is really horrible.”

The anger felt by Ayacucho residents is also linked to the historical undermining of Peruvian democracy and the economic exclusion suffered by the regions outside of Lima. Huamani explained: “They took out our president [Castillo] so this is not a democracy. We are not a democracy, we are in [state of] war, but not just in Ayacucho and Huamanga, but also in Arequipa, Apurímac, Cusco. In these regions, we are suffering from poverty, we can no longer survive, we are dying of hunger… and these right wingers want to make us their slaves, but we won’t permit this because we are responding and resisting.”

December 15 was not the first time civilians in Ayacucho were massacred by the Peruvian armed forces. Many who were present on December 15 said that the warlike treatment received by the peaceful protesters was reminiscent of the days of the two-decades-long internal armed conflict that Peruvians suffered through more than 20 years ago.

“They still treat us as if we were all terrorists,” a family member of one of the victims of the protests pointed out.

As part of the state’s campaign against the guerrilla insurgency, it tortured, detained, disappeared, and murdered tens of thousands of innocent peasants and Indigenous people, accusing them of supporting or being part of the insurgency.

The population of Ayacucho was one of the hardest hit. According to reports by the Truth and Reconciliation Commission, which was set up to look into the human rights violations, of the estimated 69,280 fatal victims of the internal armed conflict in Peru from 1980-2000, 26,000 were killed or disappeared by state actors or insurgent groups in Ayacucho. Thousands of people that fled their towns for the city of Ayacucho during the conflict continue to search for their loved ones and demand justice.

One of them is Paula Aguilar Yucra, who I met outside the IACHR meeting. Like more than 60 percent of people in Ayacucho, Indigenous Quechua is her first language. The 63-year-old is a member of the Ayacucho-based National Association of Relatives of Kidnapped, Detained and Disappeared of Peru (ANFASEP). She fled her rural community in Usmay for Ayacucho in 1984 after her mother was killed and her brother was taken by soldiers and never seen again.

Nearly 40 years later, she mourns again. Her grandson, 20-year-old José Luis Aguilar Yucra, father of a two-year-old boy, was killed on December 15 by a bullet to the head as he attempted to make his way home from work.

In a vigil held on the afternoon of December 22, Paula stood tall with the other members of ANFASEP and held a sign reading: “Fighting today does not mean dying tomorrow.”

Zoe Alexandra is a journalist and co-editor of Peoples Dispatch.