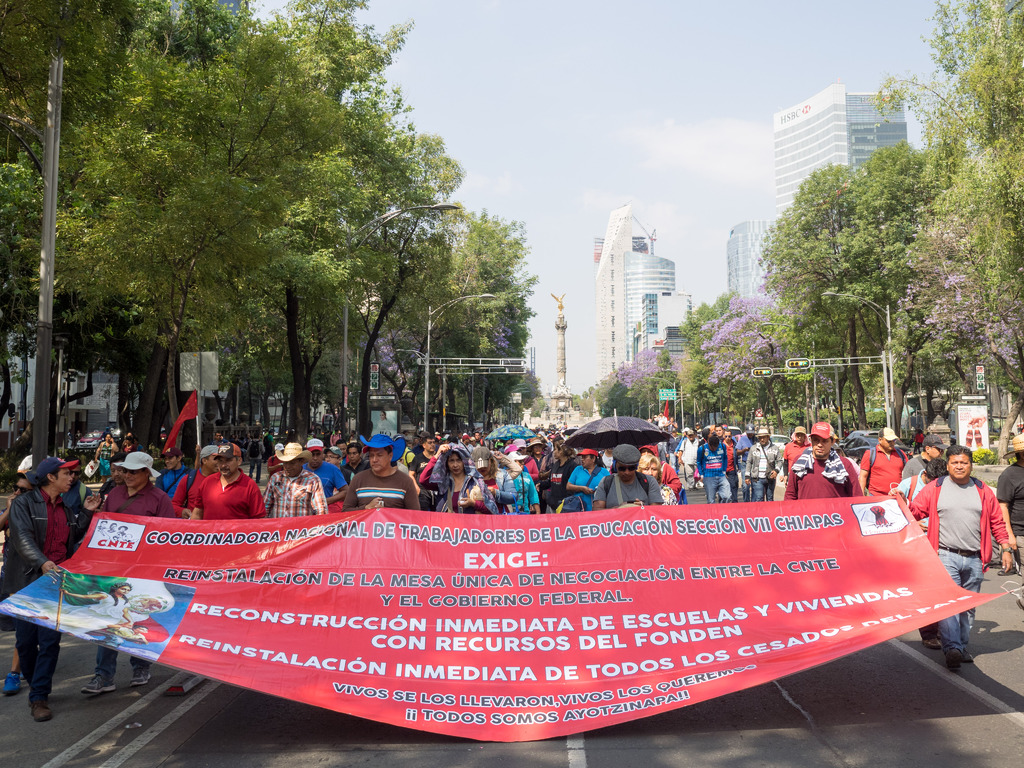 Workers affiliated with the SNTE-CNTE from throughout Mexico converged on the capital, marching down Paseo de la Reforma as part of a 48-hour work stoppage to demand a dialogue with the government of Enrique Peña Nieto, April 9, 2018. Photo credit: José Luis Granados Ceja

The Dawn News spoke to Mirna Santiago Gallego from the National Political Direction of the National Coordinator of Education Workers (CNTE) and a member of the Mexican chapter of Social Movements towards ALBA, about the union’s ongoing struggles and the actions they will be taking up on International Workers’ Day. Mexico is currently facing a political, economic, social and human rights crisis, at the root of which is 30 years of harsh neoliberal policies. Today, workers from CNTE will begin a 72-hour-work stoppage against the education reform imposed by the government of Enrique Peña Nieto, as well as the policy of militarization that has led to countless deaths.

Peoples Dispatch: The CNTE is currently preparing for a national strike. Can you tell us a little about what it is about? What are the main demands? What is the education reform?

Mirna Santiago Gallego: The crisis in Mexico that has reached catastrophic dimensions is without a doubt, the result of more than 30 years of neoliberalism. Privatization in the areas of health, education, communications, natural and energy resources were introduced in the first year of the government of Enrique Peña Nieto in 2013. Through modifications to the constitution, these structural reforms were carried forward to legalize the plundering of the nation, the looting of the territories and labor slavery.

The poorly named education reform that really is labor and administrative reform is centered on punitive evaluation and involves the application of standardized tests for students and teachers. In the case of teachers, the exams are for entrance, promotions and permanence in the job.These exams are mandated and designed by the Organisation for Economic Co-operation and Development. The objective is to convert education into merchandise rather than it being a human right that corresponds to our needs as Mexican people. It is worth pointing out that to impose this terrible reform, several constitutional articles were modified.

We observe this wave of reform across the continent as part of the geo-strategic plan of the United States empire for the neo-colonization of the people of America.

The CNTE, since its founding 39 years ago, has struggled for the democratization of education within the union and in the country. The current period of struggle began in 2013, with the imposition of the reform and its secondary laws and has seen the participation of hundreds of thousands of educational workers. With the 24 and 48-hour work stoppages, it entered a new stage. The next phase will be a 72-hour stoppage that begins on April 30 and will go on till May 2.

In this context, there will be national-level marches, public meetings and highway blockades. On May 1, there will be a national representative assembly in Mexico City, where the date for a national strike will be fixed. On May 2, a document will be submitted to the Secretariat of the Interior of the federal government.

This document will express the principal demands of the CNTE. These include the repeal of education reform, immediate reinstallation of the national unitary negotiation roundtable and the immediate reinstatement without conditions of 586 fired teachers for not using the punitive evaluation (as stipulated in the education reform). We have also sought responses to the massacres committed during the six years of Enrique Peña Nieto. These include incidents at Iguala, Nochixtlan (a municipality of Oaxaca where on July 19, 2016, the Federal Police assassinated 11 inhabitants of the municipality following teacher-led protests against education reform), Arantepakua (a community of the Nahuatzen municipality in the Michoacan State, where the Federal Police assassinated 5 members of the community, including minors, on April 5, 2017, during protests against education reform). We demand that those responsible be punished and justice be delivered to those affected. Finally, we also seek the presentation with life of the 43 teaching college students of Ayotzinapa, Guerrero, and liberty to the political prisoners and prisoners of conscience.

PD: What are the principal problems faced by workers in Mexico?

MSG: The struggles of the workers in various sectors come at a time of worsening labor precarity. This is a product of the structural reforms that take away social security that is linked to retirement and pensions, medical attention, and loans. Hiring for permanent positions has stopped and salaries are also precarious. All these have led to the deployment of labor intermediaries and outsourcing, extending poverty in our country to more than 70 million inhabitants.

PD: Although the CNTE is a union of educational workers, it plays a very important role within organized Mexican society in mobilizing and organizing diverse sectors. What have been the moments of unity among the diverse social movements and organizations in the last year?

MSG: As a consequence of the structural reforms in Mexico, there was a spike in fuel prices. This led to a civic uprising and the creation of assemblies of citizens and people’s resistance. In this new phase of struggle, the CNTE called upon people to build a national project – a project for a new country – where we have to work together not only in common struggles, but also towards social transformation. This implies transcending the elections with our own project and continuing to build the homeland that we need as Mexicans.

PD: What has been the process of resistance to the Internal Security Law? Why is it important to resist this law? What is the impact of this law on social organizations?

MSG: The Internal Security Law is the culmination of the structural reforms. It protects them by not allowing organization, mobilization and social protest, and legalizes repression carried out by the army and the unitary command. The crisis of the Mexican state and the electoral politics has not allowed them to implement this law that persecutes and criminalizes social protest in entirety. In the face of these excesses – of destruction, death and state terrorism – the Mexican working class is working towards mobilizing the masses from social organizations. This is happening not only nationally, but also at the international level, where we will join the resistance and struggle against the imperialist policies.

In the CNTE, our perspective is to overcome the context of electoral politics through the unity of the people, communities and social movements. This will happen through the mobilization of the workers of the countryside and the city, the organized and unorganized people of our country, and on an international level, with a continent-wide pedagogical project for decolonization, and from the Social Movements towards ALBA in the frame of proletarian internationalism.

PD: What is the position of CNTE towards the upcoming elections?

MSG: In the dispute for presidency, we believe that there is no project of the left or proposal of a new nation. There is just more of the same. The campaigns are based on disqualification, lies, cheating and coercion. Candidates ally with businessmen and criminals, and politicians migrate from one party to another without any thought of their supposed ideological characteristics. The CNTE has expressed its political position following its Fourth Extraordinary Congress in March. We condemn and reject the political parties that passed the structural reforms and signed the pact for Mexico.

As such, we declare our ideological, political and economic independence from all political parties that participate in the electoral disputes of today, as well as from the ‘yellow unions’. That being said, we respect all forms of struggle as long as they they promote class consciousness, and respect the activism and the principles of the CNTE.