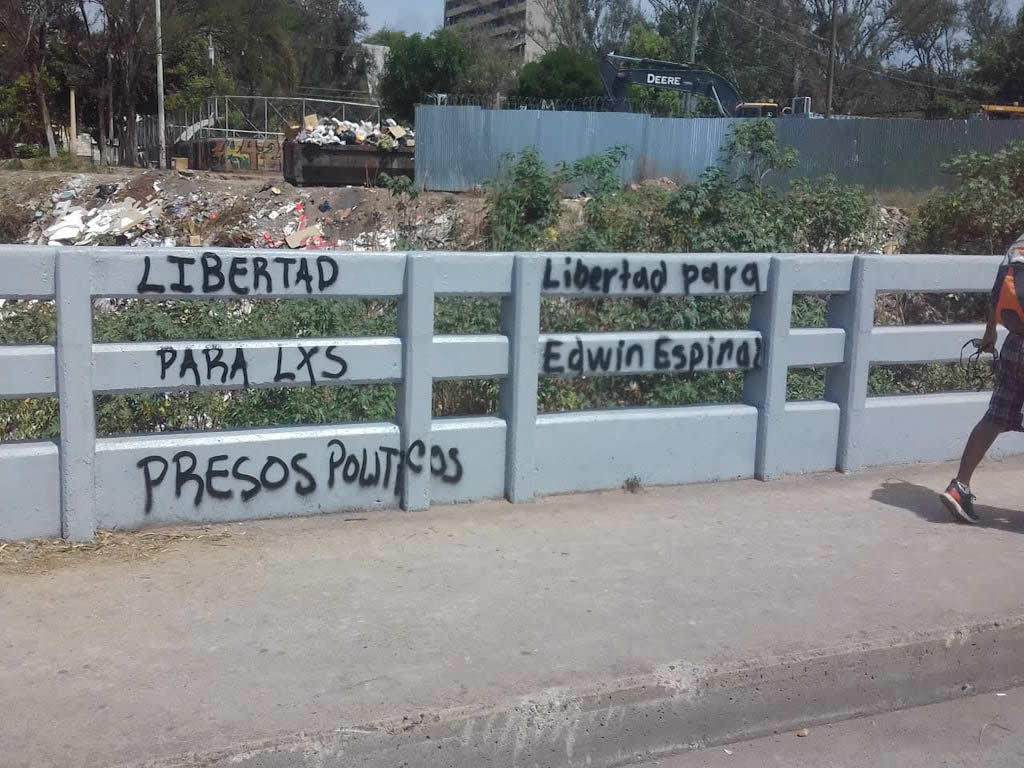 In December 2017, a mass uprising broke out in Honduras after the reelection of President Juan Orlando Hernández (JOH) in a process most citizens and observers termed fraudulent. During this upsurge against the deeply unpopular President, scores of activists were arrested on trumped-up, politically driven charges. Nearly six months later, 22 of them remain imprisoned, with national and international human rights organizations reporting that they have been subjected to torture and dire conditions.

Human rights organizations claim that the government has mostly charged them with common crimes to ensure they are not recognized as political prisoners. Only four of the incarcerated individuals have been charged with terrorism and sedition, while the rest face charges like arson, property damage and use of homemade explosive material, which merely links them to property damage and disturbances that occurred during the weeks of uprisings.

Their cases have been characterized by human rights abuses, as well as legal irregularities. The political prisoners have been subjected to terrible conditions within the prisons. The food, which they get only at irregular intervals, is nearly inedible. They have very little access to water and medical services and there are heavy restrictions on visits from family members.

Following the denouncement of these conditions by their family members and activists, Honduran organizations like the Committee of the Relatives of the Detained-Disappeared in Honduras (which has been in the forefront of organizing the defense of the political prisoners), International Ecumenical Human Rights Observatory and the National Committee of Prevention Against Torture, Cruel, Inhumane and Degrading Treatment, as well as Amnesty International, the Office of the UN High Commission for Human Rights and the International Red Cross (after a great deal of pressure), have entered several prisons where they are held and confirmed the dire conditions.

It is worth highlighting a couple of cases to show the level of persecution and repression suffered by activists and human rights defenders.

The only woman in the group of 22, Lourdes Johana, had her house raided and was arrested on December 26, along with her husband and her brother. Along with eight others, they were accused of burning a police station in their town of Pimienta during the protests on December 20. Lourdes (35) stated in an interview from prison that after the incident on December 20, the sub-inspector of police (who had already been harassing her family, accusing her husband of belonging to a gang) had asked her to meet him. When she arrived, he put a ski mask on her and forced her to get in his car where he proceeded to demand that she identify the people involved in the burning of the police station. She complied and identified some people in photographs. She pointed out that none of the people that she identified have been arrested. Following the incident, Lourdes denounced the sub-inspector to the Special Attorney General of Human Rights, an action she believes was the reason for her arrest, in addition to the family’s participation in the protests against electoral fraud and state violence.

Lourdes, along with her husband and brother, ended up being arrested for the burning of the same station.  Along with the eight others, Lourdes and her two family members were sent to the infamous ‘El Pozo’ prison, a supermax institution for high security prisoners. Her four children are now without their mother, father and their uncle.

Another emblematic case is of Edwin Espinal. He was arrested on January 19, a week before the inauguration of Hernández, and on the eve of a week-long national strike. Edwin is a long-time Honduran activist and has been a target of state repression since the coup d’etat in 2009. He is charged with arson, property damage, and the use of homemade explosive material. He is also under state investigation for terrorism and criminal association related to damages to the Marriott Hotel, a multi-billion dollar US chain, during a January 12 protest in Tegucigalpa.

After initial hearings inside military facilities, he was sent to La Tolva, another high-security prison, along with Raúl Eduardo Álvarez who is also accused of the destruction to the Marriott Hotel. The conditions of their incarceration are severe. The jail has extremely restrictive visitation hours and prisoners are only allowed one hour of sunlight every two weeks. The extreme water shortage meant that prisoners could access water for only 5 minutes a day and they were not even allowed to use containers to store water. Following the visit of several international human rights organizations in March, their access to water was increased to 2 hours a day. Any resistance on behalf of the incarcerated population is brutally repressed. In March, when prisoners protested the lack of access to water, they were attacked and tear gassed by prison guards.

Most recently, after a riot in one of the modules in La Tolva on April 6, authorities collectively punished all prisoners by suspending all phone communication from the prison. However, to date, they have not made any official announcement about the measure. The family members of Edwin and Raúl have not heard from them since the incident and have no information on their wellbeing.

It is important to see their detentions as part of a desperate, chaotic effort by Hernández’s government to crack down on the resistance of the hundreds of thousands of Honduran people who rejected the overt electoral fraud that brought him back to power.

Under JOH, the struggling Central American nation has been plunged even deeper into poverty, violence and unrest. A key reason for this has been the further destabilizing and underfunding of health, education and public sector services, as well as the sale of Honduras’ natural resources and land to international capital. JOH and members of his National Party have also been involved in high-profile corruption scams. A recent law that gave elected officials even greater impunity against prosecution on corruption charges has been denounced by the Mission to Support the Fight against Corruption and Impunity in Honduras of the Organization of American States (OAS). Unsurprisingly, countries like the United States and Canada were some of the first to congratulate JOH on his reelection despite international denouncement and criticism even from the OAS.

The recent caravan of Central American migrants, who crossed Mexico in their march to the US border, was dominated by migrants from Honduras, who following the reelection of JOH and the increasing violence, repression and corruption, see no possibility for a future or even survival in the country.

There is some good news though. On April 25, one of the political prisoners Jhony Andrés Salgado Fuentes, was released from prison though charges have not been dropped. His release gives hope to the rest, who continue fighting for their freedom, maintaining their innocence and demanding justice from the corrupt, sold Honduran state.