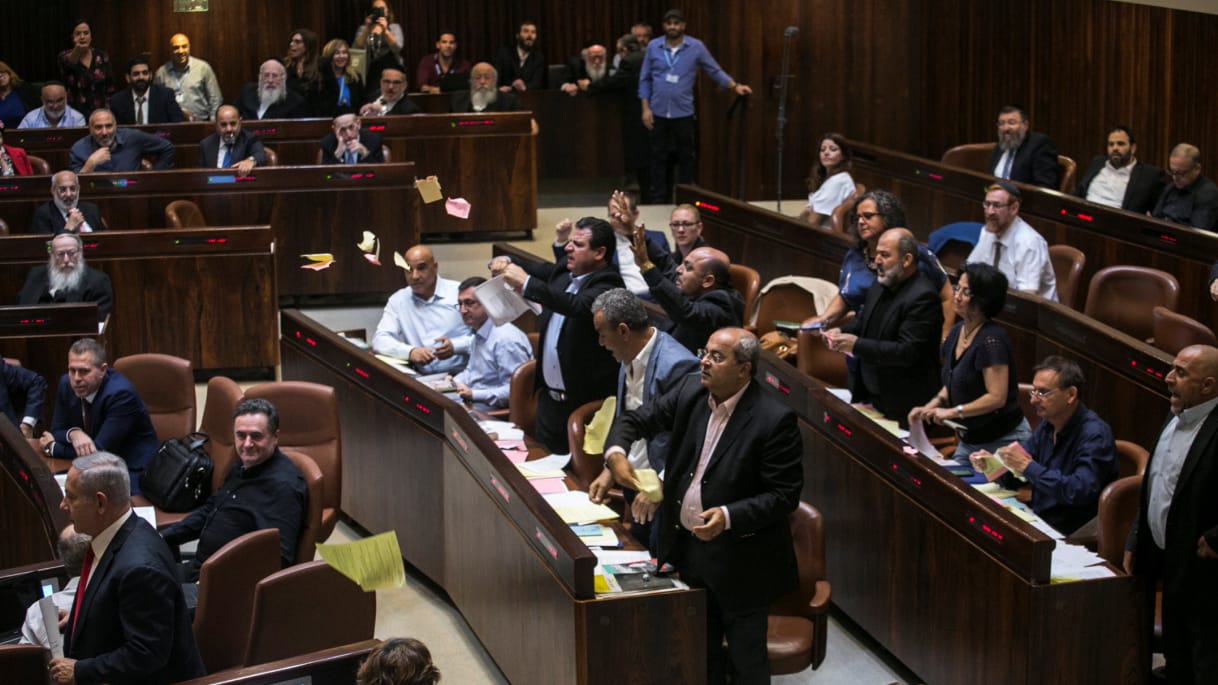 Arab lawmakers tear up copies of the nation-state law in the Knesset, July 19, 2018. Photo: Olivier Fitoussi

The Israeli parliament on Thursday passed a controversial ‘Jewish nation-state law’, which defines Israel as a country exclusively for the Jewish people.

The bill passed by 62 votes to 55, with 2 abstentions. The Arab members of the Knesset labelled it a racist law amounting to apartheid. The bill has given rise to fears of an increase in state-sanctioned discrimination against the already oppressed Palestinian Arab minority.

“I announce with shock and sorrow the death of democracy,” Ahmed Tibi, an Arab lawmaker, told reporters. Ayman Odeh, head of the Arab Joint List, called it “the death of our democracy.”

“The Knesset has passed a law of Jewish supremacy and told us that we will always be second-class citizens,” he added.

There are roughly 1.8 million Arabs in Israel – nearly 20% of Israel’s nine million population. They are mostly Palestinians and their descendants who remained in place after the 1948 Arab-Israeli war. Hundreds of thousands of others were displaced or fled.

Hebrew has been designated the sole official language of the state, and Arabic has been removed. It only has ‘special status.’

The bill declares that Jerusalem, “complete and united, is the capital of Israel.” The bill also declares the Hebrew calendar as the official calendar of the state, recognizes Independence day, days of remembrance and Jewish holidays.

The law stipulates that “Israel is the historic homeland of the Jewish people and that they have an exclusive right to national self-determination in it”.

The bill had some clauses removed after objections from the president and the attorney general, as they would have made into law the establishment of Jewish-only communities, and instructed the courts to rule according to Jewish ritual law in the absence of legal precedence. The final version said, “The state views the development of Jewish settlements as a national value and will act to encourage and promote its establishment.”

Condemning the law on behalf of the EU, a spokeswoman for the EU foreign affairs chief, Federica Mogherini said, “We are concerned, we have expressed this concern and we will continue to engage with Israeli authorities in this context.”