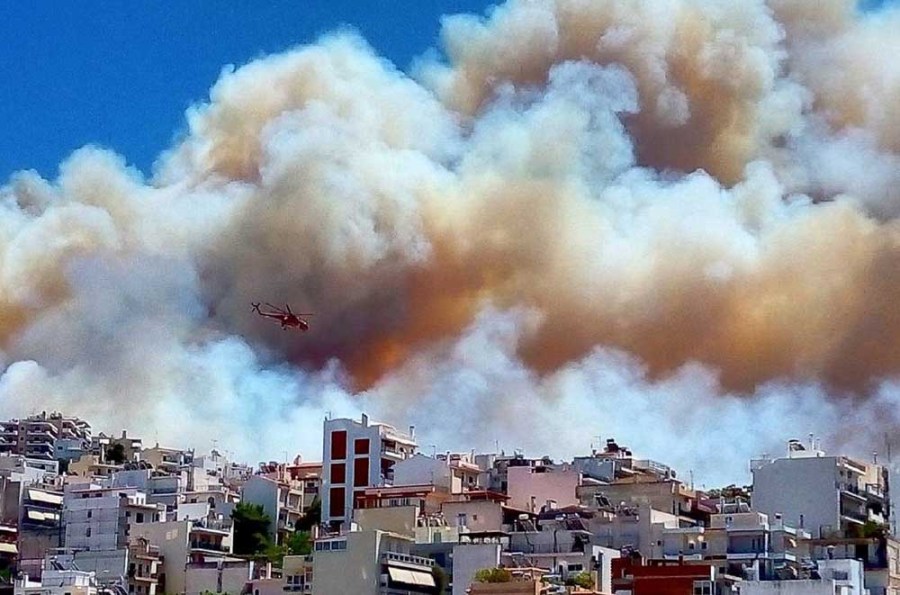 Air Crane working on the fire near Athens (Photo: Dimitris)

The Eurogroup decided on July 20 that the austerity policies in Greece would continue into the next year. Two days later, wild fires broke out in the Attica region of Greece, destroying over the course of a few days more than a thousand homes and 300 vehicles, and killing at least 91. Meanwhile, the state’s fire department and rescue agencies – whose capabilities have been systematically downsized by years of EU-imposed austerity reducing its funding – miserably failed in meeting the challenge.

A day later, as the state agencies continued to struggle, prime minister Alexis Tsipras told the country in a televised address, “The country is going through an unspeakable tragedy.. Today, Greece is mourning and we are declaring three days of national mourning in the memory of those who perished.”

A number of government officials then started rumour-mongering. The fires, Minister of Civil Protection Nikos Toskas said, were “not innocent” and had “indications of arson”, suggesting it was deliberately started. Despite the fire investigation department ruling out on July 27 the possibility of arson and insisting that fire has started accidentally, other government officials continued to peddle the rumour.

Over time, new conspiracy theories emerged in the media, one of which suggested that the fire might have been started in collaboration with Turkish intelligence as a revenge for Greece’s refusal to extradite the soldiers who had escaped to the country after the failed coup attempt in Turkey in 2016.

An Athens-based daily reportedly stated, that “some circles close to the Greek government spread scenarios that Turkish spies used Russian technology to start a fire in the Mati region, where eight former Turkish soldiers who are accused by Ankara as putschists were held,” before further speculating that there was also the possibility that it might in fact have been a false flag operation by the US in order to frame Turkey for getting too close to Russia.

These sensational rumours and speculations glossed over the fundamental problem of the underfunding the public services in charge of confronting the emergency, as a result of a decade-long austerity programme imposed on the country by the EU and the IMF.

Over the period, the budget allocated to the fire service has been reduced from 500 million euros to 354 million. Lack of expenditure on maintenance has left 30% of the department’s fire engines in an unusable condition. “About 15% of our fleet of 1,750 trucks are off the roads because they have chronic problems and are old. Another 15% are in need of spare parts which we can’t afford,” said Dimitris Stathopoulos, the head of Federation of Firefighters.

Last year, a pilot of Canadair – the firefighting plane used in Greece – revealed details about how 50% of those planes were in an unusable condition, some due to ageing without sufficient maintenance or replacement, and others due to the lack of spare parts. Underfunding of hospitals and ambulance services have further reduced their ability to respond to large scale-injuries needing emergency medical care.

Lack of availability of funds also left entire regions prone to such fires, without the capability of training people in civil self-defense and without any official evacuation plans. “Greece has carried out civil defence exercises in only a few areas. There are neither maps showing the high-risk regions and possible escape routes, nor any public campaign to educate people about the risks in their neighbourhood.. There would have been fewer casualties if a few simulations had been carried out in the region, because then, the authorities would have had a better idea of the evacuation challenges and might also have informed the inhabitants about this as well,” Costas Synolakis, a professor of natural disasters at University of Crete, told a Greek daily.

“When the local police chief signalled regional headquarters to sound an evacuation, he discovered that there was no regional evacuation plan for an area that is packed with local tourists in summer,” the Morning Star reported.

Austerity policies also explain why electricity supply collapsed immediately after the blaze. Unable to afford the costs of laying power lines underground as a result of the fiscal constraints imposed on the state’s budget, the power lines had been laid overground.

Further, the staff of the state fire brigade was slashed in 2014 by 30%. The effectiveness of the remaining staff was also compromised due to lack of protective clothing and faulty breathing apparatus. Already operating on a small budget, 700 of the firefighters, payrolled on the state budget, have been assigned to provide their services to the 14 airports that have, under the privatization drive, been handed over to a German company.  .

Privatization and the pressure to carry out what comes along with the austerity package imposed by the IMF and EU have curtailed the ability of the state to respond to the emergency in multiple ways.

The privatization of the water industry has left pumping stations and storage tanks underfed in rural areas. “Eyewitnesses say they saw sparks flying from a faulty electricity pylon” in the town of Kineta where the fire first broke out, according to Morning Star’s report. Prior to the privatization of the national grid, the electricity workers union, opposing the move, had warned that the cost-cutting practices of private corporations in pursuit of profit would lead to a reduction in the money spent on maintenance, thus resulting in a higher risk of fires.

Referring to “the enclosure of the coast around seaside villas for the purposes of illegally privatising the beach”, Yanis Varoufakis wrote, “Many died or were badly injured flailing against the barbed wire the rich had put in their way as they struggled to get to the sea.”

In 2007, before the Greek’s state capabilities were diluted by austerity, wildfires that broke out in the same season had lasted for almost four months, burning down a total area of 670,000 acres, reducing thousands of homes to ashes. Yet, the death toll in the four months-long fire was 84, including that of fire-fighters. In a matter of a week, the fires this year had claimed at least 91 lives.

Reminding people that the damage done to the country by austerity policies go far beyond the spectacle of a burning Greece which caught the eye of the media across the world,  Varoufakis added: “For a decade we have been losing many more people to the tragedy caused by the EU establishment than to any flood or forest fire. The number of suicides rose sharply immediately after the introduction of new austerity measures in 2011, while more than 1[million] have emigrated because of the economic depression the EU has imposed on Greece.”

Having imposed this plight on the people of Greece, the European Commission tweeted on July 25 , “We stand with the Greek people in solidarity at this difficult time.. Our condolences to the families and friends of the victims of these devastating fires that have caused so much suffering”, and flew its flag in Brussels at half mast as a tribute those who were killed.