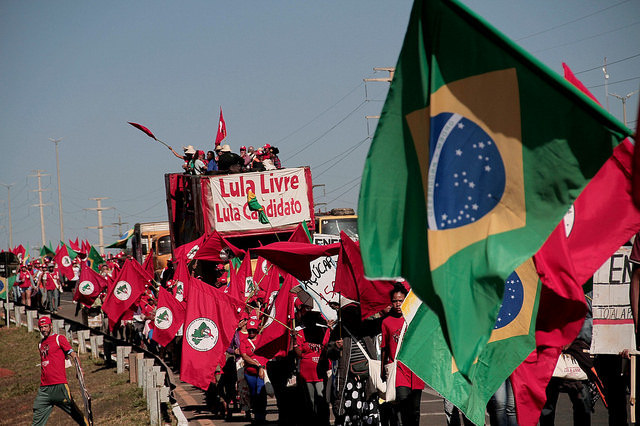 The columns set off on this Tuesday at around 6:30 a.m. to meet in Brasília at approximately 10 a.m. local time / Júlia Dolce

After marching more than 50 kilometers (more than 30 miles), the nearly 5,000 activists from people’s movements taking part in the Free Lula March are finally coming together this Tuesday in the central area of Brasília, known as the Pilot Plan.

The march started on August 10th with three different columns setting off from the cities of Formosa, Goiás; Luziânia, Goiás; and Engenho das Lages, Federal District.

Each of the columns started marching around 6:30 this morning and met in the Pilot Plan around 10 a.m. local time.

Marco Baratto, from the national board of the Landless Workers’ Movement (MST), said this is a historic demonstration for the rural workers’ organization.

“This is a big moment, because it will consolidate a process of starting over a conversation with society, and our march plays this role,” he said.

The activists have three main banners representing some of their key demands.

“Each column is taking this symbology to our meeting in Brasília so that we can build this process broadly with the people,” the MST leader said.

The Free Lula March and other people’s movements and organizations are going to register Brazilian ex-president Luiz Inácio Lula da Silva as a presidential candidate with the electoral court this Wednesday.