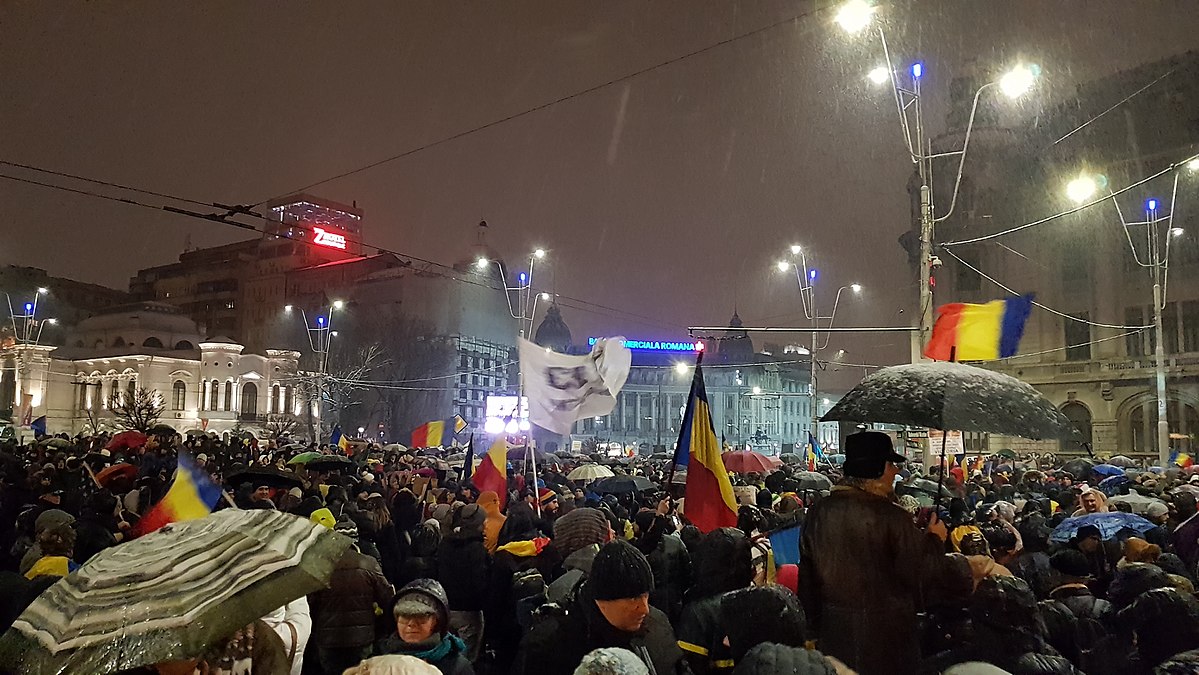 A protest in January 2018 against the proposed laws: Photo: Babu/Wikipedia

The European Union has now been called on by the European Parliament’s green group to initiate the rule-of-mechanism – which allows for imposition of sanctions – against Romania. This is in order to penalize the government for passing reforms to the anti-corruption laws, which has made it difficult to investigate politicians for graft cases, find them guilty and impose penalties.

This call came a week after the brutal crackdown on the mass demonstrations against these reforms, in which about a 100,000 protesters took to streets in multiple cities, including the capital city of Bucharest. The riot police attacked the protesters with tear gas and water cannons and charged at unarmed peaceful demonstrators with batons, leaving over 400 in need of medical attention.

The country’s President Klaus Iohannis – the former leader of the center-right National Liberal Party – who has only a ceremonial position, said after the crackdown on August 10, “I firmly condemn the riot police’s brutal intervention, strongly disproportionate to the actions of the majority of people in the square. The interior ministry must explain urgently the way it handled tonight’s events.”

The demonstration was organized by Romanian expats who drove into the capital city in large numbers to join tens and thousands of their fellow citizens outside the government headquarters. The protesters waved the national and the EU flags, demanding the resignation of what they alleged was a corrupt government. “We are the people”, “No violence” – read the messages projected on the buildings around the central square, before the police crackdown began.

Senior government officials questioned the motives of the expats who came to the country for the demonstration. Roughly a quarter of the country’s population live and work outside, and the money they send back to their families is a crucial lifeline for the rural communities of this least developed country in the EU, where the average monthly wage is as low as 520 euros.

The country has been rocked by mass protests since the beginning of last year. Soon after coming to power in December 2016, the centre-left Social Democratic Party (PSD) began trying to dilute the laws by pushing a bill in parliament which decriminalized several acts of corruption. The bill proposed regarding graft cases involving less than 200,000 euros as a non-criminal offense. Further, it also sought to abolish laws meant to stop politicians from accepting bribes on behalf of others.

While the ostensible reason given by the new government for pushing such a reform was to reduce the overcrowding of prisons, opponents cried foul as they feared that the bill, if passed, would have resulted in the end of the trial against the party leader Liviu Dragnea, who then stood accused of abusing power by procuring state salaries of two people by making fictional appointments as PSD secretaries in the General Direction of Social Assistance and Child Protection (DGASPC) Teleorman. He was convicted in June this year, and sentenced to three and a half years imprisonment. He is likely to file an appeal.

Also, opponents of the bill suspected that the dozens of party officials imprisoned for corruption could be released. Between 2014 and 2016, almost 2,000 had been convicted for abuse of power, including a serving prime minister, five ministers, 16 parliamentarians and five senators. These could be reversed if the bill was passed, critics feared. While the bill was still being debated in the parliament, late in the night on January 31, 2017, the government used an emergency law to pass the amendments as a decree.

The largest mass-demonstration since the fall of communist rule

“You did it in the night, like thieves!”, chanted protesters who gathered in hundreds of thousands across several cities, in the aftermath of the decree. These were the largest demonstrations in the country since the fall of communist rule in 1989. President Iohannis, approved of the decision of the supreme council of magistrates to challenge the decree in constitutional court, saying, the “problem is that one cannot act the way the government did in a country with the rule of law, which Romania is and wants to remain.”

As hundreds of thousands continued to demonstrate, the government, within four days of passing this decree, repealed it in order to diffuse the tensions.

Nonetheless, the tensions did not diffuse. Shocked by the brazenness with which the party attempted to defend its corrupt officials, the demonstrators pressed on, demanding the government’s resignation – with as many as half a million people coming to the streets, chanting in a chorus: “Resign! Resign!”.

After 250,000 protesters stayed put in mass-demonstrations in the capital city of Bucharest, Justice Minister Florin Iordache, whose initiative the decree was, tendered his resignation. However, protests continued in demand of resignation of the entire government.

This was followed by the ousting of the Prime Minister Sorin Grindeanu by his own party, which proposed a no-confidence motion in which 244 of PSD lawmakers voted in favor, with only seven voting against. All the opposition parties abstained from voting.

The reason given by the party was the failure of the Prime Minister to see through the reforms and his conceding to the pressure by the protesters. Grindeanu termed the no-confidence motion a ploy by the party boss, Liviu Dragnea, who could not assume Prime Ministership without the ending the trial against him. Dragnea, Grindeanu charged, was trying to “concentrate all the power in his hands”.

Following this, the protests gradually subsided. However, when in last December, the bill was tabled again in parliament, thousands took to the streets, with 4,000 Romanians marching from the government headquarters to parliament, outside which they chanted “Thieves’ nest” and “We want justice, not corruption”.

Nevertheless, despite pressure on the lawmakers to refrain from passing the bill, the PSD-dominated parliament voted in favor of the reform on December 19 last year. Popular outrage, which had begun during the parliamentary discussions, reached a crescendo when the amendments were proposed.

These proposed amendments required the presence of the suspects while the victim was being heard in the court, which could have led to the intimidation of the victim. Searching of houses for evidence collection would have been carried out only after notifying the suspects, which would give them time for destruction of evidence. Further, the proposed amendments sought to bar the use of video footage in investigations and to end the provision for investigative custody of those suspected in corruption cases.

By January 21, 100,000 protesters had flocked the streets in mass-demonstrations in numerous towns and cities across the country, with about 60,000 gathering in the capital city outside the palace of the Nicolae Ceausescu, the former authoritarian leader.  .

Following these mobilizations, in February, the president, calling the bill and proposed reforms an “an assault against the justice system”, said in a televised address that the laws approved by the parliament in December “do not conform to the national constitutional framework nor to the relevant European standards. This is why I’ve decided to send them to the Constitutional Court and to refer the matter to the Venice Commission,” which is a legal advisory body of the Council of Europe.

Sacking of the anti-corruption crusader

Further intensifying the protests, on the February 24, the Justice Minister had called for the dismissal of the head of the country’s top anti-corruption agency, Laura Kovesi, on the grounds that she exceeded her authority and disrespected the parliament by, among other things, launching an investigation into the government’s use of an emergency law to pass the decree which was overturned after mass protests.

Kovesi – whose work has successfully penalized high-profile politicians involved in corruption cases and has been widely appreciated both by Romanians and by the EU – was also involved in the then ongoing investigation against Dragnea.

Thousands took the streets again in multiple cities and towns against the call to dismiss her, with 4,000 protesting in freezing sub-zero temperatures in the capital, blowing whistles and shouting, “You won’t get away with it!”. An online petition signed by 108,000 people was submitted to the president asking him to not dismiss Kovesi.

Finally, early in the month of April, the president rejected the justice minister’s call for her dismissal, saying in a public statement, “The reasons for dismissal presented by the justice minister didn’t convince me — in large part, because they are not in line with the laws applicable here.”

However, by the end of May, the constitutional court ruled that the president had no discretionary power to decide whether or not to implement the justice minister’s call, and forced the president to dismiss her. In a statement, the court said, “The president has refused to issue the dismissal decree.. which has blocked the justice minister from using his authority related to the prosecutors’ activities.. The constitutional conduct that must be followed is for the president to issue the dismissal decree.”

Breaking the back of investigating agencies

The following month, the parliament passed a set of laws which further diluted the efficiency with which corruption could be tackled. These laws are part of the handbook on the new penal code approved by the parliament, according to which wiretapped evidence procured without direct relation to the crime under investigation could not be used in court.

Further, a suspect, once declared innocent by a lower court, could not be tried in a higher court unless new evidence, not previously examined, was provided. This would make it impossible to challenge the conclusion drawn by the lower court based on the evidence already placed before it.

While most corruption cases in Romania have required years of investigation before any charges can be pressed, the new laws limited the time for pressing charges for a period of one year, after which, if charges are not pressed by the prosecutor, the investigation could be dropped.

In the aftermath of these developments, clashes were reported between police and protesters who intended to block traffic on the street beside the Victory Square in Bucharest. Eight people were detained by the police for questioning, including a German journalist who was carrying camera and press-card. The detained journalist was documenting the story of party-head, Liviu Dragnea.

The following month, the president, in accordance with the constitutional court’s order, issued the decree to dismiss the anti-corruption crusader and chief prosecutor of DNA, Kovesi. The scale of protests picked up again, culminating in the mass demonstrations last week.

The EU has kept Romania, which is among the most corrupt countries in the union, under special scrutiny since the country’s accession into EU in 2007. However, throughout the turbulence over last year, the EU has merely been stating that it is observing the situation with “concern”.

It appears, for now, that it is up to the Romanians to defend the country’s justice system from from assaults by a government that is hell-bent on defending its corrupt officials by diluting the anti-corruption laws and weakening the investigative bodies.