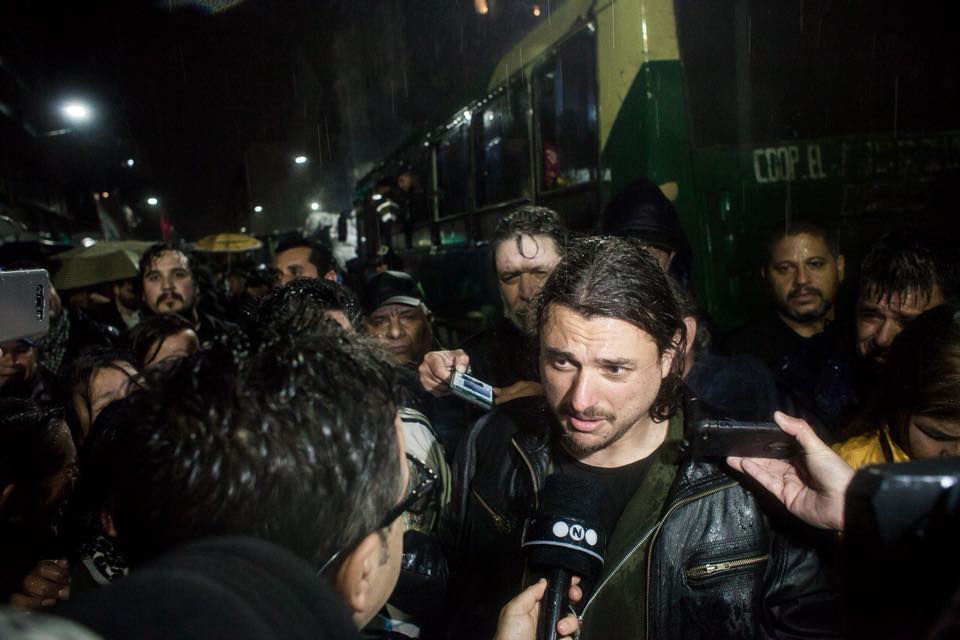 Buenos Aires police authorities arbitrarily arrested a group of Senegalese street vendors, one of the most precarious and marginalized groups of people in Argentina. When prominent social and political leaders from CTEP and MTE mobilized to demand their release and defend them against violence and repression, they were also taken into custody. In response to this violent episode, a mobilization was convened immediately and thanks to the social pressure, the arrested workers and social activists were released at midnight.

The arrests were made while a peaceful protest was being carried out demanding the freedom of Alejandro Valenzuela (representative of Vientos de Libertad), Gastón Reyes (representative of the MTE-La Matanza) and six street vendors of Senegalese community who had been imprisoned in the afternoon. The trade union organization has denounced the policy of persecution of street vendors, who, are not only arrested, but their goods are also seized leaving them without means to continue working.

The leaders approached with some 40 people to express their support and, in case of Grabois, to constitute himself as an advocate of the detainees.

According to the social activists who were present at the protest, 20 minutes after the demonstration began, the police of Buenos Aires city deployed a large operation that had around 400 troops, who violently repressed and assaulted the protestors with rubber bullets and pepper spray. They also claim that the size of operation did not correspond to the number of protestors and they claim that the arrests of the leaders was selective. This proves that the government of Mauricio Macri has deepened a policy of repression in response to the demands of people’s sectors, while increasing in their speeches messages of hatred and criminalization to those who represent these struggles and social movements.

The news created an echo at national and international level instantly, that is why, in addition to mass concentration in front of the police station, 18 rallies were held in different provinces demanding the release of the representatives. At the doors of the police station, MTE and CTEP activists gathered and one could also see a wide range of Argentine political leaders, such as Juan Carlos Schmid (CGT) [General Confederation of Labor], Leonardo Grosso (representative of Evita Movement), Gabriela Cerruti and Horacio Pietragalla (representatives of Unidad Ciudadana), Gabriel Solano (Buenos Aires legislator of Frente de Izquierda), Claudio Lozano (representative of Unión Patriótica), among others.

While they were detained, a video was leaked in which Grabois warned that “the level of arbitrariness of the government of our country has reached an intolerable degree” and explained the framework in which the arrests were made, stating that “a group of young people came to defend the street workers, the hawkers who are trying to earn a living from their own work, from their own efforts in a context of a terrible economic crisis”. In turn, he denounced that they were beaten, insulted and abused for their “political and organizational affiliation”, according to his words. Finally, calling on society he said, “so we ask the people to make their repudiation heard, of these acts of intimidation that occur in the context of the delivery of our country to the IMF, the plundering of our resources, the hunger and the misery of the majority of people”.

At around 22:00 hours, the news broke that the detainees would be released, but this was made effective near midnight. When released, Jaquelina Flores reported being mistreated and beaten in her vagina and, also said: “we came to defend the comrades who were imprisoned by the corrupt police, because they refused to pay bribes”. Jaquelina declared that they would not leave until all the detainees were released and reiterated: “they know that the police are corrupt, so they want to silence us and therefore they imprison our comrades”.

After being released, Grabois expressed his gratitude acknowledging that his release had been through people’s mobilization. He also expressed his desire that the sectors that congregated could express unity in addressing the adjustment policies of the Cambiemos government.

It is worth mentioning that after the struggle for the release of the detainees and the representatives, the people’s movements grouped in/incorporated with the CTEP, Barrios de Pie and the CCC, carried out a mass mobilization with the slogan “Fuera el FMI, Basta de Hambre” [Get out IMF, Enough of Hunger]. The mobilization that began from the Monumento Canto al Tranbajo was addressed to the Argentine Energy Secretariat to demand “tarifa social” or subsidized rate on public services for all the neighborhoods included in the national survey of people’s neighborhoods and for the workers of the Popular Economy; removal of interests and penalties on the accumulated debt and 50% subsidy for recovered factories, clubs, development societies and cooperatives; increase in the consumption limit for the tarifa social; and end of power cutoffs due to nonpayment.

In different parts of the country, actions were taken to express a unified claim and demand an urgent response to the profound social and economic crisis generated by the economic policies implemented by the government itself.