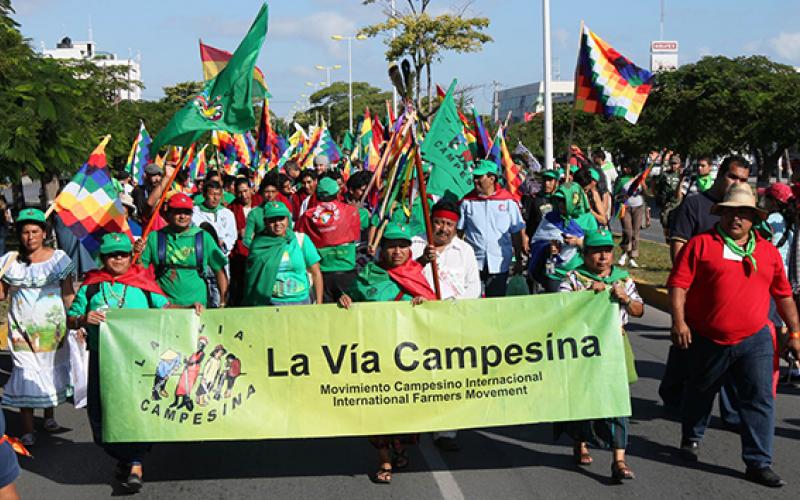 Peasants will be able to approach courts using the provisions of the declaration if it is adopted.

After almost two decades of ceaseless peasant struggles across the world, coordinated by global movements such as the Via Campesina (the peasant way), the United Nations Human Rights Council (UNHRC) finally adopted the United Nations Declaration on the Rights of Peasants and Other People Working in Rural Areas on September 28.

If adopted by a final vote by UN member states next month, this will be an unprecedented recognition of peasant rights in international law, using which organized farmers, agricultural laborers, cattle rearers, and even hunter gatherers can legally challenge agricultural policies, as well as the broader policy directions such as austerity and ‘free-trade’.

For decades now, states across the world have been pursuing neoliberal economic policies, as a result of which the peasantry has been suffering a continuous squeeze on their real-incomes. They have been dispossessed of their land and access to natural resources, disenfranchised from the seed breeding and food production processes, and targeted with violence when they resist in an organized manner.

“The violations of peasants’ rights are on the rise because of the implementation of neoliberal policies promoted by the World Trade Organisation, Free Trade Agreements (FTAs), other institutions and many governments in the North as well as in the South. The WTO and FTAs force the opening of markets and prevent countries from protecting and supporting their domestic agriculture. They push.. the deregulation in the agriculture sector,” the Via Campesina stated in its 2008 Declaration of Rights of Peasants – Women and Men, which was placed before the Human Rights Council the same year.

Without naming policies or institutions, the UNHRC’s declaration nevertheless acknowledges this attrition suffered by the class which comprises almost half the world’s population, and concedes to them all the rights demanded by the Via Campesina in its declaration.

Some of these include the right to organize and freedom from violent suppression, the right to breed and exchange seeds, the right to influence national policies that affect peasants, as well as the right to choose what is to be grown and by what methods. The declaration, once in force as a law, will strengthen the peasantry’s ability to resist such policies by leveraging international law in appropriate courts.

This declaration, after being placed before the 3rd Committee session at the UN General Assembly this month, will be voted on in November. “Once adopted, the UN Declaration will become a powerful tool for peasants and other people working in rural areas to seek justice and favourable national policies around food, agriculture, seeds and land keeping in mind the interests of millions of rural food producers comprising all genders and youth,” the Via Campesina said in a statement.

However, the support of the developing countries helped carry the motion with 33 votes in favor, 11 abstentions and 3 against.

The resistance to the adoption of this declaration by most developed countries is understandable, as the rights stipulated in it will directly affect the profits of transnational corporations, most of which are based in these countries.

The declaration states peasants shall have the “Right to save, use, exchange and sell their farm-saved seed or propagating material,” adding, “States shall recognize the rights of peasants to rely either on their own seeds or on other locally available seeds of their choice, and to decide on the crops and species that they wish to grow.”

Further, the declaration also makes it an obligation on the state to actively “support peasant seed systems, and promote the use of peasant seeds and agrobiodiversity”. This will directly affect the profits of many giants like Germany-based Bayer, which has now acquired Monsanto. The profit strategy of companies like these includes lobbying states, especially in Africa and South Asia, to confer intellectual property rights on its genetically-modified seeds . This enables these corporates to criminalize breeding and exchange of seeds by farmers, leaving them dependent on the firms for the most basic necessity for farming.

A major source of accumulation of wealth for numerous large manufacturing industries, predominantly based in developed countries, has been the grabbing of land, water and other resources from the peasants in developing countries, using state-sanction.

The declaration seeks to protect peasants from what academics call accumulation by dispossession. It states, “Peasants and other people working in rural areas have the right to be protected against arbitrary and unlawful displacement from their land or place of habitual residence, or from other natural resources used in their activities and necessary for the enjoyment of adequate living conditions.”

In order safeguard this right, “States shall incorporate protections against displacement into domestic legislation…. States shall prohibit arbitrary and unlawful forced eviction, the destruction of agricultural areas and the confiscation or expropriation of land and other natural resources.”

By asserting that “Peasants and other people working in rural areas have the right to determine and develop priorities and strategies,” the declaration seeks to limit the influence that Western states, armed with IMF and World Bank policies, have had in shaping the national development policies.

By deeming “adequate standard of living”, basic income security, access to health and to “means of production.. including production tools, technical assistance, credit, insurance and other financial services” as a “right” of the peasantry, the declaration obliges states to undertake large-scale public expenditure, directly contradicting the IMF’s neoliberal diktat of austerity.

The declaration mandates that, “before adopting and implementing legislation and policies, international agreements and other decision-making processes that may affect the rights of peasants and other people working in rural areas, States shall consult and cooperate in good faith with peasants.. through their own representative institutions.. and [respond] to their contributions.” This can prove key in the resistance to free trade agreements.

Further, by stipulating agrarian reforms to reduce land concentration, the declaration has adopted a radical language, a victory for those who have been campaigning for such a measure for years. “This has been a long tough path but as peasants, as people who have seen the worst of poverty and neglect, we are tough too and we never give up”, Elizabeth Mpofu, the General Coordinator of La Via Campesina said.

“Once the resolution is adopted at the UN General Assembly in New York, we will take the message of the Declaration to our people back home, and elaborate its significance and how it could strengthen our struggles against privatization, criminalization and more. ..It will enable us to demand better policies and laws that will take into account the rural realities of the developing world” said Henry Saragih, the chairperson of the Indonesian Peasant Union.