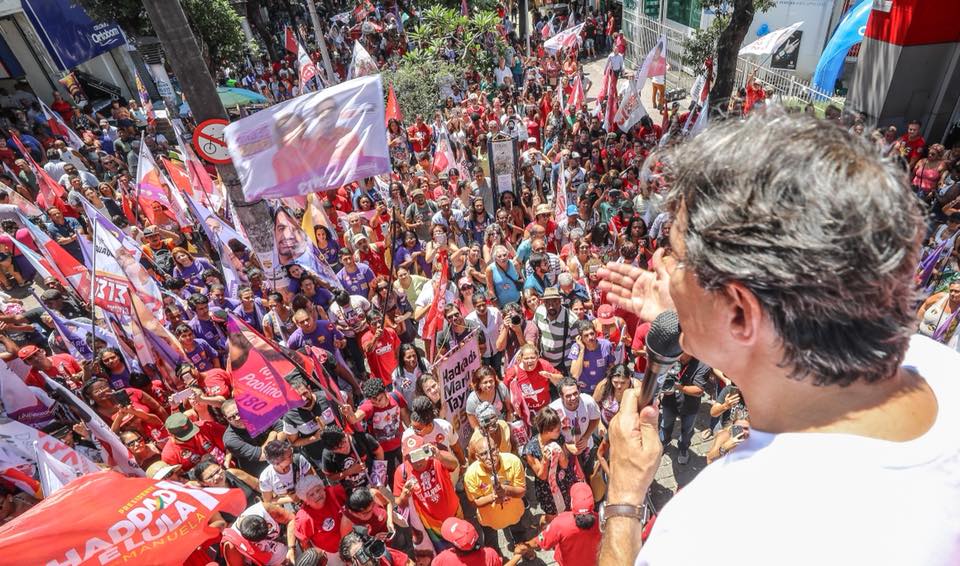 The elections on October 7 mark a watershed moment for the people of Brazil and Latin America as a whole. The country is still healing from the social trauma inflicted by centuries of colonial rule and decades of military dictatorships. Many of these enduring legacies will have a direct outcome on the electoral landscape.

The choices of the nearly 147 million eligible voters will have massive implications on the domestic, regional and international political and economic landscape.

Elections will be held for:

It is clear that in the run-up to the elections, the Brazilian Workers’ Party (PT) has enjoyed continued support among the country’s social movements. Throughout the campaign, the PT and their iconic political leader Lula da Silva have received public endorsements from various sections of the Brazilian labor movement, academic community, landless peasant organizations and urban activist groups. Even after Fernando Haddad took up the mantle of candidature following repeated rejections of Lula’s bid to contest, the election campaign has been as much about struggling against the injustice meted out to Lula.

Yet, with less than a day  to go for the elections in what has been nothing short of a dramatic campaign season, the outcome remains highly uncertain.

What the polls say

The poll found that Bolsonaro captured 35% of support voter intentions, while Haddad was at 22%.

A second-round vote on October 28 is likely, as all recent polls indicate no candidate will win more than 50% of vote in the first round.

However, participation in the election may be affected by voter disenchantment. This is fuelled by the political disenfranchisement of the masses due to a deficit of genuine democratic institutions that could allow citizens to be part of political transformation.

Voting is compulsory, but at least 11% of voters have indicated they plan to vote null or blank — the highest figure in 16 years.

Many feel that only a privileged minority in Brazil have benefitted from the country’s young, so-called ‘democratic’ political system. Brazil is a highly exclusive and divided society, along racial, class and religious lines. It is this exclusivity which partially generates conservative values and anti-establishment sentiment among voters that ultimately translates into political support for Bolsonaro.

Security: Jair Bolsonaro, a former army captain and current congressional deputy, has placed public security as a focal point of his agenda. He maintains close ties with the country’s state security force, which is known for repeated cases of excessive use of force.

Similarly, Bolsonaro proposes alarming solutions to stem violence in the country, which in 2016 recorded a total of 62,517 homicides. He has asserted that “a policeman who doesn’t kill isn’t a policeman” and wants to reduce the age of criminal responsibility to 14.

To make matters worse, one of Bolsonaro’s most infamous campaign pledges is to allow the entire Brazilian population the right to gun ownership, which would involve the partial dismantling of the country’s Disarmament Act.

Economy: If elected, Bolsonaro is likely to continue pursuing the highly regressive socio-economic policies implemented under the current administration of Michel Temer.

Temer, whose approval ratings hover just above 5%, has signed several legislative measures that have led to the privatization of public assets, cuts to social welfare programs, and the erosion of worker rights. This is an explicit assault on working class Brazilians.

During his campaign, Bolsonaro vowed to privatize “some” of Brazil’s more than 140 state-operated enterprises.

Equally worrisome is the fact that one of his key economic advisors, Paulo Guedes, is a graduate of the University of Chicago’s economics department. Since then, he has been involved in a variety of dubious activities, including serving as an executive at an education investment firm and as a hedge fund manager.

All of these things, combined with vaguely articulated proposals to reduce corporate tax policies, have already endeared him to the financial sector and external markets.

Constitutional amendments: Earlier this year, Bolsonaro announced that if elected, he would modify the constitution, increasing the number of Supreme Court Justices from 11 to 21. Such a move would effectively grant him the unilateral authority to nominate at least 10 judges and significantly influence judicial outcomes.

Who is voting for Bolsonaro and why?

Bolsonaro has the support of several groups, including Brazil’s conservative evangelical sector, which comprises 25% of the population

During the campaign, Bolsonaro has repeatedly emphasized the importance of religious faith as a political tool to capture Brazil’s growing and important evangelical electorate bloc. Over 20% of the country’s federal lawmakers represent the evangelical bloc.

Another important reason for Bolsonaro’s popularity is his unapologetic endorsement of conservative values. These include his stance against abortion, as well his invoking of homophobia, racism and misogyny, according to an electoral report authored by Esther Solano and financed by the Friederich Ebert Foundation.

This polarizing rhetoric has resonated with a second set of voters, who embrace Bolsonaro’s apparent ‘sincerity’ and ‘honesty’, the study revealed

In 2011, Bolsonaro told Playboy magazine that he would be “incapable of loving a gay son” and that he would prefer to see such a son “die in an accident”. Four years later, he was fined for saying in a newspaper interview that congresswoman Maria do Rosario was “not worth raping; she is very ugly”. Earlier this year, he faced legal charges stemming from racist remarks he made about Afro-Brazilians.

The fact that these shocking comments are perceived as ‘refreshingly honest’ highlights the extreme levels of polarization. It is in this sense that the situation in Brazil resembles that of a number of countries – from the Philippines to Turkey – where the far-right has advanced, capitalizing on social divisions and resentment.

Regardless of the outcome of Sunday’s elections, these recent and alarming political trends warrant deep and honest reflection both in Brazil and around the world.