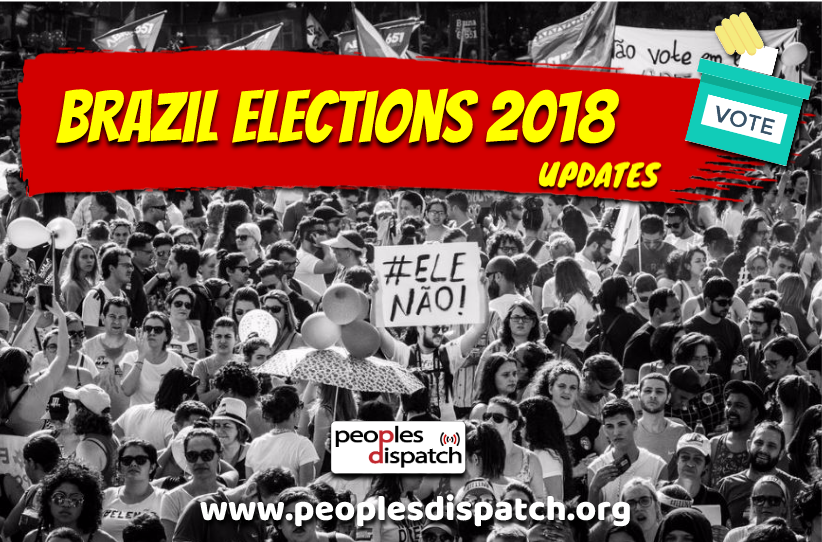 Polling began in Brazil at 9 am on October 7 in one of the most significant elections in recent times. The candidate leading the fray in Jair Bolsonaro, a former army captain and unabashed supporter of the military dictatorship that saw the deaths of thousands. Through the campaign trail and before, his misogynist, racist and homophobic comments have led to many comparing him to Donald Trump and his victory could see dark times ahead for Brazil.

The most significant absence in this election is that of former president Lula, who until his candidature was rejected, was the favorite to win the polls. The elections are the first after the constitutional coup of 2016 that saw the overthrow of president Dilma Rouseff. Fernando Haddad of the Workers’ Party (PT) was chosen as the candidate after Lula was declared ineligible and has emerged as the main challenger to Bolsonaro.

To read more about the issues at stake, here’s a primer on the elections.

Read about why indigenous communities have taken a strong stand against Bolsonaro.

Here’s a round-up on the campaign over the past few weeks, and a video on why hundreds and thousands of women took to the streets in Brazil on September against Bolsonaro.

At People’s Dispatch, with the help of our friends and comrades in Brazil and other countries, we aim to bring you regular updates over the coming hours. All reports are in Brazilian local time.

? Regular Updates on the Elections:

11 PM: Results from the gubernatorial elections have also arrived. While 13 provinces saw outright victors in the first round, another 14 will go for a second round of polls on October 28. PT candidates won in the provinces of Bahia, Ceara and Piaui.

With 99% of the votes counted in the presidential elections, Bolsonaro won 46.03% of the vote and Fernando Haddad won 29.28%. The two candidates will face off in the second round of elections on October 28.

Meanwhile, battle lines are already being drawn for the second round of presidential polls. Guilherme Boulos who contested on the  Socialism and Liberty Party ticket declared his support for Fernando Haddad while  Ciro Gomes of the Democratic Labor Party, who came third announced that he would not support Bolsonaro.

9.58PM: Speaking to reporters and tweeting after narrowly preventing Jair Bolsonaro from obtaining a first-round victory, PT candidate Fernando Haddad said that the campaign for the next election would begin tomorrow and it would seek to unite Brazil. “Let us defend Brazil and its people, especially the poorest people. I have always been on the side of freedom and democracy. I will not give up my values,” he said. He said he had already spoken to some of the other candidates, Ciro Gomes, Guilherme Boulos and Marina Silva, and called for keeping the door open for dialogue. He nonetheless added that the second round gave the opportunity to directly take on the extreme right through debate and argument. 6.05 PM: Polling booths have begun to close in a number of areas. Counting has begun province by province and for various parliamentary seats. The counting of votes for the presidential elections will begin at 7 p.m. after the polls formally close.

Elections are also being held for 513 seats in the lower house of parliament and two-thirds (54) of the 81 seats in the Senate.

Earlier in the day, PT candidate Fernando Haddad warned against a Bolosonaro presidency. “Brazil is running a huge risk of losing the important achievements of the last 30 years,” he said.

The 2018 elections are happening on the 30th anniversary (October 5) of the promulgation of the current constitution in 1988 after the end of military dictatorship. The military regime ruled the country from 1964 to 1985, leading to horrific crimes against people and killing thousands. Right-wing presidential candidate and former military officer Jair Bolsonaro claimed that the ‘military rule was a good thing’, sparking of a controversy, with many considering his policies as pushing back the country to a regressive military state.

“Everything shows that the center-right was taken over by neofascism. In practice, the PT, PSOL and PDT resist Bolsonaro. The rest do not have the capacity as parties to resist Bolsonaro,” Breno Altman journalist and founder of OperaMundi, told Radio BdF.

“These groups [sections of the ruling class] are stuck in a contradiction: they defend an agenda that the majority of the population rejects, like cutting back on rights and reduction of the role of the state,” he added.

“ When Dilma Rousseff was elected in 2014, a group was created to take her down. The anti-Workers Party sentiment was created, hate, and the manipulation of anti-corruption discourse. The extreme-right was empowered by this climate of hate, that went out of control from the traditional parties.”

3.30 PM: Polling continued in the elections in Brazil. So far, no serious irregularities have been reported.

Images of votes cast in some of the 99 countries where Brazilians are exercising their franchise have been circulating on social media. Any authoritative numbers and that the results of the elections held in other countries will only be announced after the counting.

Also circulating on social media are images of alleged Jair Bolsonaro supporters carrying guns to election booths and taking pictures with them after voting. While the Brazilian election authorities have not confirmed this, these images have to led to concern among many Brazilians. One of Bolsonaro’s controversial proposals involves giving all Brazilians the right to own guns, which would require changes to the country’s Disarmament Act.

In an interview with Radio Brasil de Fato, Raimundo Bonfim, national coordinator of the Platform of People’s Movements, noted the high level of violence practiced by followers of the extreme right-wing candidate, Jair Bolsonaro. “We are seeing one of the most violent campaigns in the history of our country. Not even in 1989, the first elections after re-democratization, did we see barbarities like those that we are seeing in these elections.”

Bonfim commented on the projections about the second round in the elections, “It is more than an electoral process. It is a political dispute about what project we want for the country. As of tomorrow, we have to try and create a great alliance, not only from the left, but with the liberal democrats, all those who defend democracy, to impede barbarity, against fascism, in defense of democracy, and in broad dialogue with the people”.

11:23 am: Prominent candidates, including Fernando Haddad, his vice-presidential candidate Manuela d’Avila, Jair Bolsonaro and Guilherme Boulos, as well as former president Dilma Rousseff were among those who cast their votes early in the day.

In the run-up to the polls, activists noted the free flow of fake news in social media, much of which targeted PT presidential candidate Fernando Haddad. The Supreme Electoral Tribunal (TSE) of Brazil asked Facebook to remove fake content relating to Haddad’s proposal to distribute feeding bottles to the children in nurseries in the country. Tribunal observed that “the publication has the clear intention of distorting the conceptions of the representative candidate, disseminating manifestly untrue information about their performance before daycare centers”.

The organizers of the #EleNao (not him) campaign against Bolsonaro also pointed out how massive misinformation was circulated regarding their protests in various cities on October 6. However, this did not stop thousands of people, mainly women and children, from marching against the fascist agenda of Bolsonaro.