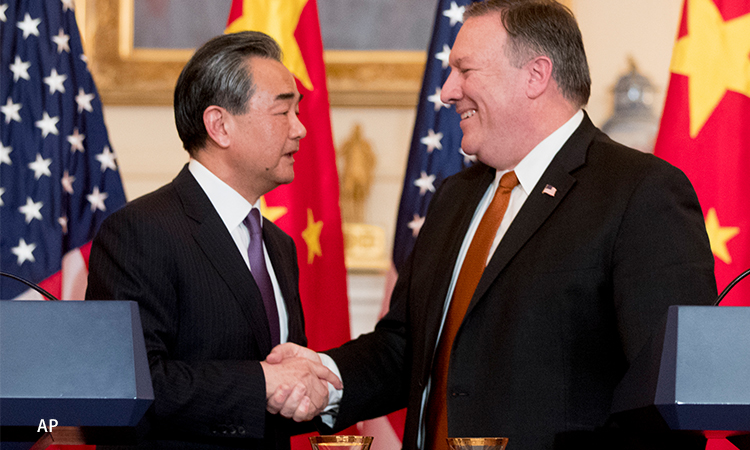 The interactions came on the heels of intensifying trade wars and military maneuvers on the South China Sea between the two countries. Photo: Chinese Embassy

Tense exchanges took place between the US State Secretary, Mike Pompeo, and the Chinese Foreign Minister, Wang Yi, during the former’s visit to Beijing earlier this week. The interactions came on the heels of intensifying trade wars and military maneuvers on the South China Sea between the two countries, following which the high level diplomatic and security talks scheduled for the middle of the month were cancelled.

The meet came two days after Pompeo’s visit to Pyongyang where he met North Korean leader Kim Jong-un, and the two agreed to schedule a second summit between Kim and US president Donald Trump. Pompeo had had hoped to press China, North Korea’s closest ally and trade partner, to push the country towards quicker denuclearization.

However, given the recent tensions, other issues between the two countries became the bone of contention. The Chinese diplomats who met Pompeo told him that China would take all the necessary measures to guard its sovereignty. They were referring to the sale of American arms to the island of Taiwan – where the erstwhile nationalist leadership of China had fled in late 1949 after losing the civil war. China regards Taiwan as its province. Foreign Minister Wang also urged the US to abide by the one-China principle and end military ties and arms sale to Taiwan.

Blaming the US for starting the trade war, Wang said China was ready to resolve the dispute through negotiations, but only if those negotiations were based on “equality, integrity and seriousness,” the People’s Daily reported.

“These actions have damaged our mutual trust, cast a shadow over China-U.S. relations, and are completely out of line with the interests of our two peoples,” Wang told Pompeo, who in turn said, “The issues that you characterized, we have a fundamental disagreement,” adding, “We have great concerns about actions that China has taken and I look forward to having the opportunity to discuss each of those today because this is an incredibly important relationship.”

These exchanges, unusual for such diplomatic occasions, along with the fact that Chinese President Xi Jinping did not meet Pompeo, indicates a worsening relationship between the two largest economies in the world. The meeting seems to have done little ease the tensions. There was no joint statement made by Pompeo and Wang after the conclusion of the meeting.

“The confrontational approach that the Trump administration has taken is far more likely to cause China to dig in than to give in.. It will reduce the likelihood that the Chinese will make common cause over North Korea policy,” vice-president of Asia Society Policy Institute, Danny Russels reportedly said.

Less than three months ago, the US complained that China and Russia had violated sanctions by exporting to North Korea oil in excess of what was permissible. When asked after Monday’s meeting if he still counted on China to cooperate with the US in maintaining pressure on North Korea by abiding with the international sanctions, Pompeo only replied, “Sanctions remain an important part of the overall campaign to bring North Korea to the negotiating table.”

Days before the visit of Pompeo to the North, even South Korea, on whose behalf the sanctions are ostensibly imposed, asked for an exemption from them in order to be able to pursue economic projects jointly with the North. Recently, North Korean vice-foreign Minister Choe Son was in Beijing. Russia has also confirmed that planning is underway to set up a meeting with Kim in Moscow. Should an understanding between Russia, China and the divided Koreas be cemented, it is bound to be a major blow to the American influence in the region.

Earlier, Pompeo’s visit to North Korea saw a thaw in the relationship between the countries after a number of hostile statements, especially by the US. Kim, Trump and Pompeo expressed happiness with the talks. Kim also offered to allow international inspectors to examine the Punggye-ri nuclear test site which had been blow up. But besides that, US hopes that they could take forward the discussion on denuclearization alone were not realized. North Korea has made it clear that any progress on denuclearization has to be accompanied by concrete US steps to end the war that is still technically on. Meanwhile, it is the process between the Koreas that is progressing at a fast rate, especially after the three summits in April, May and September. South Korean president Moon Jae-in is especially pushing for a economic corridor involving both the countries.