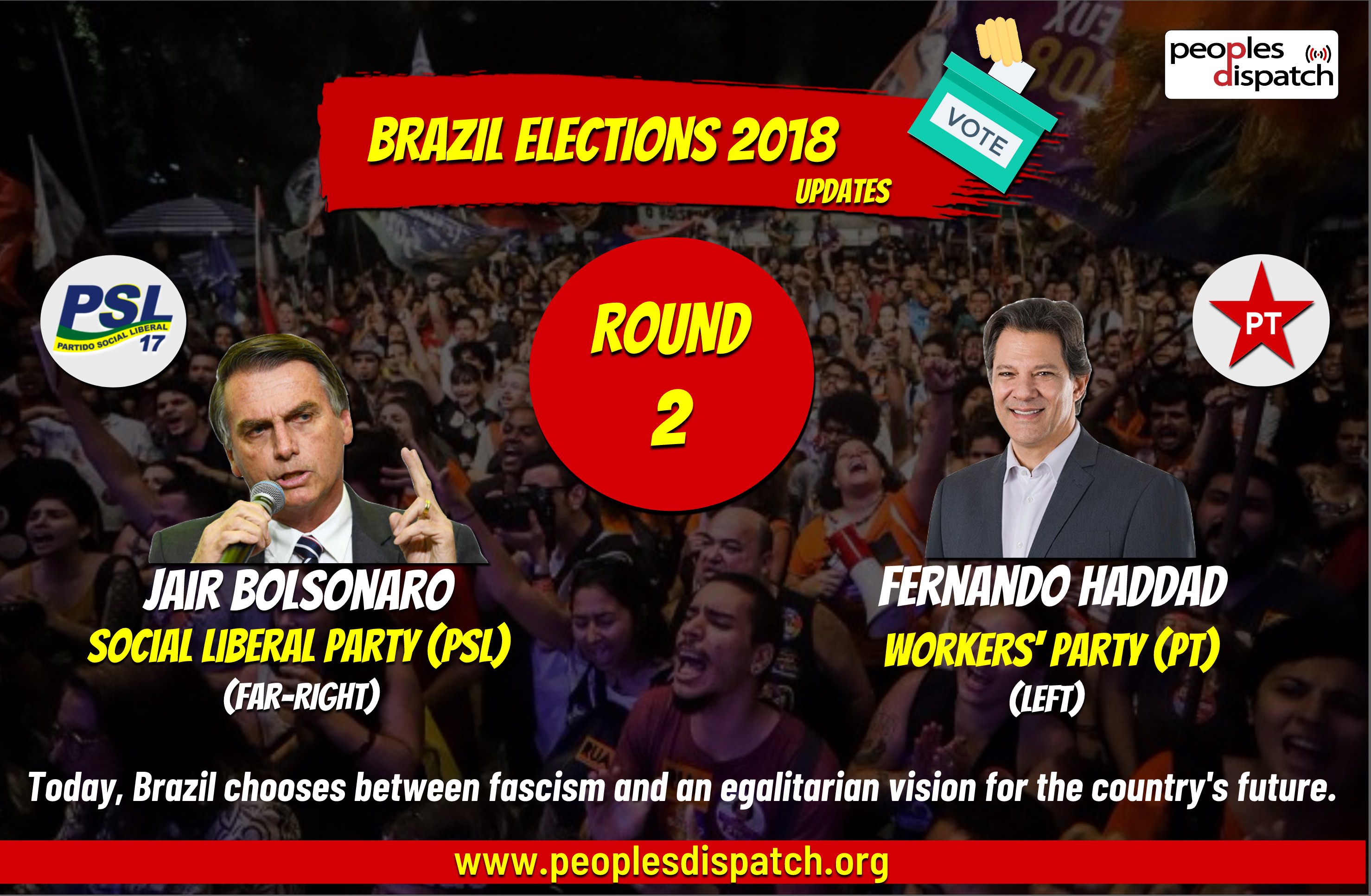 Today, Brazil chooses between fascism and an egalitarian avision for the country's future

Today, on October 28, Brazil is going to choose between two contending visions- one a fascist and authoritarian and another pro-people and egalitarian. This time the fight is between the ultra-right wing candidate of Social Liberal Party (PSL), Jair Bolsonaro and left-wing candidate of Workers Party (PT), Fernando Haddad. As Brazilians queue at polling stations to decide the future of their country, people in Brazil and across the world are anxiously waiting for the final results.

To read more about the first round of elections, which were held on October 7, 2018, click here.

Not only a proponent of violence and torture but Bolsonaro and his policies could also be a disaster for the environment, scientific research.

People across the globe, standing solidarity with the people of Brazil have issued an International Declaration Against Fascism, and noted – There can be no neutrality in the choice between democracy and fascism! Our video on it can be accessed here.

In the struggle against ultra-right wing candidate Bolosnaro, Brazilians from all walks of life came together, channelling the legendary anti-fascist song Bella Ciao, and vowing to fight for a just future. Watch here the video of Brazilians singing the Ele Nao (Not Him) version of Bella Ciao.

At People’s Dispatch, with the help of our friends and comrades in Brazil and other countries, we aim to bring you regular updates over the coming hours. All reports are in Brazilian local time (GMT-3).

? Regular Updates on the Elections:

5:45 PM: Voting progresses in its last stage in Brazil’s crucial elections where a university professor (Haddad) is contesting against former army officer (Bolsonaro), who is known as a supporter of torture and repression.  The counting of votes will begin after polling closes in the state of Acre, which as a two hour time difference from the capital, Brasilia. Below is a wall graffiti depicting what does the Brazil 2018 election means for the country:

According to Brazil’s Superior Electoral Court (TSE), voting has closed in 33 countries, where polling stations were opened for expat Brazilians to vote.

Peoples across Brazil are voting with books in hand following the Haddad’s call: More books and less weapons (#MaisLivrosMenosArmas)! Some are even walking into the polling centres wearing their graduation dress.

Meanwhile, yesterday night (October 27), Charlione Lessa Albuquerque, 23 years old, was shot and assassinated during a mobilization in support of the candidate Fernando Haddad, of the Workers’ Party, in the municipality Pacajus, in Ceará, in the northeast region of Brazil.

The secretary of public safety of the state confirmed the information. The militant activist had been in a car with his mom when armed men got out of a car and shot at them. Charlione is the son of Maria Regina Lessa, National Secretary of the Woman Worker in the VESTUARIO sector, affiliated to the Central Workers Union (CUT)

According to the CUT, the mobilization was carried out in a “peaceful and relaxed environment” when a supporter of ultra right-wing Jaír Bolsonaro opened fire against the victim. “After the shots, the assassin yelled the name of Bolsonaro,” informed the note.