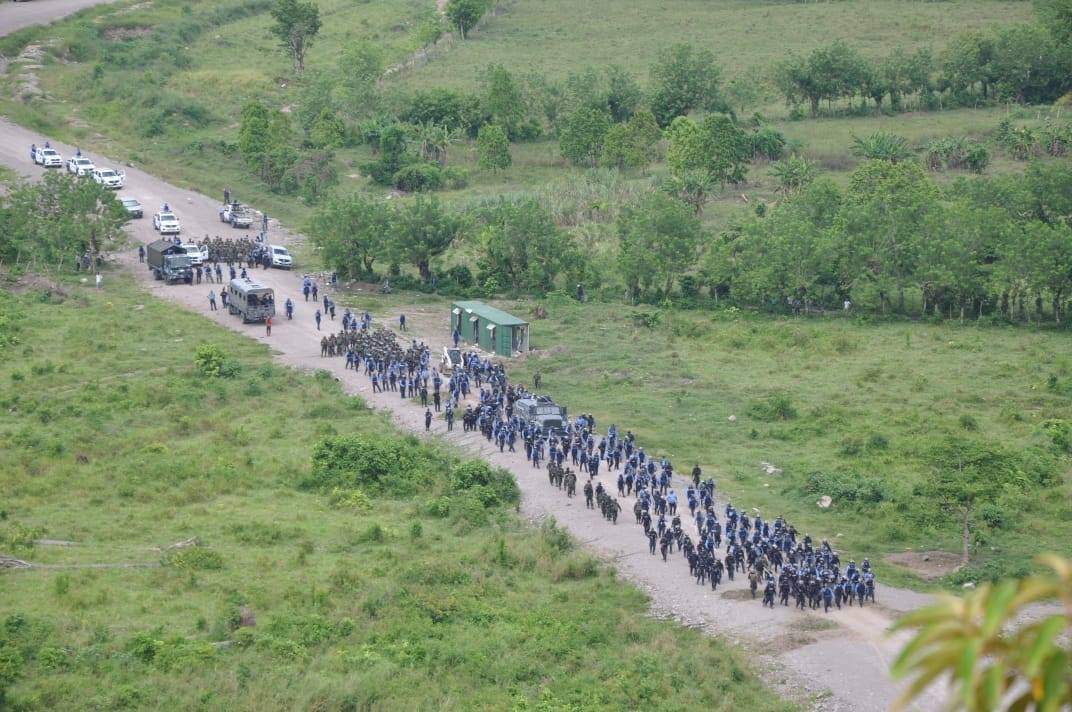 For nearly 90 days, the communities of the Tocoa municipality in the north of Honduras peacefully resisted a mining project by organizing the ‘Guapinol camp in Defense of Water and Life.’ On October 27, their camp was violently attacked by 1,500 police and military personnel with live bullets and tear gas. The repression resulted in the death of two members of the military and one community member, while dozens more were left with bullet wounds and breathing trouble due to the tear gas. Three people were also arrested. The security forces remain in the zone and human rights organization have denounced the “imminent human rights violation of the Tocoa population by police and military”. On Monday, a curfew was announced in the region and organizations reported more police arriving in the area.

Video of the repression

Community members of Tocoa began the ‘Guapinol Camp in Defense of Water and Life’ in the beginning of August on the path to the mine. The camp was established to protest the permission given to the mining company, Inversiones los Pinares, to mine iron oxide, as well as to declare their overall rejection of mining operations in the area. They argued that the permission was given in an irregular way and that the company had begun operations before consulting the affected communities.

Many have also raised concerns about the mining project’s impact on the environment and specifically the Carlos Escaleras national park where the rivers Cuaca, San Pedro, Guapinol, Ceibita and Tocoa begin. These rivers serve as the major source of drinking water for the Bajo Aguan region and the departments of Colón, Olancho, and Atlántida.

Inversiones los Pinares is owned by Lenir Perez and his wife Ana Facussé, who is the daughter of one of the largest landowners and businessmen in Honduras, Miguel Facussé. The Aguan valley has witnessed many conflicts over land between the peasant community and the Facussé family. The family has many large holdings in the region and runs many extractive projects, as well as agribusiness plantations like african palm.

Due to their key role in the Honduran neoliberal capitalist project, the Facussé family has had armed state forces at their command to repress the resistance of the communities and organizations that oppose their projects or have occupied their land.

During the 90 days that the Tocoa communities sustained the camp, the state, instead of addressing their concerns, sent its repressive apparatus to silence their protest. The camp faced threats from both the security forces and the private armed guards of the mining company. Human rights organizations and anti-mining platforms who have been part of the camp mobilization said that from the day it was set up, the camp faced threats, intimidation and even armed attacks by the company’s security. On August 15, an environmental defender was shot by the company’s private security.

After Saturday’s violent eviction, organizations of the region denounced the increased repression and retaliation by the company’s private security towards the community and people who participated in the camp. The leader of the camp, Irma Serrano, was kidnapped and held for more than 20 hours with her two daughters after her house was burned by hooded individuals. There have also been reports of groups associated with the company shooting at people. The police and army have not taken any action against them despite their being deployed in large numbers in the area.

Due to the increased tension in the area and the high level of militarization, social and human rights organizations in Honduras have called on the international community to remain alert to the situation. They have demanded that the Honduran government cancel the mining project, respond to the grave human rights violations carried out by the state public force, and ensure that the life and liberty of the communities in the region is protected.

The attacks on the environmental defenders happens in the midst of an unstable political context in Honduras. In 2009, there was a military coup which overthrew democratically elected left-leaning president Mel Zelaya. The current president Juan Orlando Hernández (JOH) is serving his second term in office, a violation of the Honduran constitution, and he achieved his electoral “victory” through blatant electoral fraud in late November 2017. This was followed by over seven weeks of uprisings, with highway blockades and massive protests taking place across national territory. During the protests, at least 40 people were killed by Honduran state forces and over 20 were imprisoned for taking part.

Today, Hondurans continue their resistance against the illegitimate JOH presidency and what they call as a “continuation of the dictatorship”. The same political instability, widespread corruption, violence, poverty and lack of opportunities are some of the motivations of the 7,000 Honduran migrants who are currently participating in the migrant caravan and walking towards the US border, trying to escape the Honduran nightmare.