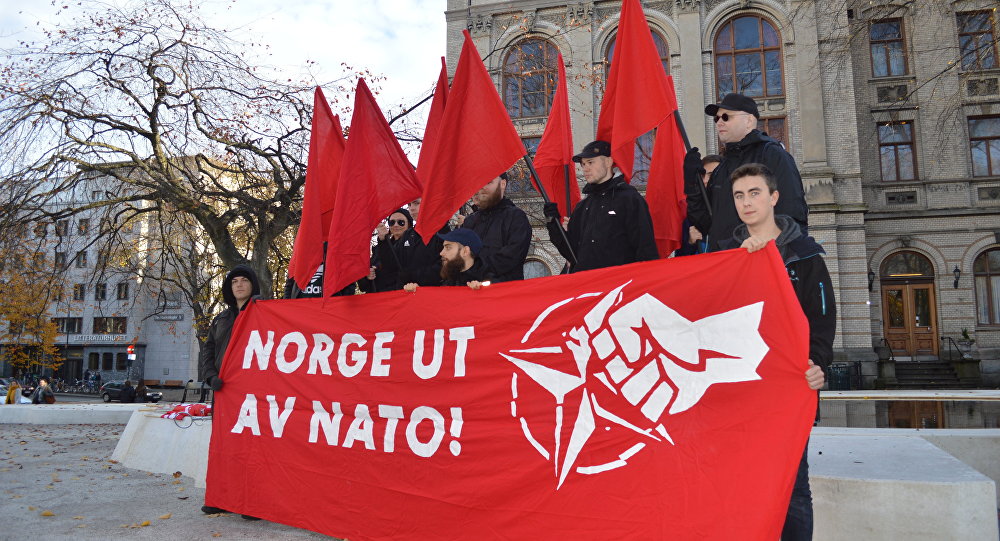 Thousands marched in various parts of Norway against the NATO exercises.

In response to the largest NATO military exercise since the end of the Cold War, Russia launched its own three-day military drill on November 1. The NATO exercise is being carried out in Norway, only 124 miles from Russia’s border. The exercise, led by an US admiral, began on October 25 and will last until November 7. All the 29 NATO member countries are participating in the exercises, in addition to Finland and Sweden, both of which were neutral till now. Protests are being held across Europe against these exercises, and condemning the US military role in the region.

The NATO exercise involves 50,000 soldiers – 18,500 of whom are from the US – and a total of 250 aircrafts, 65 ships and over 10,000 vehicles. “It will simulate NATO’s collective response to an armed attack against one ally. And it will exercise our ability to reinforce our troops from Europe and across the Atlantic,” NATO Secretary General Jens Stoltenberg had said earlier, insisting that the exercise was of a defensive nature.

Norwegian Lt. Gen. Rune Jakobsen, who heads the command center for the Norwegian armed forces, said, “There should not be any reason for the Russians to get scared or see this as anything other than a defensive exercise.” However, Russia clearly does not see it this way and its own exercise will involve test firing missiles into the international waters to the north of Norway. This will overlap with the area where the NATO alliance will be conducting its drill.

Also, Norway has cordial relations with Russia, with the two having peacefully resolved disputes over fishing territory and having cooperated with each other in search and rescue operations.

Norwegians “don’t feel particularly threatened by Russia” and they “don’t consider a conflict likely”, an associate professor at the Norwegian Institute for Defense Studies, Paal Sigurd Hilde, has reportedly said. Seconding his opinion was the defense minister of Norway himself, who has said that Russia “is not a direct military threat to Norway anymore.”

Secretary-General Jens Stoltenberg commented that he expects that Norway, in exchange for the ‘protection’ that NATO is providing, “will make good on their commitments to NATO and to all their NATO allies,” in a reference to the target of 2% of GDP which has been set for every NATO member to spend on the alliance.

However, the Norwegian defense minister has said that the relatively smaller size of Norway’s economy makes it difficult for the country to raise its NATO expenditure to this level quickly.

Three days before the NATO drills began, the Russian foreign ministry spokesperson Maria Zakharova said, “The escalation of NATO’s military and political activity in the Arctic region, namely, in the immediate vicinity of Russia on the territory of northern Norway” is in “violation of all time-tested traditions of good neighborliness and against the policy of the Norwegian government established way back in the Cold War period on self-restraint.” As per this policy, Norway would not offer its ‘territory for armed forces of foreign powers unless Norway is under attack or under threat of attack’. By deviating from its own policies, the spokesperson warned that, “Oslo set the course for unprecedented militarization of its northern latitudes.”

“Europe’s north, which used to be quiet in the military aspect, and the Baltic region are turning into a range for simulating massive combat operations” against Russia, she had complained last month, adding that this is aimed at transforming the region “into a real battleground.”

Two days after the start of the drill, on October 27, about a 1,000 people gathered in Eidsvoll Square in the city center of the Norwegian capital, Oslo, to demonstrate against Norway’s participation in the this military exercise. “War creates terror – war is terror” and “Get the soldiers home” proclaimed placards carried by protesters in Bergen, another city in the southwestern coast of the country. Protests were also held in Trondheim and Kristiansand, apart from cities in other European countries.

While the country’s ruling coalition has backed the NATO drills, the Norwegian Confederation of Trade Unions and two left parties, SV and Rødt, opposed their country’s participation and gave a call to protest under the slogan “Norway out of NATO”.

The head of Rødt, Bjørnar Moxnes, said that this exercise “revolves around an ideology in which war is something magnificent, using military violence to impose their will against weaker states.”

Numerous Norwegian businesses are profiting from the exercise, having signed $179.5 million worth of contracts to supply the participants in the the exercise with 35,000 beds, 1.8 million meals, 4.6 million bottles of water and 660,000 kilograms of laundry-service.

NATO, which was formed with the supposed aim of protecting Western Europe from Soviet aggression, was expected to be dismantled following the Soviet Union’s collapse. James Baker, acting in the capacity of US secretary of state under the presidency of George H. W. Bush Sr., had assured the then Soviet leader Mikhail Gorbachev in February 1990 that the NATO would not expand “one inch eastward”.  However, NATO continued to expand. The image above, showing the area covered under NATO in black, demonstrates the extent of American betrayal, and explains why Russia is not reassured by NATO’s assertion that this exercise is defensive in nature.

The Russian foreign ministry spokesperson also pointed out that NATO’s “joint military costs make up more than half of the global costs for these purposes and exceed many times – approximately 14 times – the Russian ones.”