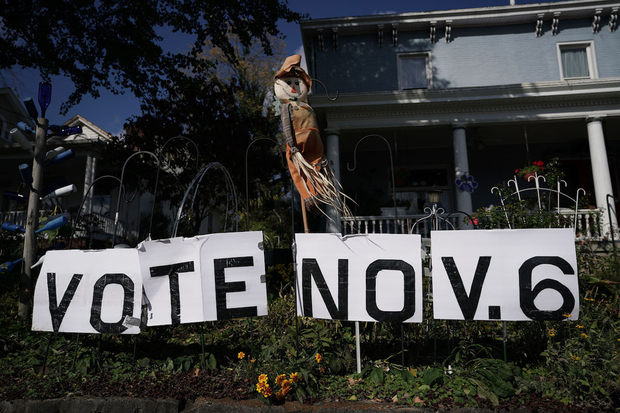 The US mid-term elections that are scheduled for November 6

The US mid-term elections that are scheduled for November 6 have seen campaign spending touch an all-time high. According to an analysis by the Washington-based advocacy group, Centre for Responsive Politics (CRP), spending by candidates, parties, support groups of various kinds and dark money sources is expected to reach $5.2 billion. This estimate is based on mandatory filings with the Federal Election Commission till October 17, and projections for the last two weeks of splurging by candidates locked in one of the most bitterly contested elections in recent times. Elections for 435 House of Representatives seats, 35 Senate seats, 39 Governorships and 87 State legislatures will be held on Tuesday.

Meanwhile, opinion polls are predicting a very tight race, with the Democrats likely to snatch a majority in the House while the Republicans retain the Senate. Early voting in record numbers – about 35 million voters have already cast their votes – also has got political pundits scratching their heads.

Less than two weeks before election day, $4.7 billion had already been spent. Prior to this election cycle, no midterm election had crossed $4.2 billion in spending when adjusted for inflation. The 2018 elections have seen a 35% increase over the 2014 elections in nominal terms, the largest increase in two decades.

In the face of a bruising campaign by the Republicans, led by president Donald Trump himself, there has been an unprecedented increase in Democratic Party spending, which has outstripped the Republicans as of now. Democrats have spent $2.5 billion this cycle compared to $2.2 billion by the Republicans. Official party expenditure was listed at $738 million on campaigns across the country, while the Republican Party spent $694 million. This is not including spending by candidates and other organizations. .

Spending by ‘dark money’ groups — those that do not disclose their donors to the FEC — is down this cycle at nearly $128 million. In 2014, dark money spending was nearly $178 million. However, disclosures by outside groups (groups from outside the State) on spending are 57.4%, which is less than in the 2016 Presidential election (72.2%). The percentage of funds from “partially-disclosed” groups — which either don’t reveal all of their donors or take money from dark money groups — has risen to 31 percent from 15 percent in 2016.

The high levels of partial disclosure suggest that dark money is not disappearing, but rather is being funnelled through super PACs and other external spending groups that give the appearance of disclosing their donors, CRP analysis pointed out.

An interesting highlight of big money donations is the shift of several industrial lobbies from the Republicans to the Democrats in the last 2-3 weeks of the cycle. For example, CPR data shows that oil & gas donated only 12% to Democrats in the past 21 months before October 2018, but since October 1, their donations to Democrats have jumped to 26%. Similar shifts in other industry segments can be seen: insurance (39% to 52%), real estate (47% to 57%), finance (49% to 70%), securities and investments (52% to 71%), health professionals (56% to 77%) and retail (39% to 60%). The only segment of donors where contribution to Democrats has declined is “retired” where it shrank from 53% to 44%.

The elections have been marked by the polarization characteristic of the Trump era with dominant issues being immigration, healthcare, women’s rights and the economy. Better economy numbers (GDP growth, lower unemployment) have come to Trump’s aid even as he continues his hard rightwing and chauvinistic propaganda. The Democrats, on the other hand, have been fighting a do-or-die battle, seeking a mandate which will repudiate Trump and all that he stands for. But whether they will succeed or not is still not clear.

As far as elections to the posts of governors are concerned, there are currently 33 Republican and 16 Democrat governors with one Independent. Opinion polls are predicting that these elections will see 20 Republicans and 18 Democrats elected while results in 12 States could go either way.

Pollsters are being very careful in making predictions this year after the debacle of the 2016 presidential elections when all surveys indicated a Hillary Clinton victory but Donald Trump eventually took away the crown.