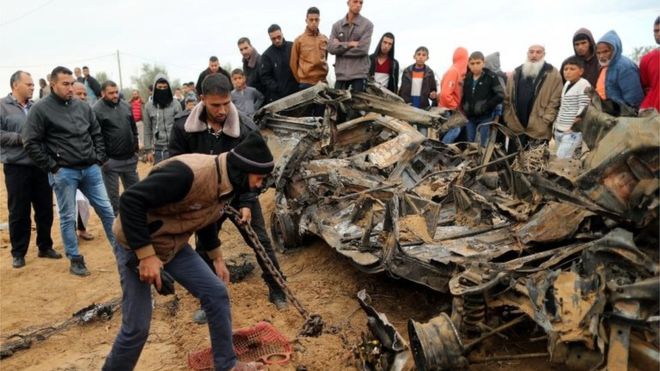 Hours after Israeli Prime Minister Netanyahu’s announcement that he was seeking to explore the possibilities of achieving long-term ceasefire with Hamas, which controls the government in Gaza, Israel Defense Forces (IDF) infiltrated the southern part of the besieged strip last night, and killed at least seven Palestinians, including a Hamas battalion level commander – Nur Barakeh.

Israeli forces used a civilian vehicle to infiltrate deep inside the Gaza strip where three kilometers to the east of the city of Khan Yunis, Barakeh was killed. Hamas has claimed three other casualties on its side after allegedly being fired at by IDF from a moving car.

Following this attack, Hamas retaliated, resulting in an exchange of fire between the two forces, in the course of which, one Israeli officer was killed, and one more wounded.

Both Palestinians in the Gaza strip and Israeli communities off the Gaza border have reported that Israel carried out airstrikes across Gaza at the same time when the shooting broke out. One of the Israeli residents has reportedly told Haaretz that the intensity of the airstrikes was ‘exceptional’, and that it “sounded almost like a war.”

In retaliation, seventeen rockets were reportedly fired from the Gaza strip into the Southern part of Israel, three of which were intercepted by Israel’s Iron Dome missile defense system. No civilian injuries have been reported from Israel as a result of the remaining rockets.

The mission to assassinate the Hamas commander soon after declaring Israel’s intention to work towards a ceasefire is another major setback to the efforts of Egypt and UN to negotiate a ceasefire between the two parties.

Previously, on October 26, it was reported that Egypt had brokered a deal between Hamas and Israel, whereupon Hamas agreed to ensure that the protesters participating in the weekly Great Return March at the Israel-Gaza border will not fly incendiary balloons and kites into Israel, and Israel in return will ease the blockade which has been choking the supply of essential commodities including food and medicines to the civilians in Gaza.

On the same day, Israel killed five, and seriously wounded 180 protesters participating in the Great return March by firing at them from behind the border fence. Hours later, Israel flew its fighter jets over the Gaza strip, and bombed 80 targets throughout the night.

Egypt, however, has continued its attempts to bring about a ceasefire. After further negotiations – in which Nikolay Mladenov, UN special coordinator for the Middle East peace process, also participated – Israel, on November 9, allowed Qatar to transfer cash worth $15 million to Gaza through its territory to pay the salaries for the civil servants administering the strip.