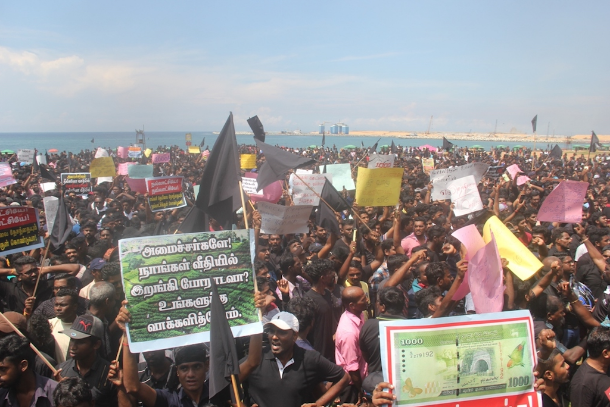 Relatives of tea workers stage a protest in Colombo on Oct. 24 urging the government to increase the daily wage of pickers. (Photo by Niranjani Roland/ucanews.com)

Tea garden workers in Sri Lanka are waging a struggle against low minimum wages and for an end to their slave-like living conditions. Last month, on October 24, thousands of tea garden workers held a demonstration at the Galle Face Green in Colombo demanding an increase in wages of those working in tea plantations across Central and Uva hills. Several such demonstrations have been taking place since August. Among other demands, protesters are seeking to revise the Collective Agreement signed between Employers Federation and workers unions in 2016. They demand an increase in daily wages from Sri Lankan rupees 500 to 1000.

Protesters also noted that their daily wage of rupees 500 is often held back, and paid only after a go-ahead by the estate supervisor and other management staff. Presently, low wages is a major issue the Malaiyaha Tamil community faces, apart from property rights that have been denied to the community despite having lived in these estates for generations.

“We pluck tea leaves even in the rain and under the hot sun,” said Female tea picker Kandasamy Amurdhavalli, 67, from the Thalgaswala estate of Elpitiya. “Leopards attack us on the estates, but our wages are very poor. The estate owners never consider our fundamental rights.”

Sri Lanka is the second largest tea exporter in the world and the industry is the main source of foreign exchange earning, but workers employed in the sector remain poor and exploited.

Most of the tea garden workers are Tamils and are forced to live substandard living conditions. They end up working in the plantation sector for low wages as the land belonging to Tamils continues to be occupied by the military even after the end of the 26-year long civil war in 2009.

The mobilisation for these protests was done using social media. “There was no political or trade union involvement in the gathering we have relied entirely on social media to spread the information about the protests. Initially, we expected a crowd of around 15,000 people, however, we believe the turnout has exceeded that figure,” one of the organisers said.

This decision to not involve mainstream trade unions comes from the disappointment workers have repeatedly faced from union leaders, some of whom have held offices in government and other positions of influence in the administration. Because of their positions in the neoliberal regime, most of these union leaders are involved in the backroom discussion to try and keep the plantation owners satisfied. Rather than furthering the workers’ rights, these unions have been proving detrimental to their cause as they often call off strikes and other planned action citing mild promises by the government which do not result in anything substantial.

During earlier protests, M. Yoheswaran, a plantation worker was quoted in World Socialist Web Site saying, “The unions are involved in secret discussions with the companies and refuse to tell us what they are demanding. They will cheat us again like they did last time. The trade unions are not ready to fight for our demands but just striving for their own privileges.”

Workers are now feeling the need to create their own bodies, independent of these mainstream unions, to assert their collective strength in their fight for rights and greater control over plantations.

Protesters included women working in rubber plantations in Kalutara, along with the tea pluckers in the hill country. Earlier, protests were held in several parts of Central and Uva province where most of the tea estates are located.

According to local reports, the minority community is facing problems in getting food and an education for their children. The issues in estate structures restrict their children from opting for higher education and availing jobs. The increase in the living cost coupled with a low wage further complicates their daily struggle to make ends meet.