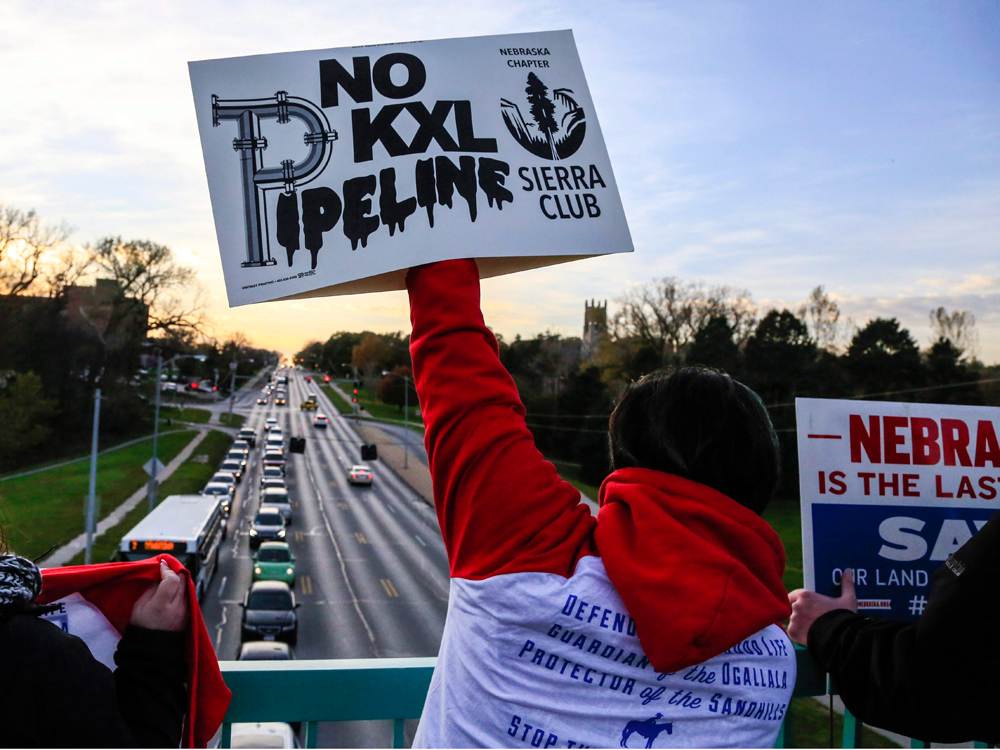 The Keystone XL pipeline is the proposed fourth phase of the existing Keystone pipeline system, which runs across the length of continental United States.

On November 8, a US federal judge ordered a temporarily halt to the construction of the highly controversial Keystone XL pipeline, pending a comprehensive environmental review. Indigenous activists and protesters have been fighting a protracted battle against the Trump administration and the TransCanada Corporation, which owns the Keystone pipeline system of which Keystone XL is a part of. They have been consistently claiming that the project threatens the environment, as well the region’s natural heritage.

Celebrating the order, Marcie Keever, legal director of the Friends of the Earth, asserted that “rejecting the destructive Keystone XL pipeline is a victory for the grassroots activists who have worked against the Keystone XL pipeline for the past decade”. May Boeve, executive director of the 350 Action, in an interview to Democracy Now!, echoed Keever’s sentiments. “We are so celebrating the work of these brave, young activists who have brought this incredible suit against the federal government” Boeve was quoted as saying.

Judge Brian Morris of the U.S. District Court for Montana passed the order, stating that the U.S. department of state had failed to give proper justification for approving the pipeline and ignored concerns of climate change. Judge Morris also demanded that a proper environmental impact review of the project be done before any further construction was undertaken.

The Keystone XL pipeline is the proposed fourth phase of the existing Keystone pipeline system, which runs across the length of continental United States. The Keystone pipelines connects the sand tar pits  in Hardisty in Alberta, Canada to refineries in Houston and Port Arthur, Texas, in the US. The Keystone XL proposal involves the construction of another wider pipeline through a shorter route. Keystone XL is proposed to be almost 1,900 km in length from Hardisty to a transfer point in Stele City, Nebraska, from where it will connect to the main pipeline. This will enable the pipelines to carry over 800,000 barrels per day, an increase from the current maximum capacity of 700,000 barrels per day. The project itself is estimated to cost about US$ 8 billion.

Keystone XL was approved by President Donald Trump in March 2017. The pipeline, a project of the TransCanada Corporation, a company based out of Calgary in Canada, was rejected in 2015 by the Barack Obama administration after six years of review. This rejection was mainly a result of protests as a section of the pipeline was to go through the prairies of Sandhills in Nebraska, the dunes of which are designated as a National Natural Landmark.

Indigenous activists and residents of settlements in the vicinity opposed the construction of the pipeline, citing concerns of environmental impact, climate change, and damage to natural heritage due to the risk of a potential oil spill. The oil from the tar sands is found to be both high  carbon-emitting – with estimates that it can emits around 17% more greenhouse gases than more conventional petrol – and too sludgy, making it extremely difficult to clean in case of a spill.

It was these kinds of protests that forced the Obama administration to reject the proposal, citing unsatisfactory assessment of its impact, both on national interest and the environment. For the next three years, the project faced consistent stifling by president Obama, even as he approved other such projects.

In the midterm elections of 2014, the Republican Party took both the houses – the Senate and the House of Representatives. This was significant since the Republicans in Congress had been ardent supporters of the proposal. On January 9, 2015, the Nebraska State supreme court cleared the proposal, which was followed by a bill approving the pipeline getting passed in both the Senate and the House of Representatives. However, on February 24, president Obama vetoed the bill.

In the Presidential election of 2016, Donald Trump – who endorsed Keystone XL as part of his campaign – won, and took office on January 20, 2017. Two months later, he gave his presidential assent for the pipeline. In November 2017, Nebraska cleared the pipeline with an altered route that made it longer by over 100 km, which was deemed to cause comparatively lesser environmental impact than the original route. This in turn led to more legal and bureaucratic hurdles but on July 30, 2018, the department of state gave environmental clearance to the new route, after a draft environmental impact study, pushing the project forward.

It is this process that was halted by judge Morris. Dismissing the environmental clearance, he ordered a comprehensive study on the environmental impact. In his statement hailing the order, Doug Hayes, a senior attorney with the San Francisco-based Sierra Club, that has been fighting the pipeline, criticised the Trump administration  as having “… tried to force this dirty pipeline project on the American people”.

Judge Morris’ order described the draft study on which the environmental clearance was based as inadequate. He said it had not taken into consideration the full impact on climate change. The court stated that the administration acted in direct contravention to the Administrative Procedure Act, because the government was unable to give any ‘reasoned’ defense of clearing the project.

President Trump criticized the verdict as ‘political’, hinting at the fact that the judge was appointed by the Obama administration. Even as the opponents of the project are celebrating the victory, they are mobilizing to take on whatever comes next. While talking to National Public Radio, indigenous activist and a resident of Montana who would have been affected by the project, Angeline Cheek called judge Morris’ order a “temporary win” and added that “…our fight is never over.” With the recent midterms placing the Democrats in a leading position in the House of Representatives, the deal could be blocked in Congress too.

Even if the project is approved, TransCanada will struggle to complete  the project at the original cost as a new round of land acquisition will be needed for revised route. Many landowners on the route are reportedly reluctant to lease their lands for the pipeline. The economics of the project has also been questioned since much of the touted benefits, including the promise of new jobs for the locals, and a decrease in petrol prices, have been achieved by both the current and past administrations without the project.

There are also a number of other projects which face far less hurdles and have much greater capacity to transport Canadian oil. All these factors together, opponents of the project hope, will bury a pipeline which is problematic and dangerous at various levels.