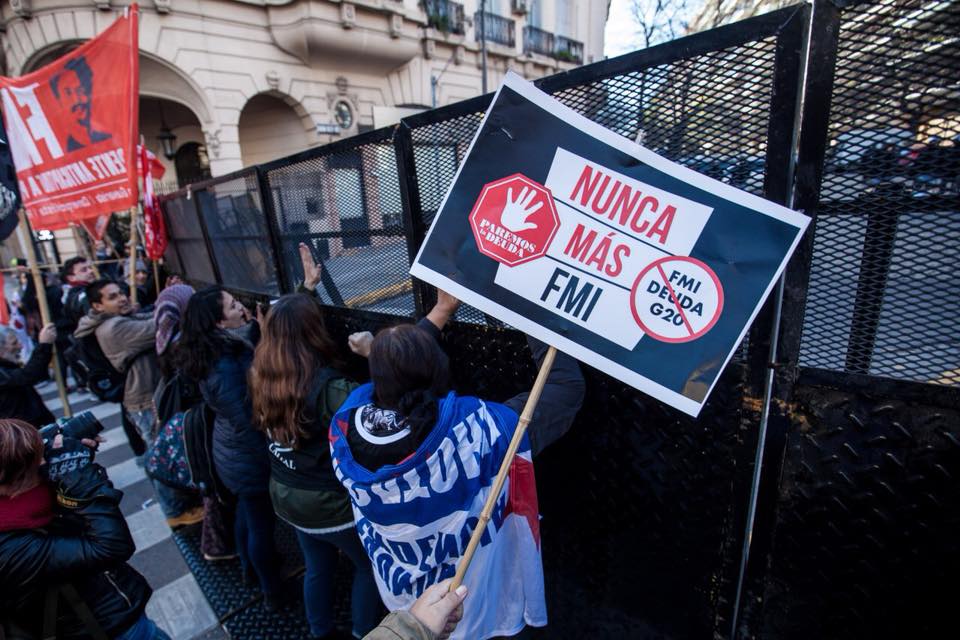 Argentina is at a critical moment. This year, its currency devalued 50%, plunging millions into deeper economic insecurity. The worst affected were those who had already been hit by the cuts in social programs and aid. Across the board, the country saw a drastic increase in hunger and homelessness. Presiding over all this was the much-reviled International Monetary Fund (IMF), whose $50 billion dollar loan came at a steep price. Meanwhile, none of this misery seemed to have had any impact on president Mauricio Macri, whose anti-people policies continued unabated.

These policies spurred waves of protests in Argentina. And the state responded with heavy repression. Since Thursday, state forces killed two social leaders – Rodolfo Orellana and Marcos Soria – both from the Confederation of Workers of the People’s Economy (CTEP), and also carried out several raids against organized workers strikes as well as informal street vendors.

It is in this context of misery, mobilization and repression that the first G20 conference to be held in a Latin American country is taking place in Argentina on November 29-30. The ruling classes of the country seem unfazed by the ineffectiveness of the G20 as a mechanism and its association with the neoliberal regime that has caused so much damage to the country.

Talking about the mobilization planned against this gathering of global leaders, Bettina Müller of Attac Argentina and the Platform “G20, IMF Out!” said, “We have been organizing since the beginning of the year when we found out that they would hold the G20 here in Argentina. This is after all the principal forum of the self-proclaimed ‘informal government of the world’ where the 20 heads of governments that are most powerful and most aligned to imperial interests and ‘western world’ participate.”

The week of action began on November 26, with a series of important activities, including the People’s Summit scheduled for the 28th and 29th with different panels and forums on extractivism, feminism, debt, corporate power, labor, and everything that the working class is facing today. “We also address some of the same issues that the G20 itself works on, but of course they do so with an anti-people perspective. We are here to say that we are not only against the G20 but we also organize this People’s Summit to present our proposals, the proposals from the people and for the people.” she added.

On the 29th, she said, the protests will be held in front of the Congress itself. There will also be activities such as a fair of the social and solidarity based economy. “This is to show that the people are here, they are not hidden behind three rings of security, guarded by 25,000 police that will be patrolling the streets in these days…We know we have the right to be there and we defend the interests of the people, unlike them who defend the interests of big capital. And on the 30th we will be in the streets because it is the first day of their G20 Summit. Trump will be there, Angela Merkel, Putin, all of the big world leaders, so we will be in the street,” Müller said.

“We are not expecting much from the G20 anyways..We know it will be another international flop for Macri,” she added.

The journey so far

The popular mobilizations in Argentina began last week with the 8th edition of the Latin American and Caribbean Conference of Social Sciences (CLACSO) which saw leaders of the left and progressive sections in Latin America, including Dilma Rousseff, Cristina Fernández de Kirchner and Guilherme Boulos speak on the the possibilities and challenges ahead. The country itself has seen a wide variety of popular mobilizations over the past few months. These include massive national strikes in September and protests against layoff and budget cuts in August. These were in response to aggressive austerity measures announced by Macri at the insistence of the IMF in return for the loan.

The capitulation of the Macri government gave rise to the slogan ‘Never again IMF’ as Argentines remembered the havoc wreaked on the country during the IMF’s earlier intervention in the 2000s. Simultaneously, Macri also laid the path for the military to be used against protesters, anticipating the waves of resistance that would emerge.

Meanwhile, Argentine society saw another major churn as women’s organizations achieved massive mobilizations in support of a bill decriminalizing abortion. The bill fell at the final frontier, and soon enough the perils of criminalizing abortion were yet again evident from a number of deaths that occurred but women’s rights activists have vowed to fight on, confident that victory is not too far away.

The last few months have also seen sustained struggles by members of the indigenous communities and farmers fighting for the preservation of their right to re-plant seeds even as the state response has been harsh. A recent victory in a local body poll against Macrism – the ideology of Macri – has been a ray of hope for movements across the country.

For these movements, the challenge is in uniting further and creating more powerful platforms that can fight the ideologues, executives and executioners of capital. As a recent dossier by Tricontinental: Institute for Social Research notes, these recent protests “re-triggered public debates about neo-liberal economic policies and the role of unions in resisting them.”  However, what they have not been able to do “is [to create] a unified force that represents a clear opposition to the neo-liberal policies that are hollowing out Argentina. Nor is there a clear electoral strategy that has the capacity to challenge the government at the polls. These are limitations that need to be closely followed in the next few months.”

The mass protests that are likely over the coming days may be an opportunity to create and visualize such forces. For the Argentine people, the moment of reckoning is fast arriving.