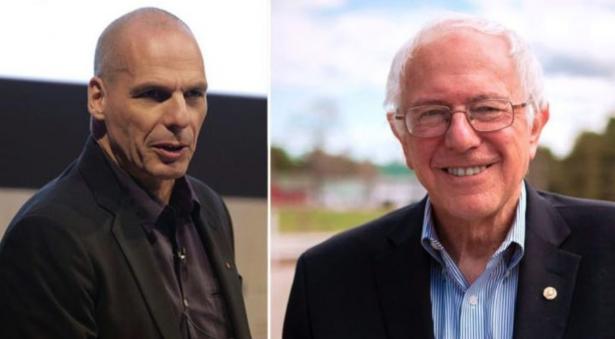 Left-leaning and progressive politicians, academicians, trade union leaders and activists from across the world gathered at the inaugural conference of the Sanders Institute in Burlington Vermont, in the US from November 29 to December 1.

The purpose of the gathering was to discuss solutions for global problems, such as lack of accessible healthcare, homelessness and environmental degradation. The gathering also discussed the way forward in the fight against racist and xenophobic far-right forces that are on the rise across the world.

Strategies for a leftward push in the 2020 general elections in the US were also discussed, with various speakers, including the former Greek finance Minister and economist Yanis Varoufakis, urging Senator Bernie Sanders to contest in the elections.

In his address, Varoufakis said, “Let me convey a message from all of us in Europe, for all those comrades of yours who are now struggling to reclaim our cities, our world, our environment. We need Bernie Sanders to run for president.”

Setting the minimum criteria for a progressive presidential candidate, author and journalist Naomi Klein argued that having a plan for job creation and the transition of the economy from one reliant on fossil fuels to one largely dependent on renewable energy was a must for “any candidate who wanted to run as a progressive in 2020”.

Drawing attention to the fact that more than an election was at stake, academician Cornel West pointed out that with the “neoliberal establishments” losing credibility across the world, the only alternative that is being presented was “vicious authoritarianism, fascism. If we don’t have a left populism that’s credible, we’re running down a fascist road.”

While the progressive leaders at the Sanders Institute discussed solutions to the problems created by neoliberal policies, Brazil’s new far-right president Jair Bolsonaro – who won the elections after the popular Lula da Silva was framed for corruption charges – met the US national security adviser John Bolton on the sidelines of the G20 meeting in Buenos Aires. Brazil was “harvesting the consequences of the neoliberal project’s failure,” said Fernando Haddad, the presidential candidate of Lula’s Workers Party, who lost to Bolsonaro.

Following the blow that was dealt to the neoliberal order by the 2008 financial crisis, “two kinds of people united internationally: bankers and fascists,” Varoufakis commented, lamenting that “The only people who never bound together were progressives.”

After Varoufakis, Sanders, Irish economist David McWilliams and Canadian MP Nikki Ashton discussed the challenges and the way forward for international cooperation among progressive movements, the Progressive International was launched as a platform over which left movements and parties could coordinate and share best practices from around the world.

The mayors of San Juan in Puerto Rico, New York, Stockton, California and Barcelona also participated in the conference.  A mayors’ roundtable was held to discuss the challenges and opportunities before the head of a city and to share experiences. Presidents of several trade unions, including United Electrical, Radio and Machine Workers of America, American Postal Workers Union and National Nurses United also participated in the conference.

The largest organization providing medical care to over a million people affected by AIDS in 42 different countries, the AIDS Healthcare Foundation (AHF), was another participant at the conference where the healthcare crisis was discussed and universal healthcare was advocated for.

Having launched the Healthy Housing Foundation late last year, the AHF representative also delivered an address on solutions to homelessness. Since its launch, the HHF has taken part in various community-based efforts to address the housing crisis. Purchasing three hard-pressed underused  single-room-occupancy hotels (SROs) in Los Angeles and one motel in Hollywood, the HHF has repurposed them to serve as housing units for 600 homeless people.