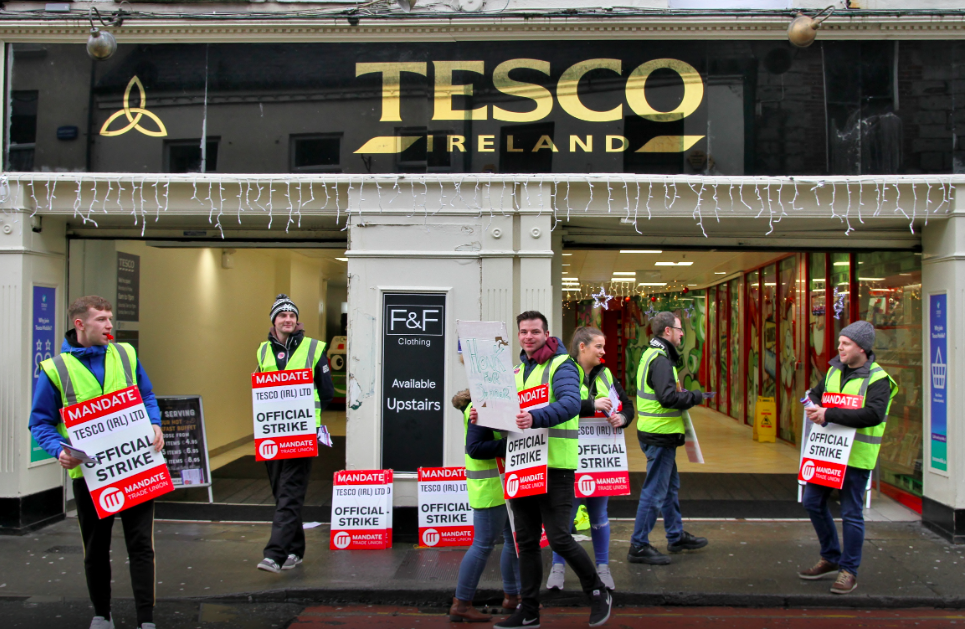 The workers of supermarket chain, Tesco, in Ireland are gearing up for a strike during Christmas, raising several demands including the recognition of their right to unionize. The strike that began on Thursday involving workers of the store in Sligo will be joined by workers of 20 Tesco stores in different parts of the country. A strike by workers of the Tesco store at Carrick-on-Shannon is next in line, scheduled on December 22.

Mandate, the union which represents more than 8,500 staff, is leading the strike. Mandate claimed that Tesco had (1) refused to engage on workers’ pay and conditions of employment; (2) victimized workers for protesting their working conditions; (3) Removed canteens and break facilities; (4) Refused pay increases to their longest serving staff; and (5) Refused to accept the workers’ right to be collectively represented by their trade union.

The Tesco management’s refusal to engage is viewed by Mandate as part of a campaign to deny the workers their fundamental human rights. Tesco is one of Ireland’s most profitable retailers, generating more than €250 million in profits per year from the Irish business alone. Despite these extraordinary profits, the company is engaged in a national campaign to break their workers’ union. According to Mandate, the company is doing this in order to extract more profits for the shareholders.

The Tesco Workers on strike at Sligo accused the management of distributing €10 vouchers in Sligo town in an effort to encourage people to pass the pickets. The workers said that such an action would cause enormous damage to the relationship between their workers and their customers. According to reports, the workers had assembled in front of the store on O’Connell Street as early as 5 am and mounted the picket lines till 11 pm. The workers at Sligo will go on strike again on Friday, December 14.

The assistant general secretary of Mandate, Gerry Light, accused the company of “derecognition” – refusing to engage with the union on staff issues, including security bag checks and changes in canteen facilities. Mr. Light also said the parties were given four dates at the Workplace Relations Commission (WRC) but Tesco refused to attend. Citing an article published on journal.ie on February 14, 2017, Mandate pointed to Tesco’s notorious history of covert attempts for union busting under the advice of the legal firm Eversheds.

According to a news report by RTE on December 5, Tesco had said that “the dispute in Sligo and Carrick-on-Shannon involved local issues and did not warrant strike action.” Refuting Mandate’s claim that the company refused to engage at the WRC, Tesco accused the union of operating outside normal industrial relations procedures by denying to engage at the WRC.

On February 14, 2017, Tesco workers had gone on strike against the proposal for reconfiguration of the contracts of workers who had been employed before 1996 to inferior contracts. The staff who refused to change their contract has been denied a rise in pay.

The Dublin District Committee of the Communist Party of Ireland, in their statement, congratulated the Tesco workers in Sligo for their successful strike on Thursday and urged the people of Sligo to continue the support by not passing the pickets. The party also expressed solidarity with the workers at Tesco, Ireland and encouraged other branches to gain confidence and join the protests.

“Tesco is a multi-million euro profit-making business. These profits are made through the hard work and sweat of their excellent employees. Tesco have refused to negotiate with Mandate trade union, they refuse access to union officials and they also refuse the union permission to put information notices on notice boards in the branches. This is a blatant attempt by the management to bully workers out of the Union and continue the race to the bottom in pay and conditions for the workers,” the Party said.