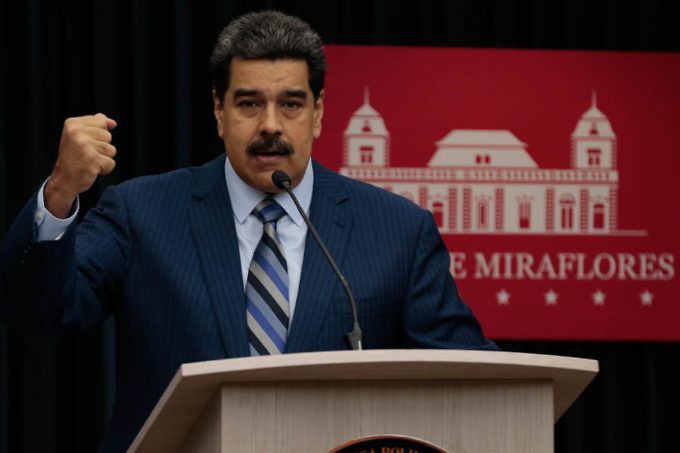 Maduro made the announcements during a press conference on Wednesday, December 12. (Photo: Presidential Press)

Venezuelan President Nicolas Maduro revealed that they had uncovered a fresh plot by the United States to kill him and install a right-wing dictatorship in the Latin American country. In a press conference held at the Miraflores Palace on December 12, he accused the White House of directly coordinating the operations under the leadership of the US national security adviser, John Bolton. He claimed that the mercenaries had been trained in Colombia with the support of the Colombian President Ivan Duque’s regime. Maduro also lashed out at Brazil’s incoming far right wing president, Jair Bolsonaro, and claimed that Bolsonaro was obsessed with the idea of invading Venezuela.

According to Maduro, around 700 mercenaries are being trained in Colombia and a commando group is being trained in the US territory, in the Eglin Air Force Base, Florida to destabilize the Venezuelan government.

The new revelations came in the wake of the successful conclusion of municipal elections in the country. Maduro’s Socialist Party of Venezuela (PSUV) emerged victorious in the polls which were held amidst a rampant campaign by the right-wing forces and the corporate media to boycott the polls.

Earlier, on August 4, during the 81st-anniversary celebration of the Bolivarian National Guard at the Bolívar Avenue in Caracas, an attempt was made to assassinate Maduro using two M600 model drones, each carrying one kilogram of explosives. An investigation into the assassination attempt on Maduro has led to the arrest of six people, who are believed to be directly responsible for it.

In the press conference, Maduro vowed to resist what he called the “neo-fascist madness” of his foreign foes and called on the international community to denounce the alleged plot against him. “Venezuela will not be a victim of a neo-fascist aggression,” he said.

The US has been carrying out a fierce campaign against the Bolivarian Republic of Venezuela on different fronts since the socialist government in the country under the leadership of late Hugo Chavez came to power in 1999. In April 2002, a US-backed coup attempted to overthrow Chavez’s government, but a severe resistance from the people and country’s military foiled the plan.

The attacks continued against his successor, Nicolas Maduro, and the campaign was intensified in 2015 when the former US president, Barack Obama, issued a decree declaring Venezuela a threat to US national security. Harsh sanctions were imposed by Obama and his successor, Donald Trump as an attempt to destabilize the nation through economic measures.