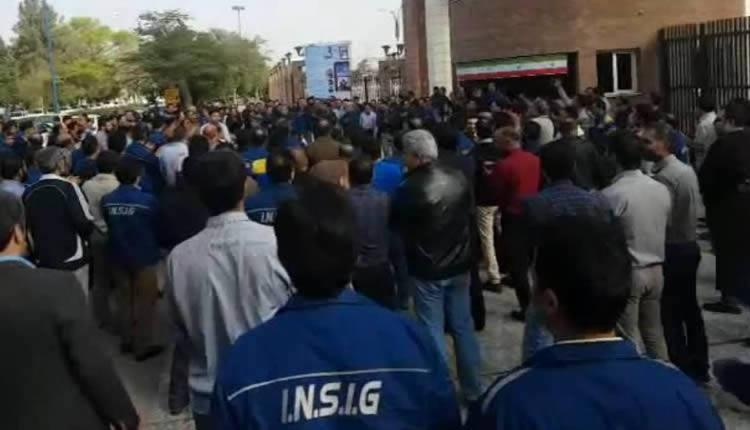 The steel workers had been on strike since last 38 days. (Photo: Our Iran)

Iranian security forces arrested 10 more steel factory workers in the southwestern city of Ahvaz on Tuesday, bringing the total number of arrested workers to 41. According to Iran’s Free Labour Union, at least 29 workers were arrested on Monday. Most of the workers were at home when they were forcefully dragged out and arrested in midnight raids.

The striking workers demand that they be paid their wages which are now two months’ overdue. The workers also ask for urgent improvements in workplace safety, a guarantee of social insurance and fresh investment in the company by the government so that the production lines which were stopped can be restarted. They also demand an immediate release of their colleagues who have been detained.

Thirty-one arrested workers were taken to the Sheyban prison in Ahvaz on Monday. Ahvaz is the capital of the oil-rich Khuzestan province. The striking workers, of the Iran National Steel Industrial Group (INSIG), have been on strike for the last 38 consecutive days. Meanwhile, many workers decided to spend the nights on the streets in order to evade arrest in the midnight raids on their homes.

The workers assembled and held demonstrations outside public buildings and the office of the city’s Friday prayer leader, Ayatollah Mohammad Ali Mousavi, chanting anti-regime slogans. One of the slogans, referring to the President of Iran, Hassan Rouhani, and his logo during the presidential elections (a key), said, “The lying locksmith, where is your key to prudence?”

The factory in Ahvaz was founded in the early 1960s and, at present, employs 4000 workers. It was privatized in 2008 but, due to financial hardships, was returned to government ownership in 2016, according to a report by the semi-official ILNA news agency. The steel factory is owned by Bank Melli, one of Iran’s largest financial institutions.

The ongoing strike is the third by INSIG workers in 2018. In June, more than 60 workers were arrested and put in jail by security forces. Several workers were beaten viciously and not given access to proper medical treatment. They were later freed only after the rest of the striking INSIG workers intensified their protests with the support of other workers.

In a show of support for the striking workers, hundreds of pensioners protested outside the regime’s parliament in the Iranian capital, Tehran, on Tuesday morning, shouting slogans like “From Ahvaz to Tehran, workers are in jails”, “Free the steel workers”, “Imprisoned workers must be freed”, “Imprisoned teachers must be freed”, “Government engages in crimes, parliament supports it”, “Free insurance is our right” and “The enemy is here, they lie to us that it’s America”.

Iran’s economy is facing troubled times due to the neoliberal economic model pursued by the Rouhani government. The crisis is exacerbated by the economic sanctions imposed by the United States.

Rouhani is considered to be a staunch supporter of privatization and anti-trade union policies.  In his book, National Security and Economic System of Iran, he argues that that ‘the minimum wage must be slashed’ and restrictions on the laying off of workers eliminated for Iran’s ‘owners of capital’ to help flourish the country’s economy. He notes “one of the main challenges that employers and our factories face,” Rouhani writes, “is the existence of labor unions. Workers should be more pliant toward the demands of job-creators”.

Slashing down on welfare policies (except health services), austerity measures and privatization of education had been priorities of the regime, and at the same time, the budget allocation for defense has witnessed a spike. Under Rouhani’s regime, the defense budget saw an increase of 145 percent.

For Ahvaz’s steel factory workers, as for others, the non-payment of wages combined with currency devaluation and price hikes has made the situation worse.