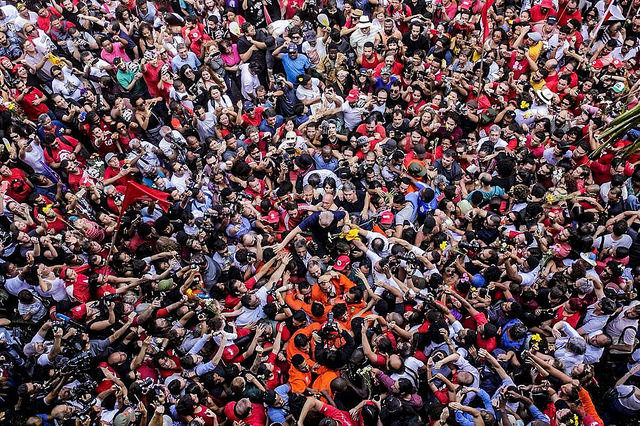 The persecution of former president Luiz Inácio Lula da Silva was emblematic of the challenges faced by the people of Brazil in the past year. The legal crusade against Lula orchestrated by the Brazilian judiciary and hegemonic media did not just have the end goal of incarcerating an innocent man, but it also sought to extinguish the chances of an alternative, pro-people project winning the presidential elections. In effect, they were successful.

The result was the election of Jair Bolsonaro, an ultra-militaristic, right-wing, religious extremist who has pledged to continue imposing neoliberal economic policies that impact Brazil’s working class and poor while encouraging hatred and violence against LGBTQI people, Black people, poor, social movements and dissidents in general.

On January 24, 2018, an appeals court in Porto Alegre, Brazil confirmed a previous ruling against Lula of the Workers’ Party, sentencing him to over 12 years in jail.

On April 4, the Supreme Court rejected the habeas corpus presented by Lula’s defense. The habeas corpus would have permitted Lula to remain free while he appealed his criminal conviction. The following day, Sérgio Moro, the federal judge heading the Lava Jato investigation and the soon-to-be Minister of Justice in the Bolsonaro presidency, gave Lula until 5 p.m. of the next day to present himself to the Federal Police of Curitiba, a city in the south of Brazil, to begin his sentence.

The declaration of the judge caused an uproar both within Brazil and internationally. Major international media organizations denounced the decision as a sign of the decay of Brazilian democracy.

The fateful week saw an intensification and amplification of mobilizations and actions in support of Lula that had been happening in universities, municipalities, plazas, highways, roads, etc. across towns, villages and cities in Brazil.

However, despite unprecedented levels of national and international mobilization in support of Lula, the Brazilian judiciary refused to relent. After delivering a historic speech to thousands of activists outside the Metal Workers Union headquarters in São Bernardo do Campo, Lula made his way to Curitiba where he turned himself in to the Federal Police. From that day, a new phase of resistance began for Brazilians. Diverse social movements and trade unions pledged to sustain a resistance camp outside the headquarters of the police where Lula was being held – the Free Lula Vigil – which to this day remains, and sees visits from activists, politicians, musicians from across Brazil and the world. Lula’s plight for freedom has also been supported by world-renowned public intellectuals like Tariq Ali, Robert Brenner, Wendy Brown, Noam Chomsky, Angela Davis, Axel Honneth, Fredric R. Jameson, Leonardo Padura, Carole Pateman, Thomas Piketty, Boaventura de Sousa Santos and Slavoj Žižek.

Despite his incarceration, Lula’s supporters and the Workers’ Party remained hopeful that he would be able to register as a candidate and run in the October 2018 elections, and polling numbers of voter intention continued to show Lula having a significant advantage over Bolsonaro. Leading up to the registration of his candidacy in Brasilia on August 15, there was a new surge in mobilizations in support of Lula.

Seven activists from Brazilian social movements and trade unions embarked on a hunger strike on July 31 which lasted 26 days and sought to raise awareness on the impact of the 2016 verdict on Brazilian democracy and demand the liberation of Lula.

The Free Lula Committee called on movements and collectives in Brazil and across the world to hold actions of solidarity on August 12 and 13 to renew the demands for the immediate liberty of Lula and support the registration of his candidacy. At the same time, over 5,000 activists from the Landless Rural Workers’ Movement (MST) from diverse regions of Brazil marched towards Brasilia in the “National Free Lula March” to accompany the registration of his candidacy in the capital and demand that the Supreme Electoral Tribunal respect his right to political participation in the upcoming elections.

On September 1, the Supreme Electoral Tribunal of Brazil (TSE) voted to bar Lula’s candidacy. This was just 2 weeks after the United Nations Human Rights Council requested the Brazilian state to ensure that Lula can “enjoy and exercise his political rights while in prison, as a candidate to the 2018 presidential elections, including appropriate access to the media and members of his political party.”

The Workers’ Party was left with no other option than to register Fernando Haddad, originally designated as vice-presidential candidate, and Manuela D’Avila from the Communist Party of Brazil. The duo waged a strong campaign which was accompanied by mobilizations on the streets and on social media, most notably the #EleNão mobilizations against Bolsonaro.

In the first round of the elections, Bolsonaro won 46.03% of the vote and Haddad 29.28%, nearly eliminating the possibility of a second round. On Sunday, October 28, Jair Bolsonaro won the presidential election with 55.3% of the vote, while Fernando Haddad of the Workers Party came second with 44.7% of the vote. The election was one of the most polarized in Brazil’s history and saw two opposing projects for Brazil at odds – one that rallied people around hate and fear while the other sought to save Brazilian democracy, freedom and rights.

Bolsonaro encourages buying and using guns. He has openly declared hatred of Black people, LGBTQ people, Indigenous people, the poor and working class, and has declared some of Brazil’s most powerful and historic social movements as “terrorist organizations”. The impact on Brazilian society and democracy will be profound. In response, social movements, organizations, trade unions, collectives and civil society organizations have united around their commitment to defend Brazil and those that are most vulnerable.

Another central commitment of Brazilian movements is to the defense of Lula and demand for his immediate liberation. After the elections in October, João Paulo Rodrigues, of the national board of MST, stated, “President Lula is not alone, and we can’t allow that this coup and the authoritarian government to keep him prisoner for much longer. The coup supporters and this authoritarian government will probably persecute the peoples’ movements, the militants of trade unions and of the MST. But the MST are not cowards, it will not be intimidated by the shouting of Bolsonaro, it will be in the trenches of struggle.”

Recently, there was a glimmer of hope for Lula when on December 19, Brazil’s Supreme Court justice Marco Aurélio Mello issued a ruling ordering the suspension of prison sentences for all convicts who have appeals pending after having their conviction upheld by an appeals, a decision which could have led to his release. However, five hours after Mello issued the ruling, the court’s chief justice and duty judge Dias Toffoli struck down the decision.

Nevertheless, the struggle for his freedom will continue, as will the struggle for true democracy in Brazil, where all Brazilians have access to land, housing, healthcare, education and all of their basic needs met to live a dignified life. 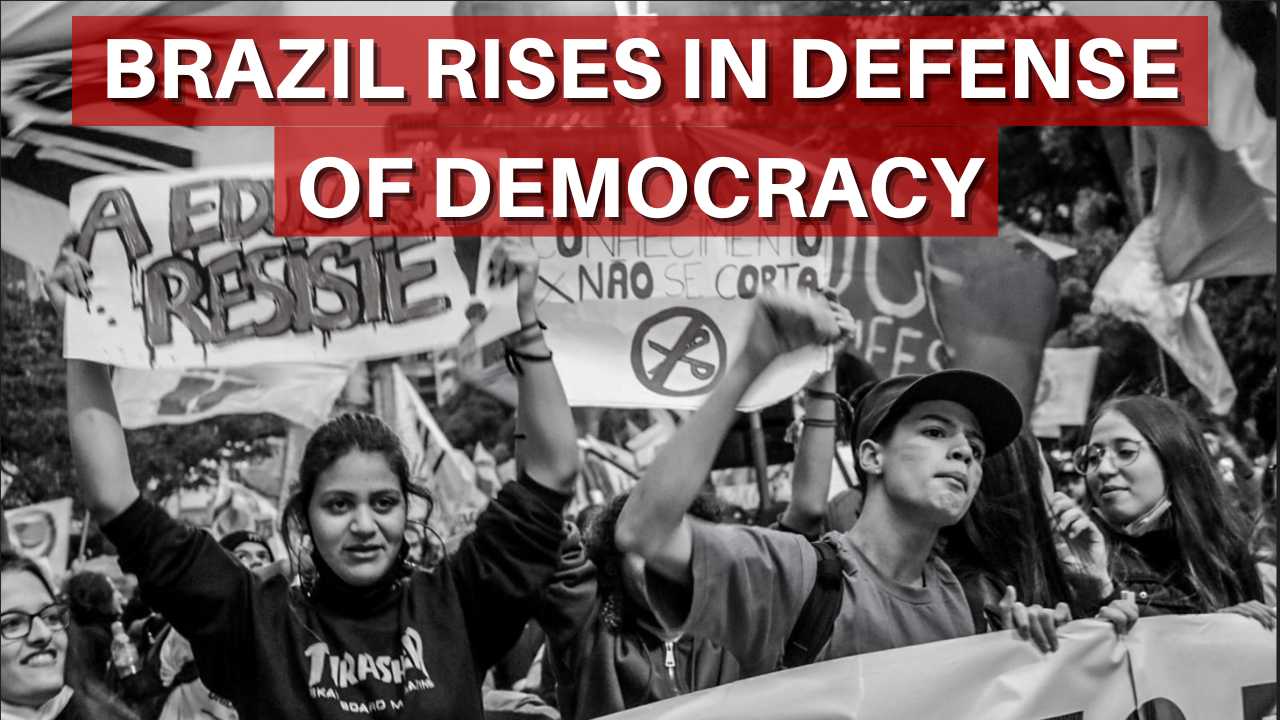 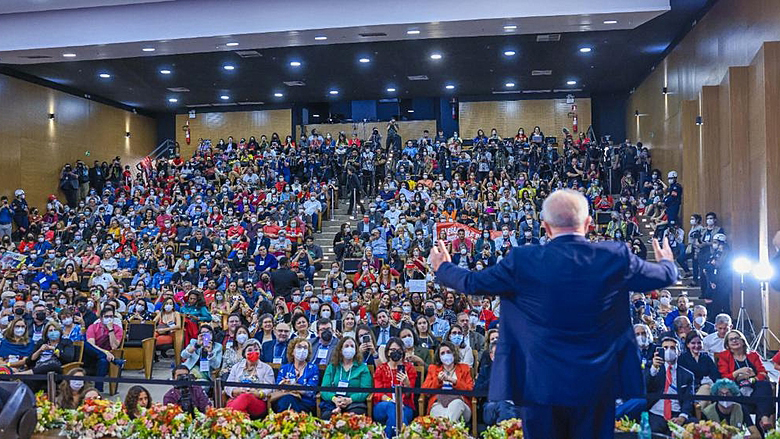